Walls in Palestine have sported "Free Palestine” for decades. But recently, inspired by the Arab Spring and the region's growing art scene, Palestinians have stepped up their creative game. Lena Odgaard talks to artists and activists about the significant increase of political street art in Ramallah. See photos of the tags, murals and slogans. 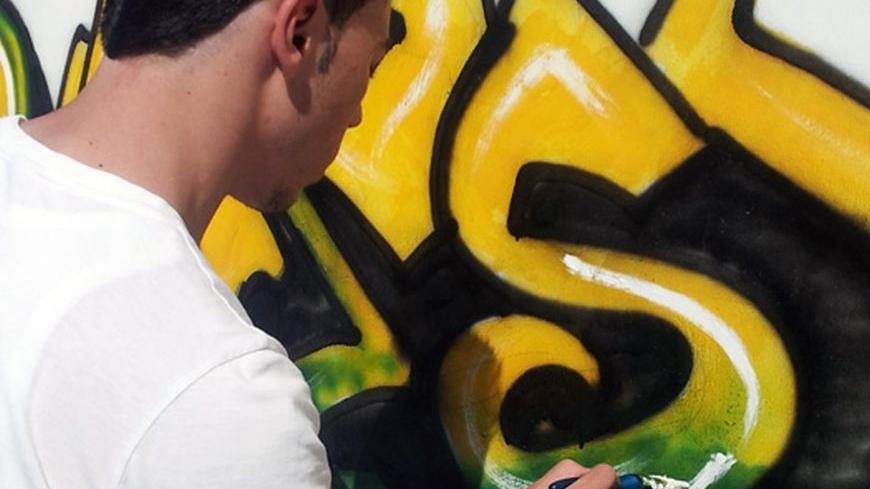 A young Palestinian tags the word "Palestine" in Bethlehem. While graffiti is illegal in most Western countries many Palestinians welcome the decoration of their houses’ walls, but expect the message to be sympathetic to the Palestinian struggle. - Lena Odgaard
August 27, 2012

RAMALLAH — The streets of Ramallah, on the West Bank, have seen a significant increase in graffiti over the past year, including drawings of Palestinians in Israeli jails, social media-inspired tags such as #OccupyWallStNotPalestine and religious symbols. While Palestinian graffiti had always been political and reflected the Palestinian struggle against Israel’s occupation, street art now puts a greater emphasis on aesthetics and originality, said Palestinian artist Majd Abdel Hamid. He attributes this recent development to what he describes as an "art explosion" following a wave of popular uprisings that swept through the Arab world, though not in the Palestinian territories.

”Street art in Palestine was boosted by the Arab revolutions, which led to a lot of graffiti all around the Arab world,” he said. Street art is used as an outlet for people to talk about big existential issues, which for years were repressed in countries ruled by dictatorships, he explained. The boom in street art in Egypt, Tunisia and Syria inspired Palestinian artists to address issues in their own community, most noticeably the hunger strike of hundreds of Palestinian prisoners jailed in Israel this past spring.

In Ramallah, few are the streets that don’t bear graffiti stencils of Palestinian hunger striker Khader Adnan, famously depicted with a lock over his mouth. Adnan was the first of many Palestinians to go on hunger strike to protest Israel’s widespread use of administrative detention, where prisoners are held, often for indefinite and renewable periods of time, without official charges. Following his example, around 2000 prisoners went on hunger strike in April 2012.That move inspired another Ramallah-based artist, Hamza Abu Ayyash.

”I could translate the message of the hunger strike in a visual way,” Ayyash told Al-Monitor, showing one of his drawings on Ramallah’s main street that depicts a muscular, faceless man with Israel and the Palestinian territories strapped onto his back with his own intestines. Ayyash explains that he sees himself as much as an artist as an activist: “Using the walls is the easiest way to spread an idea because everyone passes by a wall in a street — a politician, a housewife, a child, a doctor, or a homeless guy. Everyone.”

Ayyash’s faceless character can be spotted in eight other locations on the walls of Ramallah, where almost every drawing addresses the Israeli occupation. Although street art is currently tackling new themes, politics and especially the Israeli occupation remain dominant, as has been the case for decades, explained Khaled Horani who heads the International Academy of Art in Ramallah.

The changing nature of graffiti from one Intifada to the next

Historically, “the purpose of graffiti was to inform, like the media, because traditional media was not available during the first Intifada,” Horani said. Messages on the walls would encourage rebellions, indicate times and places of upcoming demonstrations and hold epitaphs honoring Palestinians killed by Israel, locally called martyrs. But as Israel’s occupying forces forbade such messages, there was no room for complex graffiti. Activists rather opted for written messages because they could be done quickly.

After the 1993 Oslo Accord, Israeli troops left most Palestinian cities, and when the second Intifada broke out in 2000, activists and artists were freer to draw at will on West Bank and Gaza city walls. This freedom sparked a new form of sophisticated colored drawings portraying fallen civilians and fighters in arms.

It was not until the end of the second Intifada, around 2005, that street art began to morph into a greater variety of paintings and elaborate stencils. Today, Horani sees self-censorship among artists as the main obstacle to the development of graffiti in Palestine. Supporting his assessment, Abdel Hamid says that artists often feel subjected to expectations from society that they should be “Palestinian enough.”

”There is this pressure that you are representing the oppressed. So if you are doing graffiti, it should attack Israel,” says Abdel Hamid.

Still, recent street art addresses new and sensitive themes such as religion, women’s rights, and internal politics. Earlier this spring, Abdel Hamid noticed the words "religion is dead" written on a wall by the hospital in the center of Ramallah.

”Obviously this is taboo and after a few days someone spray-painted over it. But it is interesting because it is an actual interaction between people where communication is going both ways,” says Abdel Hamid, adding that such statements were unthinkable just five years ago.

In Jerusalem, on the other side of Israel’s separation barrier, a group of Palestinian activists, most of them women, use graffiti to raise awareness about women's rights. One of the group’s stencils pictures a woman’s face wrapped in a keffiyeh, the checkered black and white Palestinian headdress usually reserved to men.

”The purpose of street art is to force your existence on somebody: putting it in people’s faces but still in a subtle and beautiful way,” says one of the activists who calls herself and the group "Thouri," or "Revolt" in Arabic. For her, the occupation is the main subject to denounce and draw about. But ensuring that Palestinian society evolves positively is almost equally important.

Thouri also tags street walls on the West Bank side of the separation barrier. But so far not on the actual wall separating Jerusalem from the West Bank though the eight to nine-meter tall concrete wall, which forms around 10% of the barrier, has inspired many graffiti artists from all over the world, including Banksy from England. According to Horani from the International Academy of Art there is no doubt that the separation wall has fostered the expansion and revival of Palestinian graffiti.

”The erection of the wall is a very violent action for the land and the human beings around it. But at the same time, it is a big grey canvas, which looks like it invites you to do something,” he said.

Though many artists, not least foreigners, have left their prints on the wall, many young Palestinian artists refuse to do the same.

“We don’t want the wall to be beautiful. It’s better that it’s something ugly because it makes people’s lives difficult,” says Reem Masri, a woman who belongs to a group of street artists from the International School of Art in Ramallah that calls itself "On the Walls." Ayyash is also against painting on Israel’s separation wall and argues that it would amount to accepting its existence. Thouri however has yet to make her mind up: “I understand the argument against it but historically, like with the Berlin Wall, it has been a great place for sending messages.

To Horani, the internal debate about the wall among Palestinian street artists is healthy and shows that though street art is still at an early and experimental stage, it is an evolving art form in Palestine.