Mohammad Sabaneeh, Palestine's controversial caricaturist, has published a book with his cartoons that has been collecting awards at home and abroad. 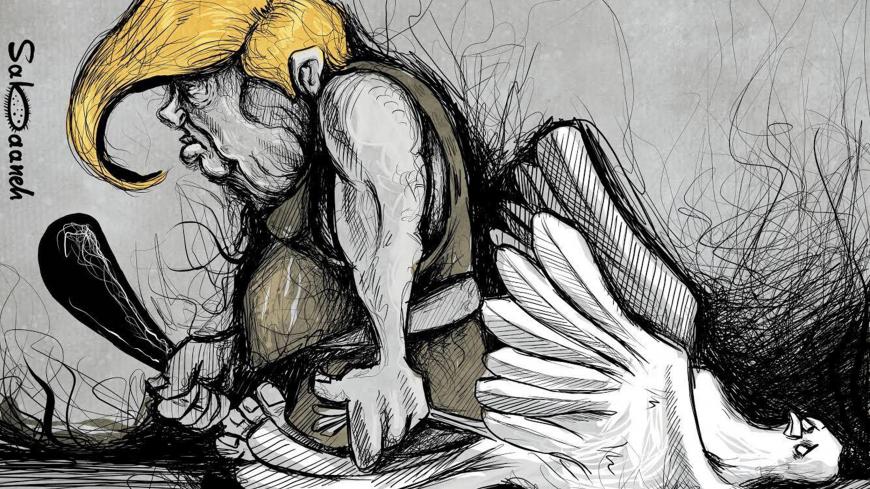 A caricature by cartoonist Mohammad Sabaaneh of US President Donald Trump dragging a dove of peace behind him. Posted Dec. 11, 2017. - Facebook/Mohammad.Sabaaneh

RAMALLAH, West Bank — As soon as US President Donald Trump recognized Jerusalem as Israel’s capital on Dec. 6 and announced moving the US Embassy from Tel Aviv to Jerusalem, Palestinian cartoonist Mohammad Sabaaneh started drawing caricatures on the subject, including one depicting Trump as Santa Claus offering a bag of gifts to an Israeli soldier that contains the crescent of a mosque and a church cross — a reference to Al-Aqsa Mosque and the Church of the Holy Sepulchre.

In another caricature, Sabaaneh drew a big head of Trump replacing his mouth with a toilet seat; a Palestinian child wearing the Palestinian keffiyeh is peeing inside his mouth. Another cartoon shows an Arab kissing boots that represent the United States, and offering Palestine.

Some of the works of the young Palestinian cartoonist were published by al-Haya al-Jadida, while Sabaaneh posted others on his Facebook page.

Sabaaneh is considered one of the most famous caricaturists in the West Bank and Gaza Strip. Sabaaneh, whose roots go back to Jenin in the northern West Bank, was born in Kuwait in 1979. He returned to the West Bank in the 1990s and earned a bachelor’s degree in fine arts with a specialization in interior design from An-Najah University in 2002. A member of the assessment committee of the Palestinian media competition and the international Cartoon Movement, he is now working as an administrator at the Arab American University in Jenin and as a cartoonist for daily paper al-Haya al-Jadida.

In November, Sabaaneh published his first book, titled “White and Black, Political Cartoons from Palestine,” that consists of 180 illustrations of which 90% have not been published before. The cartoons also include the ones he drew during his five-month detention in Israeli prisons after his arrest while returning from Jordan on Feb. 16, 2013. An Israeli court had sentenced Sabaaneh on charges of communicating with hostile parties, without specifying the parties or the nature of the communication.

Sabaaneh’s book launch Nov. 14 at the Mahmoud Darwish Museum in the West Bank city of Ramallah comes six months after its launch in English in the United States. Right after the US launch, Sabaaneh set out on a tour that included 22 events in 15 US cities and six meetings with students at major universities across the United States.

The book, which includes single cartoons and cartoon series, received an award at the 6th edition of the Festival international du dessin de presse, de la caricature et de la satire in France on Sept. 30. The festival included an exhibition of 30 illustrations by Sabaaneh on the suffering of the Palestinian people under occupation. He also received awards at home: Sabaaneh was honored by the Writers Union and the Journalists Syndicate in Ramallah on Nov. 14, and by the governor of Ramallah during an event Oct. 31.

Sabaaneh told Al-Monitor that the book is an important addition to the art of global caricature, “as it highlights the issues under which the people and homeland are suffering, not to mention the humanitarian and cultural messages it contains.”

He noted that what makes the book special is the creation of a new technique in drawing, where he carves his drawings on a linoleum block.

Sabaaneh said he first got the idea for the book in 2015, during an exhibition in Washington when he was encouraged by The Economist’s cartoonist Kevin Kallaugher. Kallaugher, after seeing some of Sabaaneh’s drawings at the exhibit and subsequently other sketches, urged Sabaaneh to produce more drawings and to collect them in a book.

“Kallaugher urged me to publish a book for the whole world to see, so I started contacting international publishing houses until I got the approval of Just World Books and signed with them in 2016,” Sabaaneh said.

For Sabaaneh, the book is considered a window for the world to know about life under occupation in Palestine and earn the public’s sympathy and support for the Palestinian cause. He believes this type of communication should be promoted and diversified.

The first of the five chapters is a series divided into sections titled “The Story of Palestine,” with each depicting a period in the history of Palestine from 1922 to 2016. The first chapter portrays the early years of the British Mandate of Palestine, with the cartoons depicting the policies the British army adopted, including the collective punishment of residents such as the destruction of houses and executions.

The book also includes the 1948 Nakba and the arrival of the Jews to Palestine. Several symbols of that era are portrayed, including warplanes, gallows, refugee tents and a key representing the Palestinians’ right to return. The other chapters portray the withdrawal of Palestinian militants from Beirut after its invasion by Israel, the start of the first intifada in 1987, the Oslo Accord signed between Israel and the PLO in 1993, and al-Aqsa intifada in 2000.

The last two chapters depict the period running from 2004 to 2016, which witnessed the expansion of Israeli settlements in the West Bank and Jerusalem, the completion of the wall and the wars on the Gaza Strip.

The book received broad acclaim among the world’s top cartoonists, according to Just World Books. “Despite working at a very complicated crossroads of ideology and political pressures, Sabaaneh continues to produce sharp, incisive cartoons. His tenacity and courage is an inspiration for cartoonists around the world,” said award-winning American political cartoonist Matt Wuerker.

Joe Sacco, author and illustrator and the man behind the book “Footnotes in Gaza,” wrote about Sabaaneh, “Each of Sabaaneh’s powerful drawings is like a gut punch that gets straight to the essence of the stark reality of Palestinian life under Israeli occupation. This is how an artist resists.”

Sabaaneh said that Dar al-Saqi publishing house in Beirut will collaborate with Just World Books to publish a new edition of the book for the UK and European markets early next year, pointing out that he is considering translating the book into German and other foreign languages.

He is currently wrapped up in a new art project, as he plans to paint large cartoons that will be exhibited at an international competition in Belgium in May 2018. He has already finished a large mural on the history of the Palestinian cause and is working on the next one with a universal humanitarian theme.

Caricatures have long been one of the most important Palestinian art forms of journalism in addressing political issues. “The art of Palestinian caricature is an avant-garde art in the Arab world, and it has been influenced over the past years by the general political situation,” he noted.

Sabaaneh’s political and social cartoons often cause controversy, especially when it comes to tackling the Palestinian division that has affected the Palestinian media. Sabaaneh said, “Differences [of opinion] lead to arguments. So my works are not always approved by all spectrums of the Palestinian public — which in itself is divided politically and geographically. So it is only normal that my cartoons create controversy and different reactions.”