Nuclear Deal with Iran May Hinge On European Sanctions Relief

Al-Monitor's Barbara Slavin reports that progress with Iran in upcoming nuclear talks might require Europeans to ease their embargo on purchasing Iranian oil. 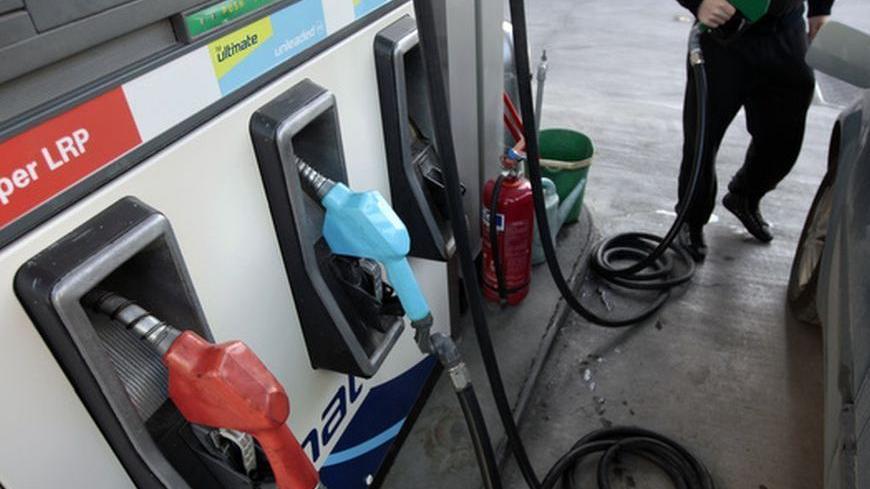 An employee of a gas station fills a car tank in Athens February 21, 2012. - REUTERS/Yorgos Karahalis

Progress with Iran in upcoming nuclear talks might require Europeans to ease their embargo on purchasing Iranian oil, experts on sanctions say.

The United States has accumulated such a complex variety of sanctions on Iran over the past three decades that it will be far more difficult to roll back American penalties against the Islamic Republic.

“The first thing they would do is ask the Europeans,” said Bill Reinsch, president of the National Foreign Trade Council, when asked what the Obama administration would do if Iran agrees to curb its uranium enrichment program. “The Iranians want some public backing off and under [US] sanctions, that would be very difficult.”

Reinsch, a former Commerce Department undersecretary and senior staffer on Capitol Hill, was among nearly 40 prominent former US officials to endorse a new study, “Weighing the Costs and Benefits of International Sanctions on Iran.”

The report, unveiled Thursday, Dec. 6, in Washington at the Carnegie Endowment for International Peace, makes no policy recommendations. But it underlines the difficulty of unpeeling an onion of US measures that have targeted a variety of Iranian policies, from its nuclear program to its support for groups the US regards as terrorist.

The sanctions include multiple laws that have codified presidential executive orders against Iran imposed since the 1979 Islamic revolution. Such laws, which have escalated in recent years, “add an element of concrete to the sanctions,” Reinsch said.

The report suggests that without clear incentives that include sanctions relief, a nuclear deal with Iran will be very difficult to reach.

“While the pain of recent sanctions may well help bring Iran to the negotiating table, it is not clear that these sanctions alone will result in agreements or changes in Iranian policies,” the report said. “If Iran were to signal its willingness to modify its nuclear program and to cooperate in verifying these modifications, Iranian negotiators would expect the United States and its allies, in turn to offer a plan for easing some of the sanctions. Absent a calibrated, positive response from the West, Iran’s leaders would have little incentive to move forward with negotiations.”

Kenneth Katzman, an expert on Iran sanctions at the Congressional Research Service, agreed that the US would likely look to Europe to lift its July 2012 embargo on purchasing Iranian oil in the event of real progress in the negotiations.

However, the Obama administration would have to act as well to make sure that European companies would not be penalized for purchasing Iranian oil under US legislation.

Under the fiscal year 2012 National Defense Authorization Act, which went into effect early this year, the US State Department has to provide waivers to countries that continue to purchase Iranian oil. In return, they have to show that they have “significantly” reduced oil imports from Iran.

Katzman told Al-Monitor that President Obama could exercise waiver authority contained in the legislation if sanctions relief was part of a package that verifiably prevented Iran from developing nuclear weapons.

The president could say, “Look at what we are getting. We are advancing our national security interests,” Katzman said.

Such an action seems hard to imagine at a time when the momentum in Congress is toward more sanctions rather than fewer when it comes to Iran. The US Senate recently passed a bill by a vote of 94-0 that would put yet more penalties on countries and companies that do business with Tehran.

US sanctions that bar banks from most dealings with Iranian financial institutions have had the biggest impact and are a factor in the increasing difficulty Iranians face in obtaining critical medicine and medical devices. Although the US Treasury Department quietly issued a ruling that US companies no longer have to obtain a license to send such items to Iran, the banking sanctions make US financial institutions reluctant to handle such trade.

“A lot of banks don’t want their names to appear in a press story” that they did business with Iran, Katzman said.

The new report warned that such adverse humanitarian consequences could cause sanctions to unravel and have other negative effects. “Sanctions do have the potential to produce human suffering that could be morally repugnant and that could undermine international support for sanctions, hurt the United States’ global image and credibility and contribute to further alienation of the Iranian public,” the report said.

Katzman said that some sanctions experts are talking about drafting legislation that would make explicit offers to roll back sanctions in return for specific Iranian actions to address US and international concerns about Iran’s nuclear program.

“People are starting to look more down the road,” Katzman said, worrying that “sanctions fatigue may be setting in.”

Iran has made clear that sanctions relief has to be part of any nuclear deal and has rejected a US-blessed offer for aircraft spare parts and peaceful nuclear technology in return for stopping its uranium enrichment program.