Iran has suffered a series of horrific crashes of old planes in recent years. Barbara Slavin writes that spare parts have been a perennial US offer to induce Iran to change its ways. While it's theoretically possible for Iran to buy spare aircraft parts directly from US firms, Iran faces nearly insurmountable hurdles in obtaining the parts. 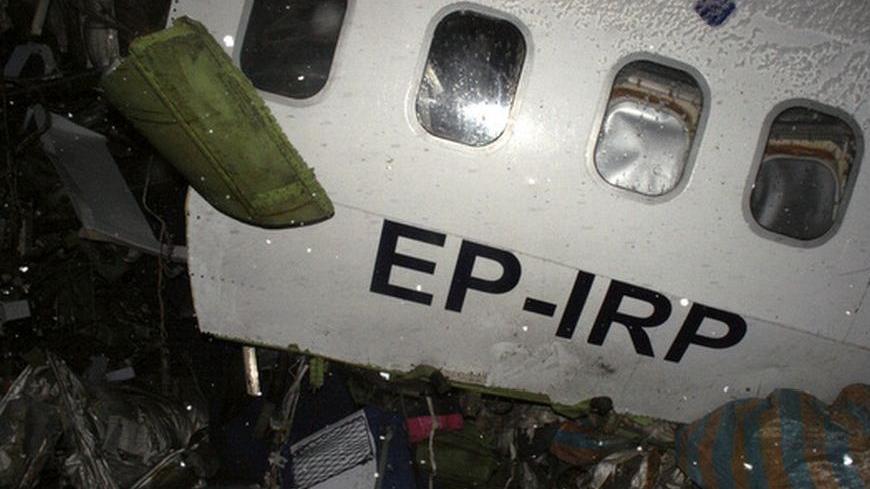 The wreckage of the Iranian Boeing 727 airplane is pictured after it crashed near Urumiyeh in East Azermaijan province about 946 km (588 miles) northwest of Tehran January 9, 2011. - REUTERS/Stringer

When the United States and its negotiating partners offered last month to sell spare aircraft parts to Iran in return for nuclear concessions, they were dangling a carrot almost as old as much of Iran’s civilian airline fleet.

Spare parts have been a perennial US offer to induce Iran to change its ways — or to reward it for positive steps — and were almost provided 20 years ago near the end of the George H.W. Bush administration, Al-Monitor has learned.

According to Brent Scowcroft, national security adviser to the first President Bush, the administration’s various departments recommended in late 1992 to allow such sales for Iran’s vintage Boeings but left the final decision to the incoming Bill Clinton administration.

The Clinton administration took no action initially and instead imposed a policy of “dual containment” of both Iraq and Iran that included an embargo on nearly all trade with and investment in Iran. The policy was eased slightly in 1999 and 2000, and the administration gave permission to a Lufthansa subsidiary to provide spare parts, repairs and maintenance to Iranian civilian airliners in Germany, according to Thomas Pickering, who served as undersecretary of state from 1997 to 2000.

In an email, Pickering, who went on to be vice president of Boeing for international affairs from 2002-2006, said Clinton eased the sanctions after a number of Iranian aircraft accidents. The policy “apparently lasted into Bush 2 [the administration of George W. Bush] when it was rescinded,” Pickering wrote.

Iran has suffered a series of horrific crashes of old planes in recent years. The latest occurred on January 9, 2011, when a 37-year-old Boeing 727 disintegrated while trying to make an emergency landing in bad weather near the city of Orumiyeh in northwestern Iran. Seventy-seven of the 105 people aboard were killed.

According to the Iran Civil Aviation Organization, Iran’s fleet includes 31 Boeings, among them nine 727s — a plane that first went into service in 1964 — as well as a number of 747s — the iconic double-decker jetliner that first flew in 1970 and that has not been manufactured since 1986.

Iranian hopes to be able to buy parts and planes rose after the first President Bush promised Iran in his 1989 inaugural address that “goodwill begets goodwill.” The comment was an inducement to Iran to help free remaining US hostages held by pro-Iranian groups in Lebanon. Iran eventually did so but got nothing tangible in return — only a UN Security Council statement blaming Iraq for starting the 1980-88 Iran-Iraq war.

President Clinton, after imposing a near-total embargo on Iran in 1995, loosened restrictions in his second term in response to conciliatory gestures from the government of then-Iranian President Mohammad Khatami. New sanctions were imposed by the George W. Bush administration and have intensified since 2010 under Barack Obama.

Theoretically, however, it has been possible for Iran to buy spare aircraft parts directly from US firms since 1995.

An official from the US Treasury department, who spoke on condition he not be named, told Al-Monitor in an email that according to US regulations that went into effect at the time of the 1995 embargo, “specific licenses may be issued on a case-by-case basis for the exportation and re-exportation of goods, services and technology to insure the safety of civil aviation and safe operation of US-origin commercial passenger aircraft.”

Despite this humanitarian loophole, Iran faces nearly insurmountable hurdles in obtaining the parts from US companies, said Erich Ferrari, a Washington lawyer who advises governments and individuals on the intricacies of US sanctions law.

“The larger problem is that even if OFAC [the Treasury’s Office of Foreign Assets Control] issues the license, what US firm will supply the parts?” he told Al-Monitor. US companies fear the “reputational risk” of dealing with Iran, he said.

A second hurdle is payment. US sanctions on most Iranian banks, including its Central Bank, have left a dearth of authorized financial channels.

“There are a couple of legal routes but they are very shaky, hard to deal with and take a long time,” Ferrari said, adding that similar problems plague Iranian purchases of US medicine and medical goods, which are also technically legal to sell to Iran under the humanitarian exemption to sanctions.

A final obstacle, he said, is that Iran’s two biggest airlines — Iran Air and Mahan Air — are under separate sanctions for alleged connections to Iran’s Revolutionary Guard Corps, terrorism and the shipment of materials related to weapons of mass destruction.

Pickering said that while it is true that the provision of spare parts is theoretically possible, “to make it happen, legally, seems like an insuperable obstacle even if OFAC were to agree to honor a request. My own view, irrespective of the Boeing connection, is that safety of life on aircraft makes the use of sanctions of that kind very hard to justify.”

According to an Iranian source who spoke on condition of anonymity, over the past three decades Iran has been able to buy — paying a premium of from 10 to 40% — both Boeing parts and old planes from third parties.

Iran would prefer to buy such parts directly from Boeing as well as to purchase new jets.

In addition to spare aircraft parts, the P5+1 (the five permanent members of the UN Security Council plus Germany) have offered Iran fuel and safety upgrades for a reactor in Tehran that makes medical isotopes. In return, Iran has been asked to stop production of 20% enriched uranium, send out its stockpile of more than 100 kilograms of that uranium and close a facility buried in a mountain near Qom where much of the enrichment takes place.

The offer is less generous than one made in 2008 under the Bush administration.

A June 14, 2008 letter to then-Iranian Foreign Minister Manuchehr Mottaki from the foreign ministers of the P5+1 states lists a variety of trade and investment incentives including “the possible removal of restrictions on manufacturers exporting aircraft to Iran” in return for Iran suspending its uranium-enrichment program.

Iran, which suspended some aspects of its nuclear program from 2003 to 2005, has hinted that it would stop enriching uranium to 20% but only in return for recognition of what Iran regards as its right to enrich uranium to lower grades. Iran also seeks postponement of upcoming European sanctions on Iranian oil and the transfer of Iran’s nuclear file from the UN Security Council — where it was referred in 2006 — back to the International Atomic Energy Agency.

A third round of talks between Iran and the P5+1 is scheduled June 18-19 in Moscow. It is hard to foresee a breakthrough given what is on offer to Iran.