Hamas and Fatah No Closer To Settling Their Differences

Fatah and Hamas, despite their conciliatory language during the latest Gaza Strip conflict with Israel, aren't about to reconcile, writes Dalia Hatuqa from Ramallah. 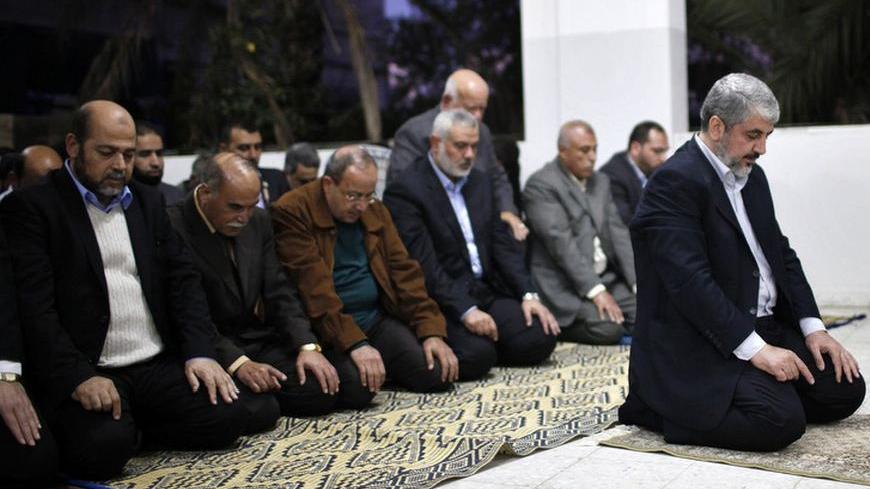 Amid the unprecedented West Bank celebrations marking the 25th anniversary of Hamas’ founding, questions are arising as to whether the Islamist Movement and Fatah are finally one step closer to reconciling their political differences.

Just several months after establishing a unity government in 2006, fighting broke out between the two groups’ respective affiliates, which escalated into a brutal series of street battles throughout the Gaza Strip (less so in the West Bank), ending when the Islamic movement routed Fatah’s forces and assumed full control of the coastal enclave.

Several attempts at reconciliation ensued in the aftermath, but in 2011 a general agreement was signed between the two parties in Cairo. It failed to materialize, and a year later, Palestinian Authority (PA) President Mahmoud Abbas and Hamas politburo chief Khaled Meshaal signed another agreement in Doha, this time laying out specifics of implementation, but, it too, was largely not implemented on the ground.

Conciliatory language between the two, however, started to surface last month during the height of the most recent conflict in Gaza. Telephone calls were exchanged between Abbas and Meshaal and an unprecedented rally took place in Ramallah’s al-Manara Square, where the Islamic movement’s green banners were visible for the first time in years.

Since the separation of the two parties was formalized in 2007 (with Hamas governing the Gaza Strip and Fatah comprising the PA which runs the West Bank), Hamas was driven underground for a while in the West Bank thanks to a crackdown led by the PA’s security services and Israel’s military.

Since a cease-fire was secured in Gaza, Hamas and Fatah seem to have reached an understanding with one another that loosens the previous restrictions held concerning public activities and visibility. This week, rallies took place across the West Bank in Hebron, Tulkarem and again in the Fatah stronghold of Ramallah. Further, a Hamas representative has been invited to meetings of the PLO’s senior leadership in Ramallah.

Despite the many challenges lying in the way of national unity, Ghassan Khatib, a lecturer at Birzeit University’s Cultural Studies program, spoke of the most obvious and practical factor holding back reconciliation: Israel’s occupation of the West Bank and Gaza Strip. He said, “The fact that Israel in the past has torpedoed a unity government which included Hamas, means this will happen again.”

Israel’s Prime Minister Benjamin Netanyahu erased any discrepancy which may have surrounded this issue when he stated that a reconciliation agreement would close the door to any future peace talks, warning Abbas that he could choose between “peace with Hamas or peace with Israel. You can’t have them both.”

This comes in contrast to the optimism prevailing in the upper echelons of the parties themselves and the Palestinian elite (Munib Al Masri, Palestinian business magnate and unity supporter, was said to be in Gaza for Hamas’ 25th anniversary celebrations). It is worth noting that it is not the first time Palestinians have seen reconciliation come within reach only to fall apart. “I am pessimistic,” Khatib told me. “The split is irreversible at this time, the factors that led to it are still in effect and there are new factors playing into it [the split] as well.”

As Egypt’s new Muslim Brotherhood-led government played a main role in securing the cease-fire between Israel and Hamas last month, it has also guided efforts to obtain a rapprochement by inviting the parties to Cairo (even though these talks have been delayed by domestic political issues in Egypt). Khatib believes that the new Egyptian leadership has emboldened Hamas into thinking it is part of the ascendant tide of political Islamism in the region and that Fatah’s old guard — in its current state — does not fit into this emerging equation.

“In reality, both sides, and more so Hamas, have developed vested interests in new realities being further consolidated with time, [thus] preventing a real possibility of reconciliation,” Khatib said.

Fatah may be feeling the pressure, as several exchanges between Abbas and Hamas’ leadership (both in exile and in Gaza) resulted in the dispatching of Fatah Central Committee member Nabil Sha’ath to the Gaza Strip. Sha’ath wasn’t alone in his tour; high-ranking members of the newly-formed Islamist governments of Tunisia, Egypt and Turkey also made their way to the coastal territory during the war to show solidarity.

Meshaal himself returned to Gaza last weekend after the ceasefire was secured, marking the first time he had stepped foot on Palestinian land in 37 years. The Hamas chief delivered an uncompromising speech — gone was the talk of 1967 borders or any of the moderate rhetoric he espoused in earlier remarks.

The recent fanfare in Gaza and the West Bank leads many here to believe that this may signal the imminence of a more formal reconciliation. What currently stands for now is a détente, which is a direct result of grassroots public pressure, not the result of political will within the parties themselves. This lack of actual motivation has transformed national unity into a public relations exercise for both parties.

The PA and Fatah especially felt the heat during the height of Gaza conflict, as Palestinians in the West Bank — geographically isolated from their compatriots in the Gaza Strip — viewed Hamas’ ability to lob rockets at cities as far as Tel Aviv and Jerusalem as a restoration of national dignity. Further, through the terms of the ceasefire reached, Hamas was able to extract concessions from Israel, such as a halt to targeted assassinations of the group’s members and a lessening of movement restrictions at land and sea for farmers and fishermen.

As the PA searches for means of gaining legitimacy in light of a growing economic crisis and a moribund peace process, and with Hamas looking to its regional allies to build on its perceived gains, and with the ascension of ‘mini-Hamases’ emboldened by the recent conflict, the prospect of a reconciliation seems more dream than reality.