Giandomenico Picco worked with the notorious Imad Mughniyeh to free Western hostages 20 years ago. The talks were so secretive that Picco has only just revealed that Israeli intelligence confirmed Mughniyeh's identity. As Iran nuclear talks escalate, the veteran negotiator suggests using "out of the box" solutions and showing a little respect. 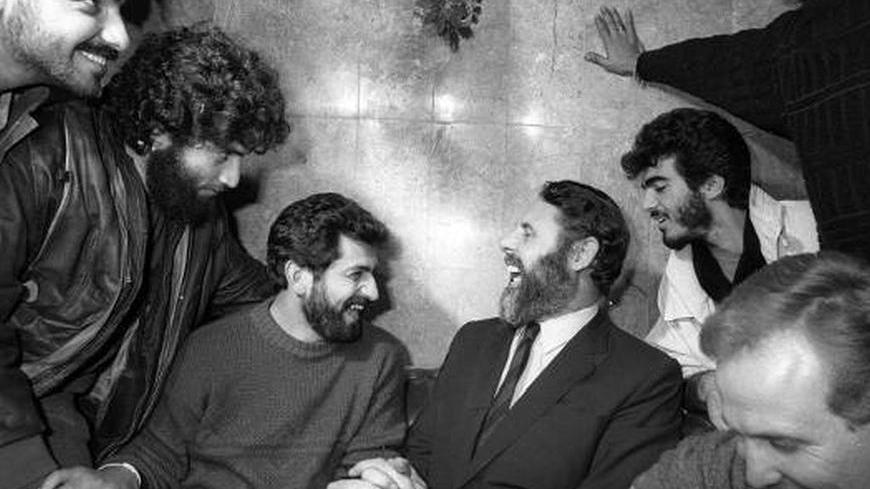 British church envoy, Terry Waite jokes with his bodyguards after he held a press conference at the Summerland hotel in west Beirut December 20, 1985. - REUTERS/Ramzi Haidar
February 8, 2013

In my efforts to free Western hostages in Lebanon in the early 1990s, I often had to do  unorthodox things—such as allowing myself to be blindfolded and taken by masked men to unknown places in the middle of the night to meet masked interlocutors.

According to an Israeli intelligence official who I subsequently met, one of my hosts was none other than Imad Mughniyeh, the notorious Hezbollah intelligence chief and liaison with Iran who was killed in Damascus, most likely by an Israeli hit team, in 2008.

In my first encounter with Mughniyeh, he made it clear to me that he did not expect me to be “impartial” for he knew well that snatching innocent people from the streets of Beirut and detaining them for years was “wrong.” He added, “We have no other tool,” implying that if I had a better suggestion, he would be glad to hear it.

Having been involved in face-to-face negotiations in other cases, I have long learned that  “impartiality” does not exist. We all have our own narratives, both national and individual, that are the core of who we are and what we do.

Thus the key to successful negotiations with adversaries is to discover—not to share necessarily—“some” or “one” page of their narrative, for there is the soil in which the roots of their decisions are born.

In the case of the Lebanon hostages, the solution was something out of the box that I called “the truth for freedom deal.” The U.N. Secretary General issued a report that blamed Iraqi leader Saddam Hussein for initiating the 1980-88 Iran-Iraq war. There was no direct “payment” by the United States.

I should add that Iran accepted our time sequence: hostages first, report later. Iran then put pressure on Mughniyeh and Hezbollah to free the hostages. Indeed, the Revolutionary Guards Iran sent to Lebanon cooperated, as was personally admitted to me by a  legendary leader of that group.

In these days of unending articles about inevitable war against Iran and bellicose declarations by various leaders who seem unable to lead without an enemy, it is important to note that over the past three decades, Iran and the West have negotiated at least 12 times—including my own experiences and those directly related to me by others. In almost all these cases, there were positive results.

Negotiations have now restarted with Iran on its nuclear program. Could they be affected positively by other issues which may impact one of the pages of the respective narratives?

Dare I suggest, a “minilateral” approach to Afghanistan that could put that country at a table with Iran, the United States, Saudi Arabia and a few others? Or, perhaps, agreeing on an "out of the box" solution to the European Union’s long-standing request to post an EU representative in Tehran—a “unique” solution without precedent, yet one which would impact the local narrative?

Some aspects of negotiations have changed over the last 20 years. There are many more variables now than during the Cold War, not least because we have gone from a concentration of power in two countries to a reality in which almost anybody can be a superpower for 15 minutes.

More germane to the nuclear negotiations, the West has become less “important” for Iran and the larger Middle East has increased its weight for countries such as Iran and Saudi Arabia.

In 1994 at an unofficial encounter in Europe, a high-level Iranian official once asked a high-ranking U.S. military man why the U.S. had not sought negotiations with Iran when it was offering a strategic agreement with North Korea. “Are we lesser beings than the North Koreans,” the Iranian implied.

The challenge thus remains for both sides: can our narratives afford leaders who can lead without an enemy?

Giandomenico Picco is a former Assistant Secretary General of the United Nations for Political Affairs and veteran negotiator with Iran who helped free 11 Western hostages in Lebanon. He is the author of “Man Without a Gun: One Diplomat's Secret Struggle to Free the Hostages, Fight Terrorism, and End a War” and of an upcoming book, “The Fog of Peace.”