While it's indeed conceivable that the Muslim Brotherhood may not succeed in wowing voters and the world with their management of Egypt, and there is ample room for missteps, the odds seem stacked against an outright failure, writes Bassem Sabry for Al-Monitor. 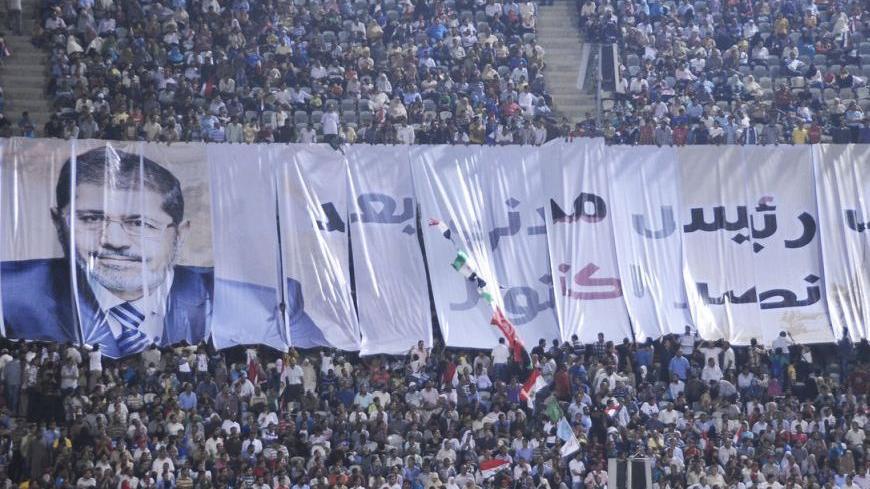 A giant banner of Egypt's President Mohammed Morsi, which reads, "Morsi is the first civilian president," is pictured as Morsi addresses the nation at Cairo stadium Oct. 6, 2012. He said he had fallen short of goals he promised to fulfil in his first 100 days in office, but aimed to assuage critics by highlighting his most prominent achievements. - REUTERS/Egyptian Presidency/Handout

Perhaps as a psychological defense mechanism against potential Muslim Brotherhood victories in the coming elections as well as the continued enlargement of President Mohammed Morsi’s and the Brotherhood’s circle of national power and influence, some on the opposition-sympathizing side seem to be trying to hedge their bets on the idea that Morsi and Brotherhood would dominate all the national seats and loci of power. However, their bet goes on, while additionally citing Morsi’s inability to fulfill most of his promises for the first 100 days in office, Morsi and the Brotherhood would then inevitably fail in managing the country throughout this difficult national juncture and push people in consequence toward the opposition in the following elections.

Approaching this dubious line of argumentation: While it's indeed conceivable that the Brotherhood — much like any other entity in their shoes in such a difficult time — may not necessarily succeed in wowing voters and the world with their management of the state, and while there is indeed big room for missteps, the odds seem stacked up against an outright failure.

First, the Muslim Brotherhood have pretty much found themselves heading a country at subzero conditions, as one friend puts it, and merely returning it to something resembling its previous condition could be touted as an achievement. Stabilizing it even could also be spun as such. And as social adaptation kicks in, more Egyptians will learn how to better survive or even relatively move forward in the current conditions.

And, despite everything, there is still a decent chance that the global economic environment might somewhat rebound fairly soon (assuming Europe manages to stabilize), necessarily having some positive influence on Egypt's and the region’s overall economy and social conditions. In addition, the global community is very unlikely to encourage (intentionally or unintentionally) Egypt and its Islamist-led government to shift into a relatively more-autarkic domestic policy, or further towards a more regional or Sino-centric dependency. Instead, an open Egyptian economy that trades with the world, and an Egyptian foreign policy that does not see cooperation with the West as a cosmetic afterthought, both form obvious political, social and geopolitical critical benefits and needs for the international community. Every major economic and political actor is thus expected to work toward that target, and to build long relationships with Egypt’s - and the region’s - new political powerhouse.

It is also highly doubtful that the international community — still negotiating various aid and support arrangements with Egypt — would risk lengthy domestic branding as having bailed out on Egypt in difficult times despite earlier promises to help, or as having demanded in return “evil neoliberal reforms” that ended up (the projection goes) squashing Egypt’s most vulnerable in a time of upheaval and uncertainty. Stories of how “Nasser defeated the World Bank and the West in order to valiantly build the high dam on our own terms as a nation” are still recounted to this day. And again, it's also unlikely that the international community, particularly the West, would not do what is in their powers to stop the Egyptian economy from collapsing. Other than regional logistic and economic repercussions, certain longstanding ideas in many policy circles have held that such a collapse could potentially create more pockets of militant activity within the country and outside of it, and that the collapse’s potential repercussions on domestic debate and politics would be hard to foresee (whether by moving further to the left or the right, genuinely hard to project.)

Furthermore, much of what the Muslim Brotherhood itself (in its original capacity as well as the FJP, independently and within the executive and legislative branches) has to do to win a second term leading the country appears incredibly straightforward: focusing on technocratic and consensus policy areas that need true and urgent reform (economy, bureaucracy, transport, beautification, food and agriculture, etc.), establishing a reputation as regularly reaching out to the opposition and various local groups to work together and to create national-consensus solutions, espousing a positive reconciliatory rhetoric, avoiding military adventures, and getting an occasional political home run and PR stunt, something they are becoming increasingly adept at generating.

And with the overall situation being quite difficult in Egypt right now, even the most basic and logical decisions and reforms could have a wide impact on national or community levels. Divisive policy issues (particularly social or cultural ones) could be delayed for a later time, which would have the benefit of allowing more time for the formulation of more out of the box and less controversial approaches and solutions as well as more time to settle comfortably into office. Even attempts to portray the Muslim Brotherhood as religious hardliners would be much weakened in effect given the presence of strong political Salafism in Egypt, the apparent rise of religious Salafism in general within the region, as well as the fact that the rhetoric of the Brotherhood has thus far attempted to eschew needless controversy, and at times even appeared quite positive in message and phrasing.

That is not to say Morsi and the rest of the Muslim Brotherhood can never fail this first test in office, because that would be a ludicrous statement to make and because even the external factors that should normally be aligned at the moment on their side could go horribly wrong for more than one reason. But even if the opposition and opposition-sympathizers could legitimately try to primarily bank on the Brotherhood to fail, it would just be plain bad and unacceptable policy in a time of national crisis.

Instead, this is the time every political force should engage the public with its own vision and ideas, rather than just bet on the reigning force to collapse and potentially take down the country with it.