Egyptian President Mohammed Morsi has rebooted Egypt's international image. He has maintained foreign relations with Egypt's friends, while moving away from some and toward others, all without alienating the international community. Paul Salem, director of the Carnegie Middle East Center in Beirut, writes that Morsi could return Egypt to its role as the heart of the Arab World — which would benefit the region. 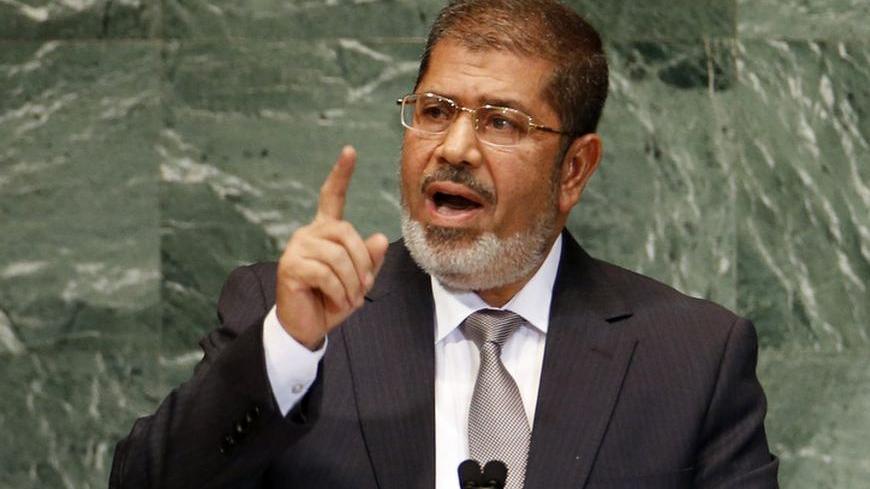 While his first foreign trip was to Saudi Arabia, Morsi also visited Iran and sought to include it in regional conflict management. Though he wants to maintain close relations with the West, he first went to China. He has put Egypt at the forefront of diplomatic efforts to address the Syrian crisis, and he indicated to the United States that Egypt’s peace treaty commitments are linked to unfulfilled U.S. promises to bring about justice and self-rule for the Palestinians.

Morsi’s early moves as president should not be surprising. Any new president, whether from the Muslim Brotherhood or other segments of the recent Egyptian revolution, would want to differentiate himself from the policies of the Mubarak regime. Regionally, Mubarak had chosen full alliance with Saudi Arabia, Jordan, and the UAE in the so-called “Alliance of Moderates” against Iran and its “Axis of Resistance.” He had built warm relations with Israel’s prime minister, Benjamin Netanyahu, and previous Israeli governments while maintaining the siege of Gaza. Internationally, Mubarak had chosen full alliance with the United States, although that didn’t seem to help him much in his final hour of need.

Morsi is also eager to build a high profile in foreign affairs to shore up his new presidency domestically. Progress on Egypt’s internal challenges — especially those related to economic growth and job creation — is going to be very slow. And there will be many political and economic disappointments along the way. Regaining Egyptian prestige regionally and internationally, largely lost under Mubarak, will help Morsi in the difficult months and years ahead.

But Egypt’s foreign policy is also based on a number of constants. Most important is that Egypt’s foreign policy must serve its desperate economic need for foreign investment, trade, aid, economic growth, and job creation. The Egypt of today is not the Egypt of Gamal Abdel Nasser. In the 1950s, Egypt was the most economically and militarily advanced and powerful country in the Arab world; Today, it is one of the poorest, and unable to project financial or military power.

The Muslim Brotherhood feels this domestic need even more acutely than the previous regime, because it is in touch with the poor and unemployed. It is also well aware of the success of the Islamists in Turkey in achieving political gains through rapid and sustained economic growth.

Morsi recognizes that to start down the road to growth, Egypt has to have good relations, not only with the oil-rich states of the Arab Gulf, but also with other regional economies like Turkey and Iran; not just with the United States and the West, but with other economic powerhouses such as China, India, Russia, and Brazil. For Egypt to take advantage of a diversified regional and global economy, it has to have a more inclusive pattern of regional and international relations.

Another constant is Egyptian national security. Morsi is concerned, as Mubarak was, about threats to security in the Sinai Peninsula. He has made it clear to Hamas that if Egypt is to work with the movement to improve the situation in Gaza, Hamas will have to close the smuggling tunnels across the Egyptian-Gaza border and cooperate in closing down smuggling and terrorist networks in the Sinai.

Morsi’s Egypt also needs to maintain the peace treaty with Israel. It cannot afford the alternative, and has to have good relations with its African neighbors to the south in order to maintain vital water flows down the Nile basin. Unlike Saudi Arabia, Iran, or even Qatar, which have massive energy revenues to sustain them, Egypt is a large country with very little leeway. Its foreign policy cannot drift very far from its pressing economic and security needs.

Egypt also has an interest — for both security and economic reasons — in a stable Middle East. And Morsi has correctly surmised that the politics of division and competing axes has only brought instability to the region. His initiative to bring together the big players—Turkey, Iran, Saudi Arabia, and Egypt—to help resolve the Syrian crisis is well placed. It might not achieve success in its immediate goals, but Morsi is correct in proposing that Arab-Turkish-Iranian relations should be based on communication, negotiation, and attempted cooperation, not on continuous isolation and confrontation. He is also correct in asserting that regional leaders should take primary responsibility for regional affairs and not rely on external players.

How far Morsi can take Egypt’s new role is an important question. He would like to have good relations with the Arab Gulf countries as well as Iran, but that will provoke Saudi Arabia and others. And those states can bring heavy economic pressure to bear on Cairo if they so desire. Morsi hopes to maintain good relations with the United States as well as China and Russia. But what if the United States puts pressure on Cairo to “choose sides” as happened during the administration of George W. Bush?

President Morsi is eager to build on the newfound popularity and legitimacy of post-revolutionary Egypt as well as the influence of the Muslim Brotherhood to gain more flexibility in Egypt’s foreign policy and to rebuild Egypt’s leadership role in the region. And the Arab world needs Egypt to help resolve regional conflicts and to build regional stability, as well as to represent a commitment to democratic government in the Arab world amid regional forces that still favor autocracy or a return to pre-modern times.

Countries in the region should join Egypt in its attempt to foster cooperation among them. Their first task is to work together to stop the killing in Syria and push for a political transition to a post-Assad future. But even if they don’t succeed in Syria, the return of Egypt to an independent and centrist foreign policy should be welcomed. Egypt is indeed the heart of the Arab world. If it succeeds in building a stable, democratic, and prosperous society, it will have profound positive effects on the rest of the Arab world. And if it resumes a leadership role in the region within that context, that influence will have a positive and lasting impact.

Paul Salem is the director of the Carnegie Middle East Center in Beirut, Lebanon.