Libyans Fear for Their Future In Rocky Transition to Democracy

Libyans are split on whether the fragile transition will lead to better days, or further instability and strife, reports Eileen Byrne from Tripoli. She visited Tripoli as a guest of the Libyan Culture Ministry's Media Development Centre, which paid for her accommodation there during its First International Media Forum. 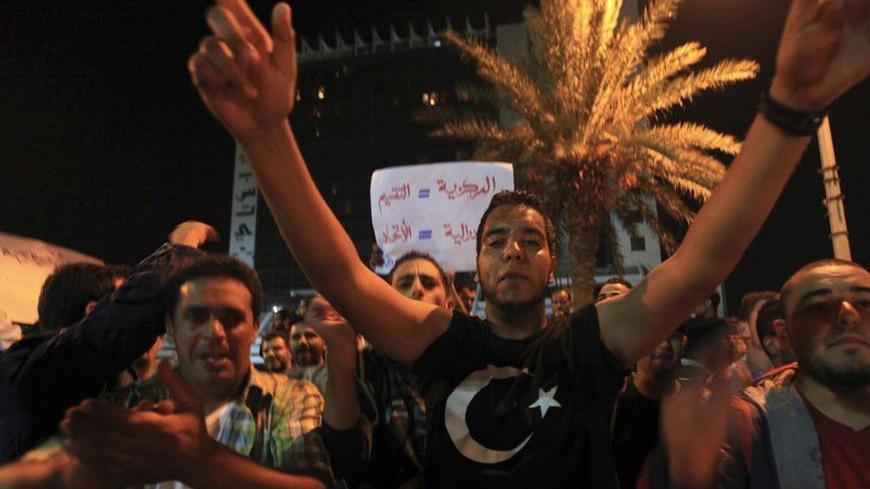 Protesters demanding federal governance and a branch of the National Oil Corp. to be set up in the country's second-largest city, in Benghazi, Nov. 26, 2012. - REUTERS/Esam Al-Fetori
December 20, 2012

TRIPOLI — Libya today is at the crossroads between a rocky process of transition to democracy and the real chance of collapse of state structures and rising violence. The next six months will be crucial, say analysts based in the country. The optimists see the elected government gradually extending its reach nationwide, as ex-militiamen continue either to return to civilian life, or to be absorbed into the police and army.

Political leadership will be key, as will a willingness by Libyans to work together in ways they had little experience of doing under a dictatorship. The legacy of distrust left by the Gadhafi regime hangs heavily over this nation of 6.7 million people, and the intensity of its post-revolutionary drama makes developments in next-door Tunisia look sedate by comparison.

The pessimists look out onto an urban landscape of shattered concrete, where unidentified bodies are still being disenterred from newly discovered mass graves. The checkpoints outside towns which until recently were manned by "thuwar" ("revolutionaries") are now more often manned by men in army or police uniforms, but gunfire is still heard at night in Tripoli, Benghazi and smaller towns like Gharyan. Last year's fighting has sown bitter new enmities. And for the pessimists, regional instability emanating from northern Mali could yet undermine Libya's transition.

The July election produced a National Congress dominated by no clear party bloc — the result of an electoral system which reserved for independent candidates 120 of the 200 congressional seats. Prime Minister Ali Zidan has succeeded in putting together a cabinet, and together with congress president Mohammed Magarief is holding together a fragile political consensus. But there are concerns that congress's Transparency Committee, which has been vetting ministerial candidates, is not allowing a sufficiently strong government to emerge and itself lacks transparency over its decision-making.

Advice will not be lacking from foreign NGOs and experts on the mechanisms for a successful democratic transition on transparency and media freedom, judicial reform, "transitional justice" and so on. But the precondition for progress will be a government whose writ runs throughout the country, and an easing of the underlying tension that is inevitable in a society that is still to a large extent under arms.

Many regular police have not reported back for duty. Libya's "security forces" are at present an amalgam that includes ex-militias who have agreed, in principle, to accept a line of command ending with the civilian politicians in Tripoli, while other militias remain outside any such structure. Advice on reorganizing the army is being provided by the British, among others, and the US is reportedly continuing to offer assistance on creating anti-terrorist units; this is inevitably a more sensitive area for Libyan public opinion than advice on political reform.

In Benghazi, Libya's second city, armed attacks on police stations have continued, as have clashes between the security forces and recalcitrant militia groups — some reportedly with an Islamist coloring. But talk on the streets is now more often about an overlap between rump militias and emerging networks of organized crime which are said to be introducing cocaine and other novelties to the city. Following the death of US ambassador Chris Stevens on Sept. 11 there was a grassroots push against certain Benghazi militias and a security crackdown. But the city's security chief, Col. Faraj al-Dersi, was last month shot dead in a killing for which responsibilities have not yet been assigned.

Under the slogan "Who rules us?" young Benghazi activists organized a demonstration in early December calling for the investigation of this and other recent killings among security service officers. They demanded the disbanding of all militias in the city "whether approved or unapproved." Meanwhile, as one young man from Beni Walid put it, "bad stuff" such as kidnappings and torture no doubt continue to happen, largely unreported, in various corners of the country. Amnesty International has highlighted mistreatment of illegal immigrants in detention centers under the de facto control of militias — who also continue to hold some thousands of fellow Libyans outside any legal framework.

The current flux and improvisation is symbolized by building projects on hold and reconstruction work not yet begun. Figures cited by the old regime are as uncertain as anything else: the World Bank has adopted a working estimate of unemployment at 26%, for example, compared to a previous official figure of 15%.

As often in transitional periods, rumors abound, not least concerning the myriad government agencies that are a hangover from the Gadhafi era; some are said to enjoy hefty payrolls and budget allocations made before the revolution, now with little accountability. If the country is to truly modernize, says a younger private-sector IT operator, civil servants will have to learn new habits of transparency in awarding contracts, abandoning longstanding habits of cronyism.

Sick and tired of the way he permeated their lives for 42 years, Libyans allude to Moammar Gadhafi indirectly, as "the man," "the buried one" ("el maqbur") or "the tyrant." However, in the ministries, as in the political world, the dividing line between the old regime and the new Libya is often blurred. Already the refrain is heard that "nothing has changed. It is the same people in charge," not least in the hydrocarbons sector.

With the security outlook still hazy, there is a tendency to fall back on old reflexes of top-down control. A proposed new ministry of information would introduce order into a chaotic "free-for-all" of new media, officials argue. At a recent conference on media independence, the organizers formulated a demand for a special court or tribunal to judge infractions by journalists.

Some of the optimists look backwards for inspiration, to a period before Gadhafi when, they say, the average Libyan was impeccably ethical and Tripoli an open, internationally minded city. Television channels fill spare air-time with footage of a spotless, ordered Tripoli in the early 1960s, before the charismatic young colonel seized power. But if the country eventually emerges from its revolution with solid democratic institutions, and with largely transparent handling of its oil revenues, it will be because Libyans of various backgrounds have shown a determination to move on and to build something significantly different from what they have known in the past.