The release last week of Shadi al-Mawlawi, a Sunni Islamist whose arrest sparked bloody clashes, may have temporarily brought calm back to the streets of Tripoli and stopped Lebanon from further sliding into a sectarian war, writes Salam Hafez. But on the ground, there is deep resentment in the Sunni community that still threatens to boil over. 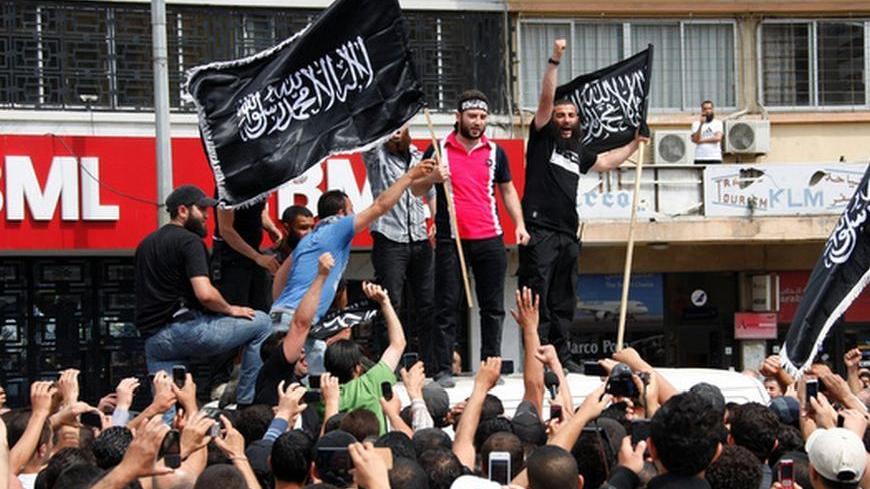 Sunni Islamist and anti-Syrian regime activist Shadi al-Mawlawi (2nd R) stands on a top of a van as he carries a flag and is welcomed by a crowd shouting slogans, gesturing and filming him in Tripoli, northern Lebanon May 22, 2012. A court on Tuesday released on bail al-Moulawi, whose arrest earlier this month set off violent clashes in northern Lebanon that killed at least eight people. The flag reads: "There is no god but Allah, Muhammad is Allah's messenger". - REUTERS/Omar Ibrahim
May 26, 2012

TRIPOLI — The release last week of Shadi al-Mawlawi, a Sunni Islamist whose arrest sparked bloody clashes, may have temporarily brought calm back to the streets of Tripoli and stopped Lebanon from further sliding toward sectarian war.

But on the ground, a deep mistrust of the security and army establishments by Sunni Lebanese, coupled with the worsening situation in Syria, and the economic and social neglect of Lebanon’s north, are challenges politicians need to address urgently or sectarian tensions will return.

There is deep resentment and frustration in the Sunni community, which has been humiliated by showdowns with Hezbollah in the past. These sectarian divisions have been brewing even more since the start of the Syrian uprising. Northern Lebanon supports the uprising, while the majority Shiite, pro-Hezbollah groups side with the Syrian regime.

In other words, although people were enraged by Mawlawi's arrest, disenchantment has been simmering for years.

Minutes after Mawlawi’s release, thousands took to the streets of Tripoli, dubbed Homs’ sister by Syrian rebels, chanting revolutionary slogans. His arrest and subsequent release have transformed him from a quiet man going about his activism into a people’s hero in a city that’s staunchly opposed to Hezbollah and Bashar al-Assad’s rule in Syria.

After a scrum to get Mawlawi out of the same office where he was arrested, he was whisked around on the shoulders of his supporters. He was raised to the pulpit where he chanted: “Oh Homs, we are with you until death… Oh Syria we are with you until death.”  Delighted, his supporters replied: “Curse your soul Hafez!” while waving Islamic and Syrian revolutionary flags.

At the same time, Sunni protestors took to the streets, staging sit-ins and demanding the release of suspected Islamists, mainly from the north of Lebanon, held without trial for over five years, even though the sentence for their crimes would be no more than three years.

That, any observer would say, would have sent alarm bells ringing through the offices of security and military establishments.

Enter the General Security Directorate, which the opposition accuses of being aligned with the March 8 Alliance, the ruling coalition composed of various political parties. It arrested Mawlawi, the locally popular, pro-Syrian opposition activist, on May 12 while he was getting a charitable donation for his sick daughter, and later accused him of belonging to a terrorist group. The Sunni community saw the arrest as a direct attack. But when two prominent and vocal Sunni clerics were shot dead on their way to a pro-Syrian rebel festival where most of the North’s clergy were gathering, their bewilderment turned to rage.

The Sunni community was already questioning the neutrality of the Lebanese Armed Forces overlooking several Syrian regime incursions into Lebanon that have left several people dead. So when the clerics, outspoken critics of the Syrian regime were killed, frustrated young men took to the streets of Akaar, Tripoli and Beirut. Roads were closed, tires burnt and sandbags placed on major roads to block them as thousands poured into the streets of Akaar and Tripoli.

In Beirut, armed men moved in and closed the office of the Arab Movement Party, a Sunni group allied with Hezbollah. The party members in the office were armed and clashes erupted, with the army now not trusted by the Sunni sect, it was powerless to stop the clashes. Three died.

Tripoli has been host to thousands of Syrians fleeing the unrest, and in the city I have met prominent activists from Syria who often sneak across the border and take medical supplies back for the wounded. In Wadi Khaled, on the border with Syria, thousands stay in Lebanese homes, schools and hospitals. Members of the Free Syrian Army often come to recuperate, restock and then re-enter.

Tripoli and the Sunni-dominated north, in general, are a staunchly anti-Assad and anti-Hezbollah bastions since the withdrawal of the Syrian regime in 2005.

The city offers the Syrian opposition support through donations, medical aid and even weapons. At the same time, the city is plagued by poverty and state neglect, which is ushering in a sweeping tide of extremism, some would say. But the actions of the security forces and army are seen here as a direct attack on the city and the Sunni sect, and a desperate attack by the Syrian regime, which is looking to ignite civil war in Lebanon in order to deflect attention from itself. The close proximity of the communities in Syria and Lebanon means that there are many families that are connected across the border.

Deadly clashes between Sunni and Alawite fighters have further exasperated the situation.

Sitting in his office in the Alawite neighborhood of Jebel Mohsin, Ali Mohammed Fodah, spokesperson for the National Democratic Party of Rifat Eid says that, geographically, it is not in their interest to spark tension with their Sunni neighbors, and fears that the city is seeing a wave of radicalization in the absence of government. Indeed, the Jebel is surrounded by Sunni neighborhoods, and there is no way out for them but they still cling to the Assad regime.

“Every minority has its fears, what builds on those fears are the decisions made by politicians… What happened, and is taking place, raises serious concerns that there are signs that some Salafis are taking an extreme position due to poor political decisions,” he said. “We have to solve this because the situation is bound to deteriorate and tensions [will] become more prevalent with our brothers [with] whom we coexist in Tripoli. The problem isn’t one group, or one sect, it’s a political crisis.” If the Syrian regime was only backed by Alawites, then it would have been long gone, he continued. “Let’s be honest here, there are plenty of minorities against the Syrian regime, but in reality, if the Syrian regime didn’t have Sunni backing inside the country then it would long have collapsed.”

He said that if the government brought in real economic and social plans for the city then it would be easy for both sides to put down their arms. “As a political party we want to see Tripoli back on the map as a hub of education and culture, sadly the city does not exist on the map of the politicians.”

From the start of the Syrian revolution, the city, and North Lebanon as a whole, has seen many pro-revolution rallies, with many roads and buildings decorated with anti-Assad slogans and revolutionary flags. Revolutionary songs blare at the Syria Taxi rank in al Tal. Some in the neighborhood of Ibeh and Abu Samra adopt extreme sectarian views at Salafi rallies attended by Dai al Islami al Shahal and other notable clerics such as Salem al Rifai and Omar Bakri Mohammed, who Salafis and organizers of the sit-in claim has no real support. But the constant theme of those rallies and speeches is that the fight will continue until one side or the other is victorious.

The Only Solution is Economic Aid

With entrenched sectarian views deepening with the crisis in Syria prolonging, only real dialog and economic aid can calm religious and sectarian fears.

Fighters in Tibeneh say the question at hand is the weapons of Hezbollah. In addition to such sectarian rivalries and allegiance to the Syrian revolution, jobs and economic opportunity is what is needed in the city.

“If they put down their artillery, then we will put down our guns,” said Abu Mazen, from the impoverished Tibeneh neighborhood, however, he indicated that if there was a real improvement in the standard of living in his community and city then the situation would be different. "We are under attack on all sides, the situation is unbearable. Assad, through his agents, is attacking us in our own country," he said.

Mohammed Maly Abubakr, a protester and sit-in organizer from Massjid Amera, has been in Karameh square for over 20 days, although the sit-in has ended and the tents dismantled following the release of Mawlawi, one tent will be left erected as a symbolic gesture until all those held without trial are released.

“We don’t have a leader or a political group, we are just young men who have had enough of this unjust treatment and came here with nothing but to have our voices heard,” said Abubakr whose 20-day stint has cost him $2,000 — the cost of tents, food and banners. “There is no reason for anyone to be afraid of us, we are not takfiris and we, even before the latest events, live side-by-side with Christians, there is even a church that is allowed to ring its bells in our neighborhood,” he told me, vowing to keep the case at the forefront until all those arrested have been released and those responsible for the killing of the sheikh in Akaar are brought to justice.

The release of Mawlawi is a precious step towards saving Lebanon from conflict. But a large portion of the Lebanese population is losing faith in the security and military establishment. And as the economic climate continues to take its toll on the communities and divided political leaders are unable to halt the rut while the situation in Syria worsens, the only way to approach Lebanon is by drawing a blank sheet and starting again, otherwise expect more of the same.

Salam Hafez is a Middle East based journalist. He has previously worked as an Iraq editor at the Institute for War and Peace Reporting, Al Jazeera English, The National and Centre for Social Cohesion. More recently he has reported from inside the Syrian uprising as a freelance correspondent.