Israel's Netanyahu Warns of Iran Threat, Eases Up on US

Israeli Prime Minister Benjamin Netanyahu toned down his ultimatums to President Barack Obama Thursday and focused on Iran, displaying a crude drawing of a bomb to dramatize his concerns about Iran’s growing stockpile of enriched uranium. 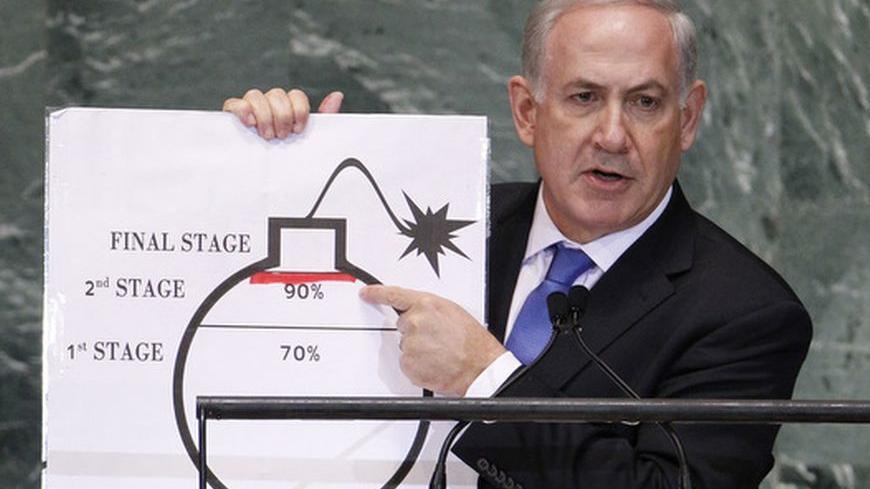 Israel's Prime Minister Benjamin Netanyahu points to a red line he has drawn on the graphic of a bomb as he addresses the 67th United Nations General Assembly at the U.N. Headquarters in New York, September 27, 2012. - REUTERS/Lucas Jackson

Israeli Prime Minister Benjamin Netanyahu toned down his ultimatums to President Barack Obama Thursday and focused on Iran, displaying a crude drawing of a bomb to dramatize his concerns about Iran’s growing stockpile of enriched uranium.

“So how much enriched uranium do you need for a bomb, and how close is Iran to getting it?” Netanyahu told the United Nations General Assembly Thursday, pulling out a Road Runner-esque drawing of a round bomb with a fuse. “This is a bomb. … In the case of Iran’s nuclear plans to build a bomb, this bomb has to be filled with enough enriched uranium.”

Iran is “70% of the way there,” the MIT-educated Israeli leader continued. “And by next spring, at most by next summer at current enrichment rates, they will have finished the medium enrichment and move on to the final stage. From there, it’s only a few months, possibly a few weeks before they get enough enriched uranium for the first bomb.”

Still, that timetable seemed to allow for several more months to pursue international diplomatic efforts to try to persuade Iran to curb its nuclear program before Israel would feel compelled to resort to force. And Netanyahu Thursday expressed new confidence that the Israeli and American administrations would be able to reconcile their different timetables on how long there is to deal with Iran’s nuclear program.

“Israel is in discussions with the United States over this issue, and I am confident that we can chart a path forward together,” Netanyahu told the world body.

“The two sides, the Israelis and the Americans, are trying very hard to narrow differences between the two of them,” Patrick Clawson, an Iran analyst at the Washington Institute for Near East Policy, told Al-Monitor. The Israelis “feel comfortable that they are succeeding.”

As to what accounts for Netanyahu having toned down his camp’s recent rhetoric about the urgency of the Iran threat, analysts cited several factors. Key among them, the Israelis reading US polls showing the growing likelihood that Obama will win a second four-year term as US president.

“All of the above, plus, the Israelis realize that fighting with the Americans is only to the Iranians’ benefit,” Clawson said. “That’s a big part of the dynamic.”

Netanyahu’s UN speech “took the Obama dimension out of it,” David Makovsky, an Israel analyst at the Washington Institute for Near East Policy, told Al-Monitor in an interview Thursday. “He put the focus where it should be: on Iran’s program and not on President Obama and I thought it was artful. He was able to sharpen the focus on the red line without sharpening focus on the United States.”

Netanyahu “said for the first time – he made some news, which got buried-that they are now in talks  with the United States on this issue, which was accurate,” said Makovsky, who recently co-wrote, with Clawson, a paper on bridging the US-Israeli gap to prevent Iran nuclear breakout.

Regarding Netanyahu’s bomb diagram, “his point is, once you get a full bomb’s worth of 20% enriched uranium, then it is an easy dash to weapons grade—4 weeks or six weeks or [a few months],” Makovsky continued. “He has now toned it down, saying Israel is now in talks with the US over this. And he’s trying to educate the public, what is 20% enriched uranium and why that is 90% of the way” to enriching to weapons grade.

Netanyahu meets with Secretary of State Hillary Clinton Thursday evening. He will also speak by phone with President Obama on Friday, the White House said Thursday.

“I expect the president will have a follow-up phone call with the prime minister probably Friday,” White House Press Secretary Jay Carney told reporters, the Wall Street Journal reported, noting that it was “a rare instance of the White House previewing” an Obama call with a foreign leader.
Clinton also met on Iran Thursday with European Union foreign policy chief Catherine Ashton and foreign ministers from the P5+1 group negotiating with Iran over its nuclear program–the United Kingdom, France, Germany, China, and Russia.