While opposition to Israel is hardly new, the current campaign among Western civil society groups and on college campuses dates to the collapse of Israeli-Palestinian peace talks in 2000 and the second intifada. Barbara Slavin on the rise of the Boycott, Sanctions and Divestment (BDS) movement. 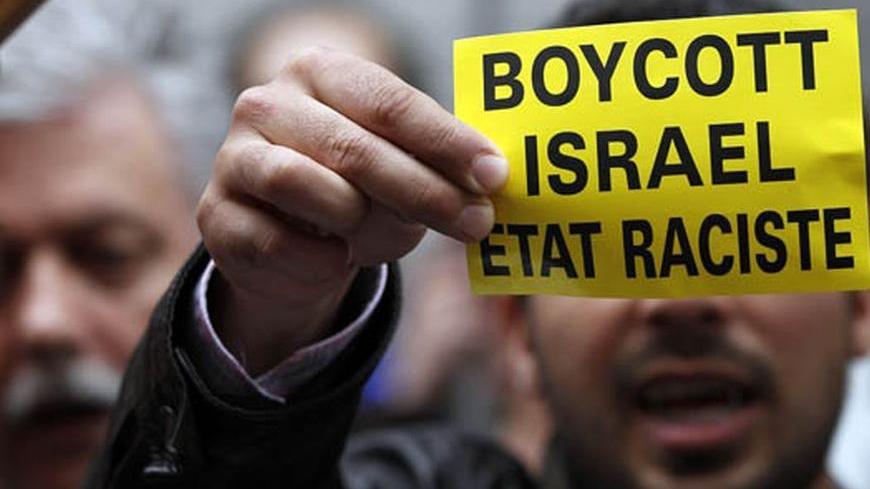 A demonstrator displays a sign reading "Boycott Israel, racist state" outside the Belgian foreign affairs building during a protest in Brussels May 31, 2010. - REUTERS/Francois Lenoir

As he consolidates his power with a new coalition, incumbent Prime Minister Benjamin Netanyahu is likely to continue his unremitting focus on Iran as an existential threat.

However, a bigger challenge to Israel over the long run may be the international campaign to deny the country’s status as a Jewish-governed polity that rules a growing and disenfranchised Palestinian population in the West Bank.

In a major foreign policy address last month, Vice President Joe Biden noted that “President Obama has stood up to what is I think the gravest threat to Israel, the effort of the rest of the world to delegitimize it as a state.”

Biden went on to mention the Obama administration’s blunting of Palestinian efforts to challenge Israel at the United Nations.

While opposition to Israel is hardly new, the current campaign among Western civil society groups and on college campuses dates to the collapse of Israeli-Palestinian peace talks in 2000 and the second intifada.

It gathered momentum following Israel’s 2008-09 “Cast Lead” assault on Gaza, which killed more than a thousand Palestinians — most of them civilians. Other milestones include the Goldstone report, which criticized both Israel and Hamas for committing war crimes, the 2010 flotilla and the rise of the Boycott, Sanctions and Divestment (BDS) movement.

Eran Shayshon, director of National Security and Global Affairs at the Reut Institute, a nonprofit research organization based in Tel Aviv, told Al-Monitor that while 2010 was a banner year for the campaign, 2011 was “the year we turned the table on the BDS movement.”

He acknowledged, however, that challenges are likely to grow as a result of the political transformations sweeping the Arab world and bringing Islamicist organizations into power.

The campaign reached a high point after the flotilla incident of May 31, 2010, when Israeli commandos landed on a Turkish ship, the Mavi Marmara, which was trying to break the Israeli blockade of Gaza. When some on the vessel resisted, the Israelis opened fire, killing eight Turks and one Turkish-American, while wounding activists from dozens of nations.

However, efforts to duplicate the protest in 2011 fizzled. Greece blocked most of a second flotilla last summer while a “flytilla” to Israel’s Ben Gurion airport was also squelched.

A report by the Reut Institute lists other Israeli victories against the BDS effort, including the amendment of a British law authorizing warrants against Israelis suspected of war crimes and a UN report that justified Israel’s handling of the Turkish flotilla.

Shayshon said that Israel had prioritized the pushback and fostered a network of groups and activists around the world to challenge the BDS campaign. However, he said that the movement remains a strategic threat and has been effective as a “branding mechanism” that has captured “an anti-Israeli spirit of the times.”

He distinguished between those who support Israel but criticize its policies and those who seek its elimination as a Jewish state.

The first group he called “the Beinarts” after Peter Beinart, author of a new book that criticizes Israel’s continued occupation of the West Bank and expansion of settlements there. Beinart advocates a boycott of products from the settlements, not from Israel as a whole

The second group, Shayshon said, stems from a “red-green alliance” of radical leftists and Islamic activists with a broader anti-West agenda. Within that agenda, he said, “only their ideas about Israel have gained weight.”

Israel benefited last year from the diversion of media attention to the uprisings in Arab countries. But with the political gains of Muslim Brotherhood groups in countries such as Egypt, Tunisia and Libya (and potentially Syria), “there could be a serious boost” to the campaign, Shayshon said.

He also predicted that the next Egyptian government would maintain the peace treaty with Israel but that the peace would be tactical rather than strategic and the relationship would deteriorate.

The changing regional political dynamics has convinced other Israel supporters to focus less on the Iranian nuclear program and more on Israel’s back yard.

Such concerns are also being heard within the US Jewish establishment.

Malcolm Hoenlein, Executive Vice Chairman of the Conference of Presidents of Major American Jewish Organizations, expressed unease about the changes in countries such as Egypt where he said the choices in upcoming presidential elections are between “bad and worse.”

He said he still worries about Iran but when asked to describe the biggest challenge to Israel, replied: “I see the most immediate threat [to Israel] to be Iran and other developments in the region.”

As for the BDS campaign, Hoenlein asserted that Israeli settlements were “an excuse” for efforts to delegitimize Israel which he said predated the 1967 war. The campaign “is annoying and unjustified… not significant but could be eventually,” he said.

The current vacuum in Arab-Israel peace talks is feeding the movement as is Israel’s continued settlement expansion and treatment of Palestinians.

“There is a price to pay internationally” for Israeli actions toward the Palestinians, says Ori Nir, a former Israeli journalist who is now a spokesman for Americans for Peace Now.