Israel reacts to the Palestinian Authority's winning of observer non-member state status at the United Nations with real-world crackdowns: withholding payment of tax revenues to the Authority and moving forward on settlement plans for the sensitive E1 zone. 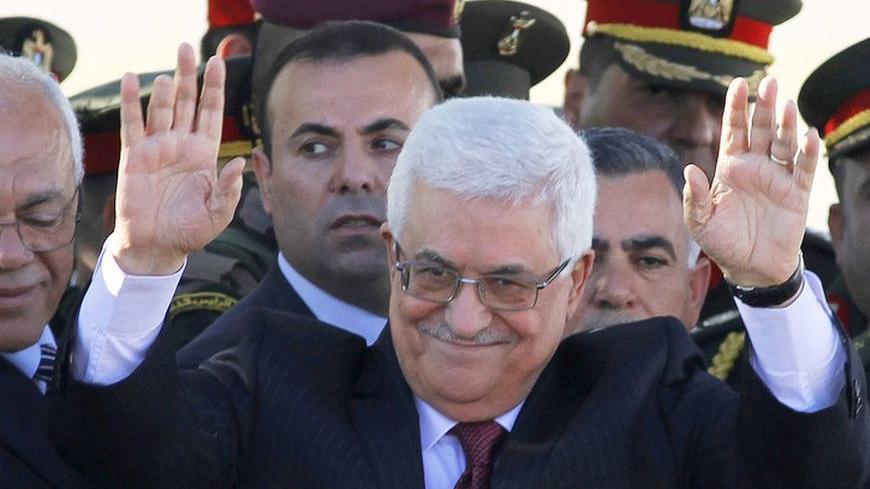 Palestinian President Mahmoud Abbas (C) waves to the crowd during a rally marking the UN General Assembly's upgrading of the Palestinians' status from "observer entity" to "non-member state", in the West Bank city of Ramallah, Dec. 2, 2012. - REUTERS/Mohamad Torokman

As Israel announced that it was withholding tax payments to the Palestinian Authority on Sunday, an Israeli official told Al-Monitor that Israel considers its 2009 understanding with the Americans that it would not build in the sensitive E1 zone of East Jerusalem “no longer relevant.”

“The Palestinians want to use the peace process in order to bring about the end of the state of Israel,” Israeli Prime Minister Benjamin Netanyahu charged on Sunday, as the Israeli government said it was withholding some $100 million in tax funds to the Palestinian entity. Palestinian Authority President Mahmoud Abbas returned home to a hero’s welcome in Ramallah Sunday, following his successful bid to get the United Nations to vote to grant the Palestinian Authority upgraded status in the world body last week.

Angered by the United Nations vote, Israel on Friday announced that it was building 3,000 new settlement homes in East Jerusalem and the West Bank, and allowing zoning and building planning to go forward in the E1 zone, that if pursued would effectively divide the West Bank.

“I understand there was some agreement with the Americans in 2009 … at the start of this government’s term of office not to build in E1,” the Israeli official, speaking not for attribution, told Al-Monitor on Sunday by email. “That commitment has been kept in full.”

“Now we have two new factors making it no longer a relevant understanding,” he continued. First, “new elections in a few weeks [that] will bring a new government, … and [secondly, the Palestinian Authority’s] fundamental violation of all prior agreements and re-writing of the rules.”

There is “no place for criticism (or even surprise) by [the] Americans,” he added. The “agreement [was] kept in full, for four long years.”

US officials did not immediately respond to requests for comment from Al-Monitor on  Sunday.

But two former senior US officials told Al-Monitor that the Israelis full well know that building in E1 would cross an American red line, for both Republican and Democratic administrations.

“Building in E-1 has been a red-line for the United States, and for a reason — it would lead to the bifurcation of the West Bank and render territorial contiguity there nearly impossible,” former senior State Department official Robert Danin told Al-Monitor on Sunday, noting that he spent more than 20 years working Middle East issues for the State Department under both Republican and Democratic administrations. “I don’t see any administration acquiescing to building there.”

“If the announcement is real and not simply a PR move for internal politics reasons, it should spur the administration into action, as the United States has been adamant for many years, including in the Bush Administration, that Israel not build in E1,” former US Ambassador to Israel Daniel C. Kurtzer told Al-Monitor on Friday.

Secretary of State Hillary Clinton, speaking to a forum of American and Israeli Middle East officials and experts on Friday, warned that regional trends may not favor Israel’s leverage in reaching peace agreements with the Palestinians and its Arab neighbors in the future to bolster its security.

“I just personally believe that it’s going to be difficult if you think about what could be facing Israel in three to five years — either a failed state or all or part of Syria under control of extremists; instability in Jordan, … continuing political instability in Lebanon with the growing power of Hezbollah; Hamas basically becoming a proxy of Iran; and Sinai becoming a danger to Egypt as well as to Israel,” Clinton told the Saban Forum on Friday. “Where does one look to try to get some benefit in that equation?”

Laura Rozen reports on foreign policy from Washington, D.C. She has written for Yahoo! News, Politico and Foreign Policy. She tweets on @LRozen.