While Tehran is actually becoming slightly more livable, pessimism reigns, Barbara Slavin reports for Al-Monitor. What's most striking is the growing feeling that life will not get better anytime soon. "We may as well enjoy life because who knows what will happen tomorrow?” was the way one Tehrani put it. 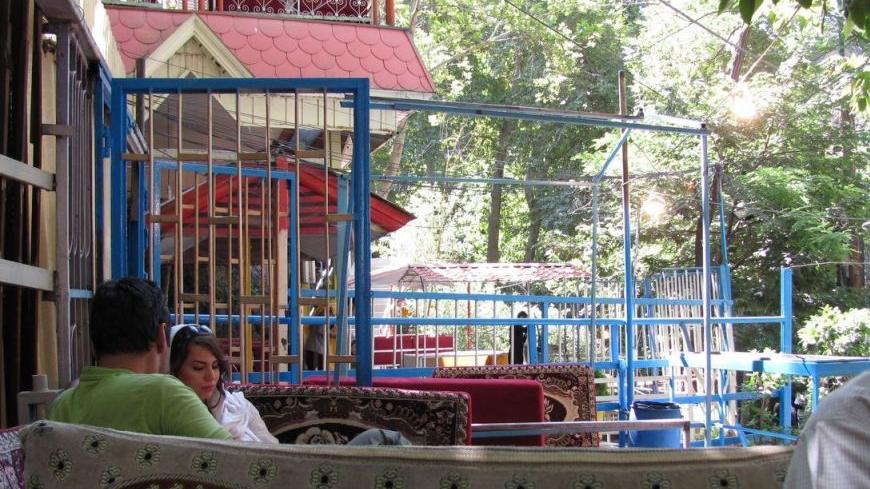 A couple relaxes at a tea house in the Darband neighborhood of Tehran, Aug. 29, 2012. - AL-MONITOR/Barbara Slavin

TEHRAN — Cool breezes wafted through the trees and water gushed down the mountainside as young Iranians sipped tea and leaned against cushions on raised wooden platforms known as a takht-e choobi.

Taking advantage of an unexpected three-day holiday provided by the government last week to reduce traffic and improve security for a summit of Non-aligned nations, Tehranis flocked to the city's Darband neighborhood, one of several popular places in the foothills of the Alborz mountains that cradle the Iranian capital from the north. Such mountain retreats provide an inexpensive escape from the summer heat and pollution — as well as from the social restrictions of the Islamic Republic that  forbid unrelated men and women from spending un-chaperoned time together.

These days, Iranians need such diversions more than ever.

Sanctions and economic mismanagement have cut the value of the local currency, the rial, compared to the dollar, so that the average monthly salary is worth only $500 compared to $1,000 a year ago. That makes it hard to pay rent of $100 or more for a tiny apartment, to buy chicken that costs $2 a pound, tomatoes that go for 50 cents a pound or gasoline at 35 cents a liter.

Israeli threats to attack Iran’s nuclear installations are also weighing on Iranian minds — even if officials such as parliamentary Speaker Ali Larijani dismiss the notion of such an attack as “suicidal” for Israel. For an American returning to Tehran after four years, what is most striking, however, is the growing feeling that life will not get better anytime soon. Iran seems to have become a nation of Scarlet O’Hara’s who live for today and try not to think about the future.

“We may as well enjoy life because who knows what will happen tomorrow?” was the way one Tehrani put it. The speaker, like others interviewed by Al-Monitor last week, is not being named to minimize chances for government retribution.

This pessimism contrasts with sentiment in the 1990s and early 2000s that Iran could overcome its post-Islamic Revolution difficulties. Iranians who left the country before the 1979 overthrow of the secular shah or during the 1980-88 Iran-Iraq war began returning in the '90s to reclaim property, see relatives and start businesses. Adult children of diaspora Iranians came back to work for foreign companies eager to buy Iranian oil and sell manufactured goods to a growing middle class.

Under the presidency of Mahmoud Ahmadinejad, however, the direction of the flow has reversed. Now even blue-collar workers — many of them laid off by employers who can no longer import materials from European companies spooked by American sanctions — are contemplating getting out.

“This country is broken,” said a parent of one such worker inquiring about how to get a US or Canadian visa.

Ironically, this dearth of optimism comes at a time when Tehran — a megalopolis of more than 12 million people — is actually becoming slightly more livable. The capital’s infrastructure is much improved under Mayor Mohammad Baqer Qalibaf, with impressive new tunnels, bridges and highways flanked by greenery. While less affluent Iranians go to the mountains or picnic on the grounds at Niavaran, site of the palaces of former shahs, upper-income Iranians fill restaurants that offer traditional cuisine and spirited performances by male singers and musicians. The food here remains phenomenal, from subtly spiced stews to elaborate rice dishes and locally grown fruit. Succulent Iranian honeydew melons melt in the mouth and make their American counterparts taste like cardboard in comparison.

Continuing a trend that began more than a decade ago, Iranian women are further stretching the definition of Islamic dress. Bright headscarves, short tunics and snazzy sandals once largely confined to denizens of the wealthier and more Westernized districts of Tehran are now found on women throughout the city. Men, too, are becoming more colorful, no longer sticking to a uniform of white un-collared shirts and black pants.

While clearly not satisfied with their own government’s performance, Iranians remain a proud people who bristle at the negative stereotypes about them so often propagated in the West.

“Osama bin Laden in the airport with a shotgun,” was the way one carpet seller described what be believed to be the average American’s view of Iranians.

With thousands of years of Persian history and culture behind them, Iranians vehemently reject comparisons with any Arabs — particularly the late Saudi-born al-Qaeda leader. Government officials, meanwhile, like to stress that Iranians have also been the victims of terrorism from groups such as the Mujaheddin-e Khalq — a cultist Iranian opposition organization that has been lobbying to get off a US State Department terrorism list.

Some ordinary Iranians also defend their country’s nuclear program — despite the heavy price society has paid in terms of sanctions. Indeed, they say that their government should not give up the nuclear program easily after incurring so much punishment to acquire it. Yet, virtually everyone acknowledges that the pain of sanctions is increasing. After recent earthquakes, some European pharmaceutical companies that wanted to send medicine to affected areas were “afraid to do so because they couldn’t get OFAC licenses,” said a diplomat here, referring to the US Treasury Department’s Office of Foreign Assets Control. (American reporters traveling to Iran now also need such licenses to pay translators and rent cellphones.)

Although US neoconservatives assert that economic pressure will make Iranians rise up against their government, the mood here is one of resignation rather than revolution. Some Iranians assert wishfully that change will come once the Iran-backed regime of Syrian President Bashar al-Assad falls. But it is hard to find anyone willing to risk his or her life for an uncertain political future — especially after the government crushed pro-democracy protests following disputed 2009 presidential elections.

New elections are scheduled next year but few Iranians think they will bring any positive change, even though many are glad to see the back of Ahmadinejad. Iranians also seem largely uninterested in the US election — a contrast to four years ago when many closely followed the Democratic primary contest between Barack Obama and Hillary Clinton.

Parliament speaker Larijani told Al-Monitor that it didn’t matter whether Obama is re-elected or Mitt Romney takes his place. “I don’t think people and personalities make so much difference,” Larijani said, “because there are systems and the systems think and work according to their own national interest.”

Others, however, said they prefer Obama.

“Romney is really nasty,” said one young Iranian on the sidelines of the Non-Aligned conference. “We are afraid he would attack Iran. We like Obama because he cares about his own people.”

Outside the conference hall, where Iranian reporters seemed to spend much of their time trying to interview the handful of Western journalists covering the meeting, residents of the capital were less eager to engage with foreigners than in the past. Contact with outsiders is now potentially much more dangerous — a legacy of the 2009 crackdown, which brought the arrest of hundreds of former Iranian officials, journalists and academics who had close ties with the West.

At Darband, for example, a young man who had given permission for a photo to be taken of him and his wife and young son sitting on a takht-e choobi, changed his mind 20 minutes later and asked that the image be deleted. Why, he would not say.

Still, Iranians manage to maneuver within the strictures of their society with a fluidity matched by their creative driving skills. “We have freedom here, you just have to find it,” asserted a waiter at a Tehran restaurant. “Every society has its own forms of control … but we always find a way around the restrictions they impose on us.”

Barbara Slavin is Washington correspondent for Al-Monitor and a senior fellow at the Atlantic Council, where she focuses on Iran. She returned Saturday (Sept. 1) from her eighth trip to Iran since 1996. She tweets @BarbaraSlavin1.