Return of Hamas to West Bank Certain to Be Uphill Battle

Though the first Hamas demonstration in years in the West Bank drew thousands, there is no sign that public support for Hamas is growing there, writes Daoud Kuttab. 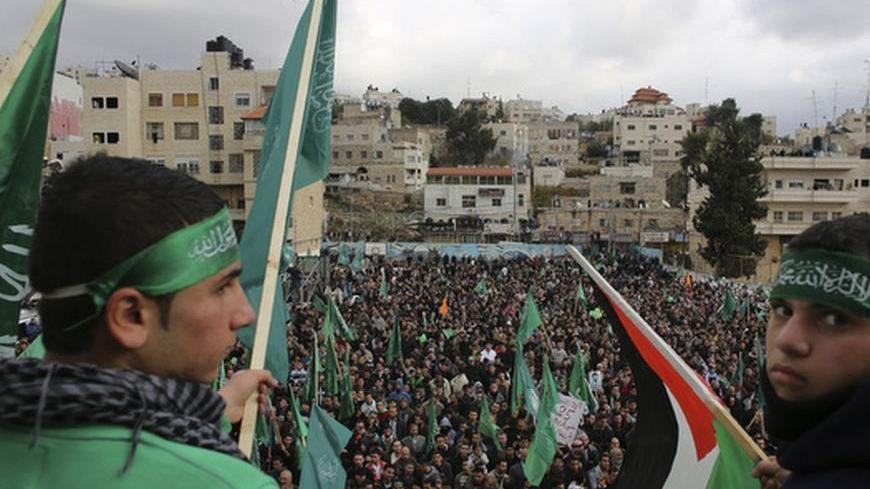 Hamas supporters wave flags during a rally in the West Bank city of Hebron, marking the 25th anniversary of the founding of the Islamist militant group, December 14, 2012. - REUTERS/Ammar Awad

Like most journalists, Mohammad Abu Arqoub loves to chat with taxi drivers to gauge the public mood. In the trip from the center of town to his house in the Raffidya neighborhood, Arqoub, who is also a lecturer at the Al Quds University in Ramallah, wanted to know what people in Nablus where thinking on the occasion of Hamas' 25th anniversary. Hamas had just concluded a public demonstration that thousands of its supporters attended.

The taxi driver paid no attention to his question, instead wanting to know if his passenger was a teacher — he was giving teachers a free ride as an act of solidarity with public servants who have not been paid in months by the Palestinian Authority.

Warring Palestinian factions are experiencing an unprecedented rapprochement after five years of bitter conflict that has seen the Gaza-based authorities arresting supporters of Fatah and banning them from any public activities while the Ramallah-based Palestinian Authority bans activities of Hamas and detains some of their militant members. The most recent Israeli mini-war against Gaza has united Palestinians and has brought on genuine warming between the two groups. Last week, PLO leaders participated in Hamas celebrations in Gaza while both parties released their opponent’s political prisoners.

The big question on the minds of everyone, including the Israelis, was whether the warming of the PA to Hamas would be reflected in a major spike in public sentiment for the Islamic movement in the West Bank. The short answer to the question is no.

While events taking place in Nablus and Hebron drew thousands, and smaller numbers showed up in Ramallah, there is no sign of a strong shift in public support for Hamas in the West Bank. Other than the bump in public-opinion polls that you would expect after a military confrontation, there was little evidence suggesting that we will witness anything like the strong showing that Hamas produced in the 2006 elections.

A public-opinion poll conducted by Arab World For Research and Development on Dec. 1-2, nine days after the cease-fire in Gaza, showed the Palestinian public for the first time as favoring Prime Minister of the Hamas government Ismael Haniyeh, who gained 39% favorable votes to 36% for the PA’s Salam Fayyad. Palestinian president Mahmoud Abbas scored a very high 63% approval rating due to strong public sentiment for the Palestinian leader’s bid for Palestinian statehood at the UN.

The future of Hamas in the West Bank will not depend on improving polling numbers. It is unclear whether the Islamic Resistance Movement will be permitted to work publicly in the West Bank. In the past five years, non-governmental organizations affiliated with Hamas have either been closed or forced to limit their public activities in the West Bank.

Perhaps the best sign of the weakness of Hamas in the West Bank was the fact that in the three public celebrations of the Hamas anniversary, much was said about the Sajeel Victory rather than hunger-striking Hamas prisoners Ayman Sharawna and Samer Issawi.

And unlike the fiery speeched by Khaled Meshaal and Ismael Haniyeh, monitors of the public speeches made in the West Bank noticed less rehetoric and more pragmatic language in areas that are still within easy reach of the Israeli occupation authorities.

It will be some time before one can gauge the strength of Hamas in the aftermath of their limited newfound freedom in the West Bank. Parliamentary and presidential elections, which are overdue, are scheduled to take place once the various agreed-upon reconciliation steps are implemented. The last time around, things got stuck when Hamas in Gaza stopped the Central Election Committee from registering voters.

For the most part, anyone trying to measure how the general public views the return of a more public Hamas in the West Bank will find an apathetic Palestinian public attitude, much like that of the Nablus taxi driver.

For the time being, there is more interest in the day-to-day economic well being of average Palestinians than the percentage of support of this or that political faction.