Iran's Supreme Leader Ayatollah Ali Khamenei has yet to acknowledge the extent of Iran’s economic troubles, which could undermine the stability of the country and its theocratic regime, Shahir Shahidsaless reports. 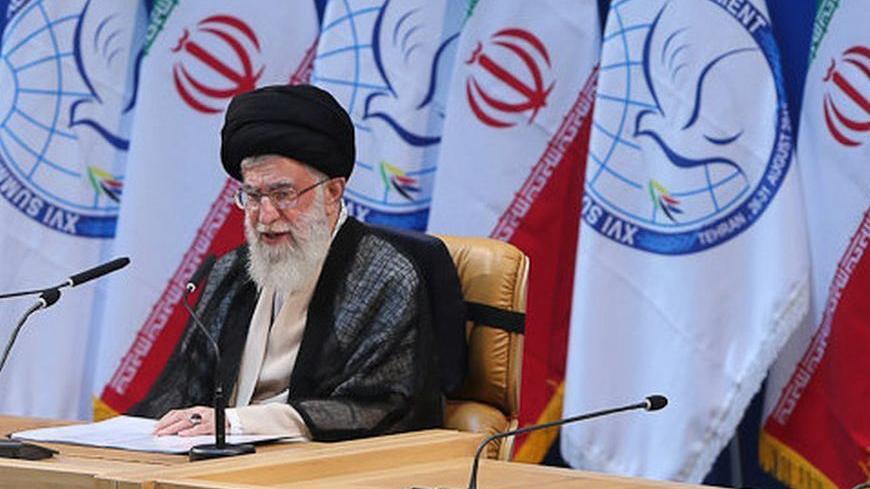 In public, Supreme Leader Ayatollah Ali Khamenei has not acknowledged the full nature and magnitude of Iran’s current economic predicament which could undermine the stability of the country and its theocratic regime.

In a recent visit to cities in the northeastern province of North Khorasan, Khamenei, referring to the sharp devaluation of the national currency, the rial, reiterated, “They [enemies] express their joy in a childish way and say that they have managed to create problems for the Iranian nation and the Islamic Republic. … Is our situation worse than yours?”

Further downplaying the current unstable economic situation in Iran, he added, “Your problem is far more complicated than our problem. Your economies have reached a dead end. … The American people are helpless.”

Khamenei has repeatedly praised the “resolve” and “widespread enthusiasm, and exhilaration in Iran’s society.” Increasingly, however, not everyone within the Iranian political and religious circles agrees with that upbeat analysis. Three grand ayatollahs who had been avid supporters of the regime — Makarem Shirazi, Safi Golpayegani, and Shobeiri Zanjani — came together and collectively warned the government in an open letter Oct. 12 posted on their websites:

“Those people who are believers [in Islam and the Islamic regime] … repeatedly come to us and complain about the economic difficulties, particularly extreme and intolerable rising prices that have targeted the lower class (mostazafin),” the letter said.

Earlier (Sept. 20), Makarem said, “There is a limit to what the people can put up with.”

Khamenei’s observations are not just a willful display of ignorance on his part or an effort to scapegoat outsiders for Iran’s difficulties. Central to the contrasting visions is the fact that the grand ayatollahs are accessible to ordinary Iranians while Khamenei’s contacts are filtered through a small group working at the beit-e-rahbari (House of the Leader).

This lack of contact may account for Khamenei’s efforts to compare recent protests over the sudden plunge in the rial to mass upheavals following disputed 2009 presidential elections. In a fiery speech on Oct. 10 in Bojnourd, a city in North Khorasan, Khamenei praised the “vigilance” of the people and their “ability to take action at the right time” to confront what he called “the enemy’s conspiracy” and prevent a repeat of 2009.

While Khamenei fails to differentiate between the forces that came together in the Green Movement and those involved in current economic protests, the Grand Ayatollahs recognize that a different social class — Iran’s poor and lower middle class — is now involved.

The Green Movement was a loose coalition of reformers, conservative pragmatists, moderate conservatives, and liberals whose demands varied from limiting the authority of the Supreme Leader to eliminating the institution of the velayat-e faqih altogether. The movement included intellectuals, writers, artists, and academics but its backbone was comprised of young middle and upper class urbanites, which explains why the focus was on civil and political rights rather than the economy. Thus the clashes with the authorities were a manifestation and a revival of what the Iranian philosopher Ramin Jahanbegloo describes as a continuous tension between tradition and modernity. This is a 100-year-old battle within Iranian society that dates back to Iran’s Constitutional Revolution of 1905-1907.

Supporters of the Green Movement under certain circumstances may be prepared to return to civil resistance but will not engage in violent physical confrontations.  Happy to post on Facebook, members of this societal group are generally not prepared to risk their lives.

Now, as the economy continues to decline, the spike in the price of basic goods may bring a different type of social forces to the streets. This time, simmering restlessness spurred by rampant inflation could transform into unrest driven by the poor, prepared to fight for their survival. This is the grand ayatollahs’ concern. These forces could produce what the popular Iranian website, Baztab-e Emrooz, calls, “the movement of the hungry.”

Khamenei’s dismissal of the current economic situation may reflect his poor understanding of the scale and nature of the problem, as well as the characteristics of a new movement that appears likely to emerge. This lack of understanding has resulted in overconfidence, a refusal to change and a fierce protection of the status quo.

Voices of dissatisfaction with the management of President Mahmoud Ahmadinejad and his lack of cooperation with different political factions are getting louder and clearer. A Khamenei nod could set the stage for Ahmadinejad’s impeachment by the parliament and his removal. However, when the parliament was mulling whether to question Ahmadinejad and impeach two of his ministers in mid-October, Khamenei called for calm, and praised Ahmadinejad’s administration as having been “able to accomplish many great tasks, construct major infrastructure works.”

In a news conference following these comments, Ahmadinejad's deputy, Lotfollah Forouzandeh, said, “Based on the Leader of the Revolution’s guidance ... questioning of Ahmadinejad [by the parliament] and the impeachment of two ministers are off."

As sanctions further constrict Iranian economic activity and life becomes more arduous for the Iranian people, especially the poor, there will almost certainly be an outbreak of public anger by a new class that has not arisen since the 1979 revolution. Unless Khamenei comes to terms with reality, this new "movement of the hungry" could endanger the stability of Iran and its regime.

Shahir Shahidsaless is a political analyst and freelance journalist, writing primarily about Iranian domestic and foreign affairs. He lives in Canada.