Women Should Be Full Partners In Arab Spring, US Envoy Says

Women played a central role in overthrowing dictatorships during the Arab Spring but are also prime targets of radical Islamists attempting to hijack the movement, said Melanne Verveer, US envoy for global women's issues. She spoke to Al-Monitor's Sophie Claudet on the sidelines of the Women's Forum in Deauville, France. 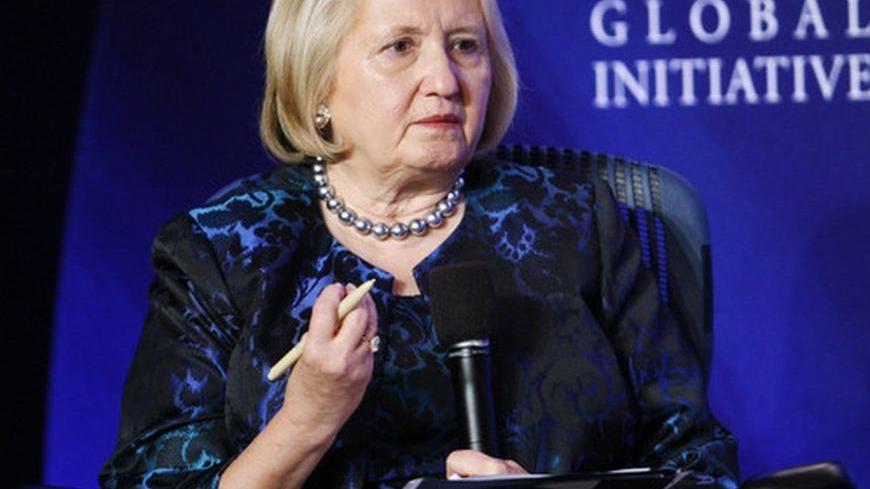 DEAUVILLE — The lack of women’s economic and political participation, and lack of women's education, kept Arab countries from developing properly, said US Ambassador-at-Large for Global Women's Issues Melanne Verveer on the sidelines of the Women’s Forum in Deauville, France. Then came the Arab Spring and “women were shoulder-to-shoulder with men in the revolutions.”

“Women were able to bring their talents and their experiences to decision-making in their countries,” said Verveer, who has held her position since April 2009. Ensuring that they continue to do so is of utmost importance and “will say a lot about the future of those countries both economically as well as in terms of democratic governance and the better future for the people,” she said, adding that both the Middle East and North Africa (MENA) and women from that region are “a great focus” for her Office of Global Women’s issues.

But she warned against radical Islamist elements that are trying to hijack the Arab Spring: “Those who only have violence and violent means to achieve their goals, I think that has to be dealt with for what it is: criminal acts … Extremism and democracy don’t go hand in hand.” She said women were too often the prime targets of radical Islamists: “Women are absolute, consistent practitioners of the faith and they are angry, they are suffering from the gross misinterpretation, the hijacking from those who abuse their religion to serve their horrible ends, whether it’d be not sending girls to school or justifying violence against women and oppression … That is not religion.”

With this in mind, Verveer strongly emphasized the need to distinguish between radical Islam and Islam as a faith. “There is no contradiction between Islam as one of the world’s great religions, as the values that it espouses, and democracy.” She said women were in the vanguard of combating extremism: “What women have told me, what they ask is, how can they as Muslim women take back their religion?”

“We are in still in the spring, though sometimes the spring looks like autumn, but I hope we don’t have a winter of discontent,” she added.

Verveer condemned the bloody attack on the US consulate in Libya during which ambassador Christopher Stevens was killed as well as the attack on the US embassy in Tunis, but she said they should not preclude her government from continuing to assist these countries politically and economically. “The horror of it cannot be understated, but one can only hope, pray and work to support efforts in the coming months for these countries to be able to let the voices of the people who brought the revolution speak more loudly, take over the decision-making.”

“Those attacks were not representative of the people,” she added. Visibly moved, she said that she knew Stevens and that, days before his death, she had met with a group of Libyan women: “They said to me please tell him what he means to us, he was so open to the women in Libya, he knew how critical they were to the country’s future.”

“It is a very conservative society but in the context of this society they were taking their place,” Verveer said.

When asked which post-revolutionary countries she was most hopeful about, she said she wanted “to be hopeful about all them,” though she singled Tunisia as “heading in the right direction” as she recalled the country’s historical achievement in bringing about equality between men and women as far back as 1956, which she said was not being challenged by the Islamist-dominated government. The picture in Egypt she assessed as “more complicated,” as women who actively participated in the revolution were being pushed back and grossly under-represented in both parliament and the government. Egypt’s ongoing battle over ending child marriage and female genital mutilation could be challenged again. Libya, which she is also closely watching, needs to get good governance in place but she said: “They are not going to be able to do that with all the munitions, the lack of critical leaders in key positions … I do know so many Libyan women, I hope for them that they will fulfill their aspirations.”

“These are all evolutionary situations that are going forward,” she said of post-revolution Arab countries – Yemen included.

Her Office of Global Women’s issues has focused on both governance support and economic development in the MENA region, while making sure stakeholders are always in the driver’s seat. She stressed the need for supporting women in small and medium-sized enterprises “because they are so much a part of the economic growth.” We have “a strong commitment on the women’s entrepreneurship front for training and loan guarantees, as access to capital is a huge issue.” She said Arab Spring countries could not fail economically because “so much of what the revolutions were about was the economy.” Her office also supports women running for elections, as she firmly believes in keeping the political process as open and participative as possible.

Verveer is also monitoring the situation in other MENA countries. She particularly commended Morocco for its new constitution (in 2011) and its new family law or Mudawana (in 2004). “Women there have been an example for the region with what they were able to do with the Mudawana reform ... They have equality for their women chiseled in their constitution.” But Verveer, who regularly travels to the region, said Moroccan women now worry about what the future holds.

She noted Syrian women’s active role in the revolution against President Bashar Al-Assad, regretting their marginalization now that the country has dived into an all-armed conflict. In countries with which the United States has no diplomatic relations, be it Syria, Iran or North Mali, Verveer said she and the US State Department —where her office is housed — were working diplomatic channels or relying on other countries to help. She deplored the fact that Iranian women had been barred from 77 disciplines in several universities last summer, describing the move as a “terrible setback.” About the sanctions slapped on Iran by Western countries, she acknowledged that they had the “unintended effect” of harming the civilian population, among them women, but that they were justified “to stop Iran from developing potential nuclear warfare.”

About Mali, whose northern region is now in the hands of extremist Islamists, she said it was all the more deplorable that it “was a model developing country, what is happening in the last few months is discouraging beyond description, what is happening particularly with the Islamist groups [that are] actively engaged in ways that are so extreme against women.” North Mali is “very much on our radar screen. It is another one of these really tough situations where you wish there were some better avenue to bring about a change from what is occurring.”

Verveer is also watching Israel, which was slammed by the State Department last year for not doing enough to combat human trafficking and described as a destination country for men and women subjected to forced labor and sex trafficking. She said the country was progressing and had now passed a law to combat trafficking. “Every country is working to make progress including the US but it is a very, very serious issue everywhere. Yes Israel is progressing.”

Last but not least, she expressed strong hope that her Office of Global Women’s Issues, which was set up by President Barack Obama, would continue to exist past the November election, as its mandate should be “well beyond partisan considerations.”

Sophie Claudet is Europe and Middle East correspondent for Al-Monitor, based in Paris. She previously was Senior International Correspondent with France 24, and also worked for Agence France-Presse English service in the Palestinian Territories/Israel and Egypt. She tweets @SophieinParis