Nobel Peace Prize winner Shirin Ebadi told Sophie Claudet in an interview that renewed protests against the Iranian government are imminent and that the opposition is working behind the scenes even if the state's crackdown has kept it off the streets. She also gave her views on Iran’s nuclear program, Iranian politics, sanctions and the Arab revolutions. 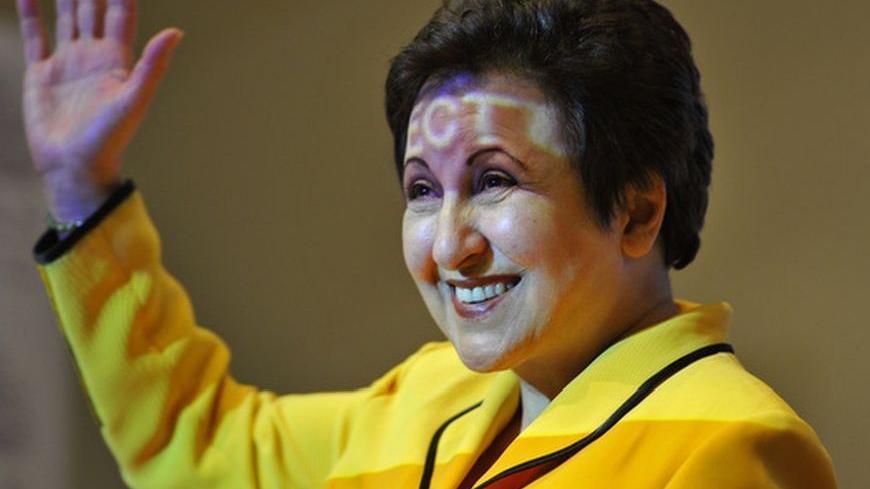 Iranian Nobel Peace Prize Laureate Shirin Ebadi delivers her speech, "The Role of Women in Promoting Peace in the Middle East," at the School of Oriental and African Studies in London February 2, 2011. - REUTERS/Toby Melville

Ebadi told Al-Monitor that Iran would soon have its own revolutionary spring. “It is not going to be too long before that day arrives,” she said, warning that the exact timing “was difficult to predict.” An uprising against the government, she explained, is “a function of Iran’s relationship with the United States, Iran’s relationship with neighboring states and the economic situation of the country.”

Tens of thousands of people took to the streets of several Iranian cities following the June 2009 presidential election to protest what they believed was a rigged contest that returned President Mahmoud Ahmadinejad to a second term.

The popular uprising was crushed by Iran’s police and security forces, leaving dozens dead, although no official toll was ever established and estimates vary between 20 and 150, depending on the source.

Ebadi said that although protests had since subsided, “they are continuing but in different forms.” Iranians opposed to the current government are active “through cyberspace” and resorting to “civil disobedience.” Others talk to foreign media despite the government's ban from doing so.

Ebadi also gave the example of mothers whose children have been killed or arrested by the authorities holding silent vigils in parks.

Anger is still brewing, she said, because “the economic situation of the people is becoming worse every day. In the past year, the value of our national currency has devalued by some 60%, and human rights violations in Iran are rife and widespread.”

Ebadi believes a first, urgent step toward change in Iran would be to amend the constitution, saying, “At least 90% of Iranians are unhappy with the current constitution because there are articles that are in total contradiction with democracy.”

Ebadi said she did not place any hope in change through elections, insisting that “they are not free and fair in Iran.” Ahmadinejad will not be able to stand for a third term in the June 2013 elections, but Ebadi said his camp still could gain.

“It is a power struggle, and it all depends on which side the Islamic Guards of the Revolution decide to support … but bear in mind that there are no free elections in Iran. What emerges from the election is not the vote of the people; this is this battle for power.”

Turning to Iran’s nuclear program, Ebadi said “I am opposed to [it] because even if it is for the purpose of energy, it is not good for the environment. Iran lies on an earthquake fault line, so we don’t want another Fukushima to happen in Iran.”

Ebadi condemned Western sanctions, which have hurt the Iranian people.

She cited a possible a ban on the use of foreign satellites by Iran to further isolate Ahmadinejad. She said the Iranian government has 14 international television networks which broadcast in various languages — and what they do is “incite and spread hatred and lies.” These networks are using the Hotbird satellite, which belongs to the France-based company Eutelsat. Banning access to Hotbird would “in the least weaken the government’s links with the fundamentalists who are abroad” and support Iran.

A former judge and leading rights defender, Ebadi naturally followed the revolutions that ousted several dictatorships in Tunisia, Egypt, Yemen and Libya last year. But she said it was too early to speak of an Arab Spring when it comes to women. “I have hope, and the day will come when women will realize their rights, but my point is that it is still a bit too early to mention the word ‘spring.’”

Asked whether she was concerned by the victory of Islamist parties in elections in both Egypt and Tunisia, Ebadi said that while most people in the Mideast region are Muslims, that “doesn’t mean our regimes must be theocracies. I believe that religion and state must be separate from one another.” She said she worries about the rise of radical Salafi movements in the Arab world whose targets of choice are often women.

“Of course, in Egypt and Tunisia, the women are still struggling against fundamentalism. But the thing is, the battle, the campaign by these women is still continuing and that is the important issue. They are saying the revolution has not yet ended.”

She deplored her country’s military support for the Syrian regime, as she saw little evidence it would ever let go of President Bashar al-Assad.

“So far, the Iranian government has said Syria is our red line … and the FSA [Free Syrian Army] has even arrested Iranian military commanders in Syria.” But when asked whether she objected to the fact that Syria’s opposition ranks were now joined by radical Islamist elements or jihadists, she skirted the question. “At the moment, what I am worried about the most is that the Syrian civilians are being killed.”

Ebadi, who has lived in exile in the West since 2009, said she had no immediate plans to return to her home country. “I miss Iran — my home, my husband, my relatives and friends are in Iran, and my office. But I can do greater work at the moment from outside Iran. Whenever I will be able to resume my human rights work in Iran, yes I will return.”