Gaza Christians, Hamas at Odds Over Conversions to Islam

The Greek Orthodox Church in Gaza Strip recently claimed that five Palestinian Christians were forcefully converted to Islam, sparking tension between Hamas and the Christian minority, writes Saleh Jadallah from Gaza. But the alleged victims have posted video saying they chose to convert, and Muslim groups say the same. 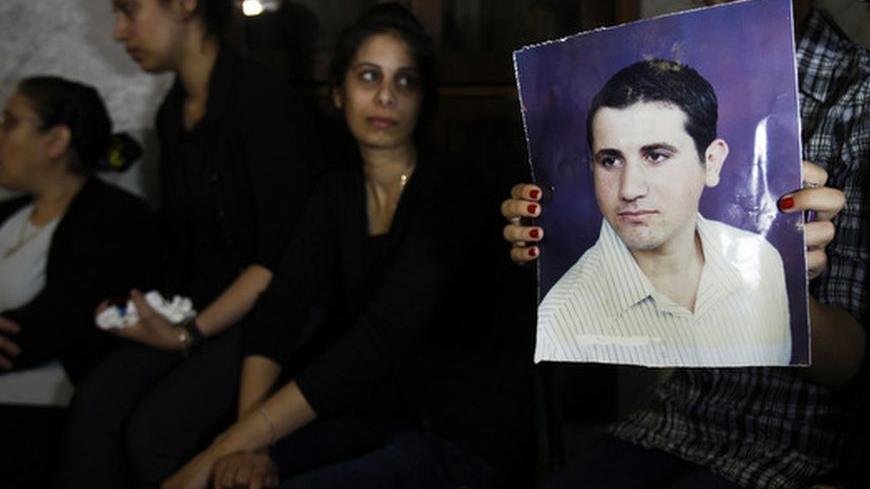 GAZA CITY — The recent conversion of Palestinian Christians to Islam has sparked tensions between Hamas, the Islamist group ruling the Gaza Strip, and the Christian minority here. Both publicly traded barbs for the first time since Hamas took over Gaza Strip from its rival, Fatah, after the 2006 parliamentary elections.

The Greek-Orthodox archbishop in the coastal Palestinian territory, Alexios, claimed that five Christians, a woman with her three daughters and a man, were forced to convert to Islam. But the Muslim Scholars’ Association in Palestine, a group affiliated with Hamas, said the converts had freely and officially embraced Islam on July 14.

Alexios further claimed that the five had been kidnapped by an Islamist group, which he said is working against Christians’ interests in Gaza. He did not mention the name of the group.

“Let them go back to their families and we will see if they adopt Islam freely or not. If they are really Muslims, we do not have any problem letting them stay with their families,” the archbishop said.

The clergyman said the Christian community sent a request to Hamas Prime Minister Ismail Haniyeh, demanding that he frees “the abductees.”

Last week, the male convert, Ramez al-Amash, 25, said he had freely converted to Islam in a video in Arabic posted on YouTube. “I am not kidnapped and I am fine. My message to my family is that I will go back to live with you,” al-Amash said.

He has since returned home but refused to speak to the media.

Also last week, Heba Abu Daoud appeared veiled with her three children in a similar video posted on YouTube, where she too said she had freely embraced Islam.

“I am not sick as you think, and my daughters are fine and happy. We are being hosted by a family. They respect us, they encourage us and they teach us the prayers," she says, visibly relaxed with her three smiling daughters and an older, veiled woman sitting by her side.

“I extend my greetings to my family, my father, my mother, my sisters, my brothers, and all my relatives, and I say I miss you and love you very much. That was my decision,” she added, making no explicit reference to her husband, who is still a Christian.

Al-Monitor could not verify the authenticity of the videos, but they bear the logo of a local Hamas TV station, and have done little to reassure Gaza’s Christians that these were not forced conversions.

Palestinian Christians also follow the stepped-up attacks and sometimes all-out persecution of their brethren in Iraq, Egypt and more recently, in Syria with great concern.

In Hamas-ruled Gaza, relations between the Islamist group and Christians had been remarkably uneventful and even cordial — that is, until the alleged incident of forced conversions last week.

Observers often note that Palestinian Christians are spared tension with their Muslim counterparts, unlike in other Arab countries, because of Palestine’s secular history and because both groups have a common enemy: Israel and its 65-year long occupation.

In fact, Gaza Christians were greatly relieved when Hamas waged an all-out war on a pro-al-Qaeda group in the southern Gaza Strip town of Rafah in 2009. The group, Jund Ansar Allah, or "Warriors of God" in English, was believed to be behind the bombing of a Christian youth organization. At the time, Hamas security forces killed the leader of the group, along with another 22 followers, after they declared the Gaza Strip an Islamic emirate.

Hamas and Gaza Christians share the same distaste for radical Salafist groups that have recently appeared in the Gaza Strip, albeit for different reasons. The former sees them as a challenge to its undivided rule. The latter is scared of being targeted because of their religion, as has been the case in other Arab countries.

But Hamas and Gaza Christians’ modus vivendi seems to be challenged by recent events. In the past week, dozens of Christians have staged almost daily rallies in the Greek Orthodox Church in Gaza City, denouncing alleged conversions. Angry protesters shouted slogans urging Hamas to protect them and held signs that read, “I am Christian and proud of my cross” and “We call on the world to intervene to protect Christians in Gaza.”

Hamas, a close ally of the Muslim brotherhood in neighboring Egypt, said that the five converts embraced Islam on their own free will, in a written statement.

Separately, the Muslim Scholars’ Association in Palestine called Archbishop Alexios' statements “fabrications.” Ahmed Shaaban, who heads the association’s media and public relations department, told Al-Monitor that the converts had approached the group to learn more about Islam once they had converted. But he insisted the five Palestinians had freely converted and were not kidnapped.

“Al-Amash is back home and he did not revert to Christianity,” Shaaban said, referring to the recent male convert. “He has been Muslim for five months now but he officially announced his conversion on July 14,” he added.

The Greek Orthodox Church pointed out that "a dangerous organization" is trying to convince Christians to change their religion, a move it said "threatens the existence of Christianity in the Gaza Strip." When asked why the church did not name the organization, Archbishop Alexios said," I do not know the name of this organization because there are many [Islamic] groupings in Gaza."

“This Islamic group is using dirty tricks to create fear and pressure." the church said in a statement. "They use dishonorable ways and drugs to scare the abductees.”

On the heels of the dispute, Ayman al-Batniji, spokesman for Hamas police, denied any kidnappings of Christians in Gaza.

“The man declared his belief in Islam willingly and the police tried to protect him after he called for our help when he had a problem with his relatives,” said al-Batniji, referring to Al-Amash. With regard to the Christian woman who also converted to Islam, the spokesman said Abu Daoud and her three daughters left their family and  “are now living in an apartment. We are here to protect them whenever they ask for our help.”

Batniji said Abu Daoud was unlikely to return to her husband, as Islam does not allow for a Muslim woman to live with a Christian husband. Islam does however permit a Muslim man to marry a Christian woman.

Eyad al-Alami, head of the legal unit at the Palestinian Center for Human Rights (PCHR), an independent organization usually critical of Hamas’ hard-line policies, said that his center had met and interviewed the five converts and reached the conclusion that they had freely embraced Islam.

“Converting to Islam does not contradict our principles as freedom of belief is a human right,” he added.

Deteriorating Conditions for Christians in Gaza

A Palestinian Christian who works for the Greek-Orthodox church in Gaza said he is seriously thinking of leaving the country because of “a difficult situation resulting from the Israeli occupation, a shattered economy and growing fear of radical Islamist groups."

The man, who asked to remain anonymous, said he believed like many Christians in Gaza that Rami Ayad, a fellow Christian killed by an unknown group after being abducted in 2007, was murdered because of his religion. The culprits have yet to be identified and an official source at the interior ministry told Al-Monitor that “the circumstances are not clear, no case was brought to justice and there are no suspects.”

The church worker, a father of three, said: “After the incidents of last week, I am seriously thinking of emigrating with my family. We feel oppressed.”

Some 2500 Christians live in Gaza, one of the most densely populated areas in the world where 1.5 million people are squeezed in a 365 square kilometers narrow strip. They practice their faith in three main churches and belong either to the Greek Orthodox or Roman Catholic Church.

The man speaking on condition of anonymity said he believed that around 600 Christians have left Gaza since Hamas took control of the Gaza Strip in 2007.

“I am very happy to see democratic changes in the Arab World. Things are much better without corrupt regimes. But I hope the scenarios of Iraq and Lebanon will not repeat themselves against Christians here,” he said, referring to the civil wars that rocked both countries.

Saleh Jadallah is a Palestinian print and photo freelancer in Gaza