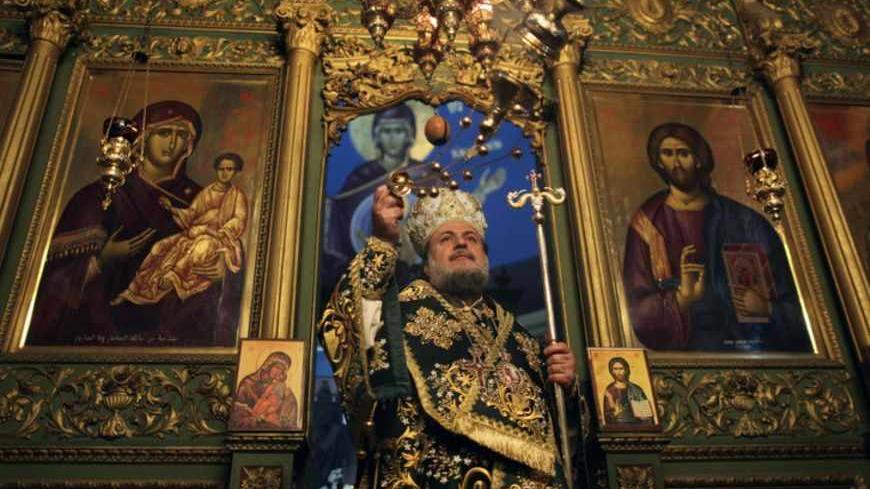 The smell of fresh white paint lingers in the air, and the glimmer of the small gate catches the eye. The Catholic-affiliated School of the Holy Family has tried hard to hide the traces of black left by burning tires. Inside, Al-Monitor’s reporter waits for an interview in the office of Father Jorge Hernandez, the school's headmaster, but he declines to speak to the press.

This is what typically happens when talk concerns Christians in the Gaza Strip. It is a delicate subject that no one wishes to address, especially after incidents like the one on April 13, when at dawn a small group of youths burned tires in front of the school’s gate, smashed cameras and broke windows.

Ayman al-Batniji, spokesman for the Gaza Police, explained to Al-Monitor that the episode involved soccer. The school’s guard had prohibited adolescent boys from the neighborhood from playing soccer in the schoolyard and reported them to the police. Afterward, the youths took their revenge. Batniji stressed that the boys' actions were not, by any means, a sectarian attack.

Civic activist Mustafa Ibrahim, however, believes that the police department should have dealt with the issue without delay, particularly given that the attack coincided with new educational laws that ban mixed-gender schools. The laws are aimed at Islamizing the Gaza Strip, which has led some to believe that the attack on the school was the result of incitement, most likely by extremist groups.

Ibrahim observed that the political split between Fatah and Hamas had been followed by sectarian attacks. Subsequently, the fear by Christians’ for their lives intensified, pushing many of them to emigrate, despite attempts by Hamas to alleviate their anxiety. Some extremist groups still consider Christians to be infidels, so when a conflict occurs between these groups and the government, Christians end up paying the price.

There are approximately 1,500 Christians in the Gaza Strip, the majority of whom are Orthodox. In the mid-1990s, however, they numbered some 5,000. A worker in one of Gaza’s churches who referred to himself by the initials R.A. believes that the emigration of a large number of Christians has been caused by economic hardship rather than sectarian incidents and threats.

Speaking to Al-Monitor, civic activist Elias al-Jalda said that Muslims and Christians alike are emigrating, but the trend is more noticeable among the Christians due to their smaller numbers. Jalda thinks people are emigrating for a number of reasons, including the wars waged by Israel, fear of religious extremism and the pursuit of a better future.

According to reports issued by human rights organizations in the Gaza Strip, Rami Ayad, a Christian, was killed in October 2007 by extremists, and in 2008, the library of a Christian organization for youth was blown up and the guard kidnapped. The string of such incidents continued. In May 2008, the gate of the Rosary Sisters School was blown up, and in August 2009, Christian gold trader Akram al-Amash was killed for financial reasons. In February that same year, an explosion occurred in the private parking space belonging to Christian doctor Maher Ayad.

In July 2012, the Orthodox Church issued a statement accusing the Islamic Group of kidnapping five Christians and forcing them to convert to Islam. Later that year, in December, 45-year-old Suhail Fouad Ayad, his wife and his 16-year-old son were shot following a financial dispute.

Ramez al-Amash had been one of the Christians subjected to conversion. In further exploring this and other incidents, Al-Monitor met with Ramez’s father, Hanna al-Amash, in his small shop in the Old City of Gaza. Amash was visibly upset as he recalled the episode involving his only child. “My son is a Christian. He is currently studying accounting in Sweden and is content there. He has nothing to do with anyone in Gaza. Let them say whatever they wish. My son is a Christian and I am living here just like everyone else. I feel safe. The only thing I need is to see my son.”

Nabil Ayad, the 51-year-old brother of Suhail, denied that their shooting was carried out for financial or sectarian reasons. He stressed that a carpenter who had been working in his brother’s home had shot the family in order to rob them.

In a phone interview with Al-Monitor, Ayad demanded that the law be allowed to run its course and that the perpetrator, who he said was mentally disturbed, be punished. Ayad revealed that he had received text messages threatening revenge if he did not drop the charges and that his brother had recently recovered from the bullets that struck his liver and lung.

An official in one of Gaza’s churches who preferred to remain anonymous wondered about the reasons behind the increase in the number of criminal acts, which had not been common occurrences in the past. “Is it because they have the impression that we, as Christians, are a minority in society? The weak are always taken advantage of, similar to the weak student at school whom everyone used to bully.”

He continued, “The people are not safe, and how can they be, when you have a minority facing extremist ideas? We, as Christians, are concerned about everything, especially the future. There are some with twisted minds who believe that we are infidels. Even if some of these incidents are spontaneous and driven by misunderstandings, our main concern is that we have no clue about what will happen next.”

For his part, Jalda said that Christians have lived in Palestine for thousands of years and have never faced any type of organized religious persecution, including despite attempts under the Israeli occupation to incite sectarian strife. He explained that when Hamas won the elections that brought them to power in 2006, extremist religious speech intensified, which encouraged mobs to carry out acts that go against the morals of Palestinians. These included attacks against Christian schools and churches and the killing of Rami Ayad in 2007 and the Italian activist Vittorio Arrigoni in 2011.

Jalda added that the Hamas government has not succeeded in serving as a government for everyone, and in specific, has neglected those who disagree with it intellectually and ideologically. He said that decisions made under Hamas' rule — such as the ban on mixed-gender schools and the ban on the import of alcoholic beverages, which was ordered a few years ago based on a decision by the minister of interior, not by law — hinder people with different ideologies from leading their lives normally. Moreover, Jalda believes that implementing decisions and laws based on religious instead of secular beliefs is a matter that raises concerns, not only for Christians but also for leftists and secularists.

Ibrahim argues that Hamas’ attempts to ratify and Islamize new laws in the Legislative Council have led several segments of society — Christian or otherwise — to lose faith in the government. As a consequence, the government has a duty to regain the trust of its citizens by presenting itself as a national Palestinian movement.

Islam Shahwan, spokesman for Gaza’s Interior Minister, strongly disagrees with his predecessors and believes that Christians in the Gaza Strip live in safety. The government considers them full-fledged citizens who are not dealt with on the based on their religion, he contended. On the contrary, Shahwan asserted, the government is constantly meeting with Christians to listen to their demands and concerns.

During the inteview in his office, Shahwan told Al-Monitor that the government provides protection to churches and Christian schools, because they are societal institutions and a part of Palestinian history. Any attack against them by an extremist group is punished by the law. As evidence, the perpetrators of the Holy Family attacks were arrested. Shahwan also said that most of the incidents committed against Christians have been criminal, not sectarian, and are simply a part of society.