How Iran Talks Were Saved From Verge of Collapse

New details on the Iran nuclear talks this weekend, touted as being very positive, now show the meeting, in fact, deteriorated. Laura Rozen spoke to inside sources who said Iran was "relentless" in its request to delay European sanctions and that the atmosphere had grown extremely strained and tense. 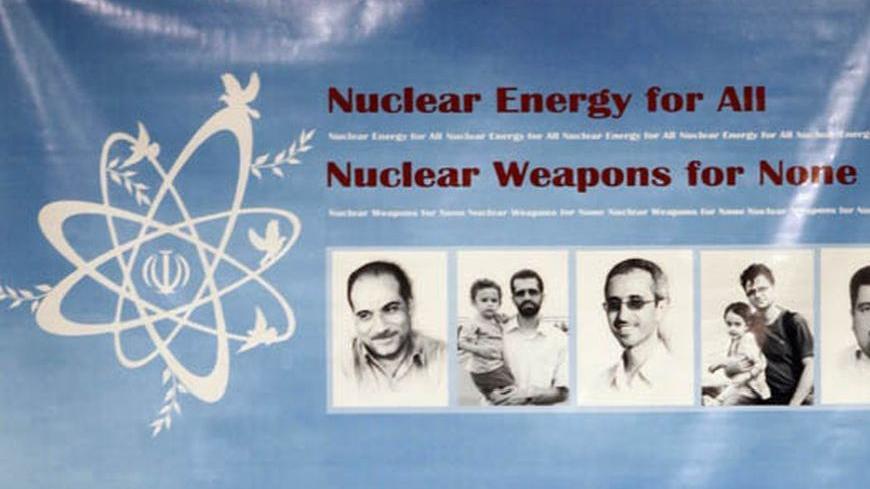 A banner for the Iran nuclear meeting in Istanbul April 14, 2012. - REUTERS/Osman Orsal

New details on the Iran nuclear talks in Istanbul this weekend, which were largely touted as "positive," now show the meeting had, in fact, deteriorated.

European Union foreign policy chief Catherine Ashton and Iran’s chief nuclear negotiator Saeed Jalili kicked off the first international nuclear talks in over a year with a three-hour dinner at the Iranian consulate in Istanbul Friday night. The mood at the informal dinner — meant to build rapport between the two chief negotiators ahead of the formal talks getting underway the next day — was described by aides as “good and friendly.” Conversation deliberately steered away from specific discussion of the Iran nuclear issue. A European diplomat apprised of the conversation told me Monday that they discussed political-party funding in the US among other topics, including the Arab spring.

Whatever rapport was established at the Friday dinner may have helped save the conference from what some feared was the brink of collapse Saturday night.

By the conclusion of the meeting Saturday night, when Jalili and Ashton held another meeting, the atmosphere of the high-stakes talks re-launch had grown strained and tense — unbeknownst to most of the 500 journalists sitting in the Istanbul congress venue’s basement press center.

In the 90-minute meeting held in the office of the Turkish foreign minister, who vacated it, Jalili “relentlessly” pressed Ashton for a delay in European Union oil sanctions set to go into effect by July 1, another western diplomat told me Tuesday.

“During the Ashton bilateral, it was Jalili of old,” the diplomat said on condition of anonymity Tuesday. “He asked 100 times” for a delay in the oil sanctions.

Ashton — who later privately characterized her Iranian counterpart during the encounter as a “relentless” character in pressing the demand — demurred, saying that was not realistic, and not in her mandate, aides said. She was able to steer the meeting back to a successful conclusion, based mostly on what was agreed to in the two-and-a-half hour morning plenary meeting involving all seven delegations.

“The morning session was very positive: the vibe ... was, 'wow, they are engaging … we know what the principles are',” the Western diplomat said on condition of anonymity. “But let’s not get excited: it’s going to be a bloody long road for them to negotiate, a long and painful process.”

“In the afternoon, we get back and said all the delegations are available to do bilaterals if you wish,” he continued, “and it went quiet. Nothing happened.”

After what all parties describe as a successful and constructive morning plenary meeting involving the six nations in the P5+1 negotiating group — (the United States, United Kingdom, France, Germany, Russia and China) — and Iran, during which the sides agreed on the broad principles for re-launching a negotiating process and to hold the next meeting in Baghdad, the Iranians basically rebuffed offers to hold bilateral meetings with all the delegations except the Chinese.

As the Western delegations sat waiting to see if the Iranians had any intention of responding to the offer, Turkish foreign minister Ahmet Davutoglu met with the Iranians to try to clarify their plans, according to European diplomats. A spokesman for Davutoglu denied that Davutoglu had tried to facilitate any of the bilateral meetings, except the final one between Jalili and Ashton, which was held in his office. American and European diplomats — who have effusively praised the role of the Turks in hosting this year’s conference — suggested that Davutoglu may have tried to facilitate bilateral meetings, including one between the United States and Iran, but was essentially rebuffed by the Iranians for their own petty reasons. Regional analysts have theorized that the Iranians didn’t want to deliver Turkey such a high profile diplomatic achievement, given the two nations’ growing tensions over Syria, among other matters. “We don’t need Davutoglu to facilitate a bilateral between Ashton and Jalili,” a diplomatic source responded.

One sign of the prevailing sense of uncertainty: Saturday afternoon, Reuters picked up a report — wrong, it turned out — by Iran’s semi-official ISNA news agency that Jalili had accepted the Americans’ offer for a bilateral meeting. “Not that we know of here,” lead American negotiator Wendy Sherman told European colleagues when they inquired if that was the case.

Sherman — the undersecretary of state for political affairs and former Clinton-administration North Korea negotiator — is winning praise on her first round of leading Washington’s delegation in the Iran talks, from both those who see her as appropriately ‘tough” with Tehran as well as those who advocate more vigorous American efforts to advance a dialog with Iran. They say she asks all the right questions and understands that tough sanctions alone will not necessasily get Iran to change its nuclear behavior. Sherman, who arrived in Istanbul from Washington with the American delegation Friday at 1:30 pm, did not even get a chance to take a shower before the talks among the six nations in the P5+1 began Friday at 2:00, a US official said.

Despite the lack of a US-Iran bilateral meeting, the Iranian delegation was engaged and attentive when Sherman directly addressed them during the morning session, several diplomats said. “The Iranian delegation body language when Wendy spoke was direct and engaged,’ the European diplomat said. “Every delegation had the opportunity to speak directly to them.” After Ashton opened the meeting, the Russians spoke first (stressing, according to the diplomatic source, “Look, we are all unified on this, there’s no way you can split us.”); followed by the French (who “were firm but not tough,” the diplomat characterized), then the Chinese, the Americans and the Germans, with the British "bringing up the rear.”

Diplomats acknowledge that a US-Iran bilateral would have increased confidence in the meeting but insisted that the fact that one didn’t occur this time shouldn’t take away from the key success of the meeting: namely that a negotiating process which had been moribund for more than 15 months was able to be re-launched. And they praised Ashton for steering the meeting over some quite rough patches.

“After one year of saber-rattling and war-war, the international community seems to have begun a process with Iran that looks like it could lead to greater international confidence in Iran's assertion that it does not seek illegal nuclear capabilities,” the European diplomat told me. “Part of the reason for having reached this stage has been pressure.”

But another reason, he continued, is that  Ashton has earned “a status as a genuine, open-minded but tough-thinking negotiator who the Iranians trust and are willing to deal with,” and one “who can keep the sometimes fractious P5+1 together.” At the pre-talks dinner, Ashton “rebuilt a rapport with Jalili,” he continued. “During the talks, she ran the show — choreographing the political directors, ensuring their intervention matched her script. As the day progressed, she ‘deployed’ the Russians and even the Turks to engage with the Iranians and persuade them to engage constructively.”

“Finally, in one-to-one negotiations, she headed off unrealistic Iranian demands and got everyone to agree … that a next meeting had to be held; and crucially … that it had to take place quickly so as not to drag this process out more than it needs to," he said. Indeed, the next Iran nuclear talks, scheduled to take place May 23 in Baghdad, is a couple weeks later than the Americans had hoped, diplomats told me. Washington had been hoping for a May 10 meeting date. But Ashton’s schedule could not accommodate one before May 23.

And that may have been deliberate too — to try to put a bit more time on the clock for a negotiating process that is realistically unlikely going to solve the Iran nuclear issue at the next meeting in Baghdad either.