Three high-powered women are the principal negotiators for the P5+1 team in the Iran nuclear talks, which creates a novel working environment for their Iranian counterparts, because women generally can’t get top government jobs in the Islamic Republic. This raises an intriguing question: Could the presence of women across the table from the Iranians change the dynamics in the nuclear talks? 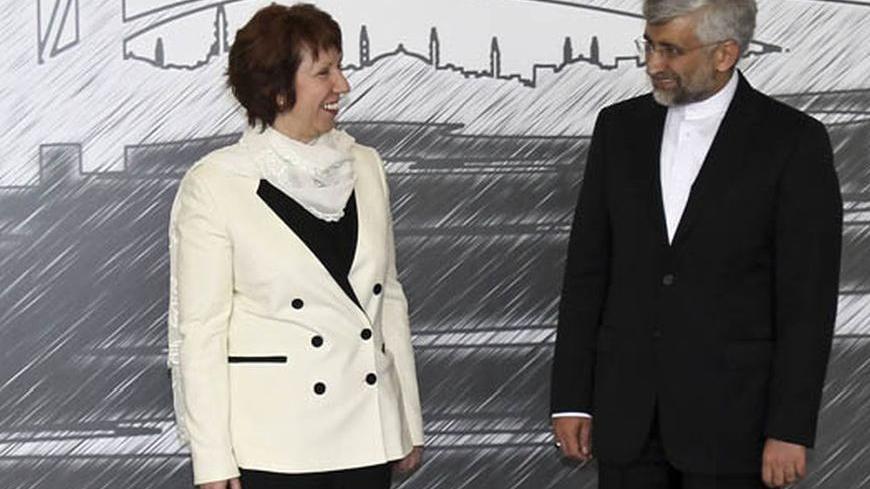 Photos of the high-stakes Iran nuclear talks held in Istanbul earlier this month tell their own story.

Jalili is in the Iranian male uniform of black suit and white, collarless shirt; Ashton wears black pants and a cream blazer over a black top, with a white scarf discreetly wrapped around her neck and shoulders. In one photo, Jalili looks to be genuinely amused and grinning as Ashton, arms outstretched in a “ta-da” pose, moves toward him for a photo spray. What a contrast from a year ago, when a strained-looking Jalili stood, eyes averted and brow furrowed, at a clear distance from Ashton.

Unusual for such talks — and particularly novel for the Iranians — Ashton is but one of three high-powered women who are the principal interlocutors for what is known as the P5+1 — the five permanent members of the UN Security Council plus Germany.

Ashton’s deputy is Germany’s political director, Helga Schmid, who is to meet with Jalili’s number two, Ali Bagheri, for preparatory talks before the next plenary round in Baghdad May 23. The US delegation is led by Undersecretary of State for Political Affairs Wendy Sherman.

The 1979 Islamic Revolution in Iran allowed more women to become educated and to enter professions denied them in Arab countries such as Saudi Arabia. An Iranian woman — Shirin Ebadi — was the first Muslim woman to win a Nobel Peace Prize and she and others have figured prominently in civil society and political protests. But a host of discriminatory measures regulate women’s behavior in Iran and they generally cannot rise to senior jobs in the government of the Islamic Republic.

Which leads to this question: Could the presence of women across the table from the Iranians change the dynamics in the nuclear talks?

While Western governments credit tough sanctions imposed over the past year for prodding Iran to adopt a more constructive posture, Ashton worked hard to set up an atmosphere more conducive to re-launching negotiations.

Measures included messaging Iran through multiple interlocutors on the need to demonstrate seriousness, to kicking off the meeting with a three-hour, rapport-building informal dinner with Jalili at the Iranian consulate in Istanbul the night before the talks.

Before the meeting, Ashton also reached out to policy makers from Latin America and Central Asia, where the Iranians “have personal relationships, to send the right message,” said a European diplomat who spoke on condition of anonymity. The focus “was on how to create a special opportunity which is easier seized than rejected.”

Atmospherics also played a role. Another Western diplomat who participated in the negotiations told Al-Monitor that the women negotiators made a conscious decision “to dress conservatively” to avoid making the Iranians feel uncomfortable.

Farzaneh Milani, a professor of Persian literature and women’s studies at the University of Virginia, says the fact that the top Western negotiators are women could have a positive impact.“We want to create an environment, an atmosphere that is more likely to” be conducive to compromise, the first Ashton aide explained.

In her 2011 book, Words, Not Swords: Iranian Women Writers and the Freedom of Movement, Milani describes two means of conflict resolution in Iranian culture.

The first is captured by the Persian proverb, “Kill a cat in the nuptial chamber.” It describes how a groom tames a notorious shrew on their wedding night by ordering a cat to bring him a glass of water and beheading the unfortunate animal when it fails to do so. The terrified bride, presented with the same request, immediately complies; the conflict is resolved through male dominance and violence.

The second model is that of Scheherazade. She volunteers to wed the murderous King Shahriyar, who, after his favorite wife betrays him, marries a series of virgins and kills them after the wedding night. As we all know, Scheherazade tames her husband using words, not swords, by spinning tales for 1001 nights.

“She took her stories there and her patience and her knowledge of negotiations,” Milani says. “She empathized with the king and tried to come to grips with the past of the man she was dealing with…The first story is an example of “how men resolve conflicts, the other is how women do it… I’m very hopeful that they can do something that men have not managed to do.”

Haleh Esfandiari, director of the Middle East program at the Woodrow Wilson International Center for Scholars, says while the Scheherazade saga is “not a good comparison,” the Iranian negotiators have come to respect their female interlocutors.

“They have by now concluded that Ashton is a very tough cookie and cannot be pushed around,” Esfandiari said. “They have probably adjusted themselves to dealing with her. Spending three hours having dinner with her for Jalili was a very big step. She is his counterpart and they have developed a very professional and cordial relationship.”

As for Sherman, Esfandiari said the Iranians had “done their homework and know she is an expert” who led US negotiations with North Korea in the Clinton administration.

Sherman and Schmid moved into their jobs, which include overseeing day to day running of Iran nuclear negotiations, last year; Ashton has held the title of EU high representative for foreign policy since 2009.“What impressed them is the professionalism and businesslike attitude of these women,” Esfandiari said, conceding that “a little charm” doesn’t hurt either.

Ashton “is trying to walk a tightrope,” the European diplomat told Al-Monitor. “She wants to show [the Iranians] in word and deed that these negotiations are a genuine opportunity to move forward. But [she is also trying] not to be hoodwinked and fooled by negotiators who have [in the past] strung out and wrapped negotiators in games of politics.”

“Where Cathy can be strong is she has a very easy way with people,” the diplomat added. “She can bring difficult interlocutors to a place they feel more comfortable and could compromise.”

Though Ashton carries among her sometimes-bewildering titles that of “Baroness,” she doesn’t come from a privileged background. Rather, Ashton, 56, a former antinuclear activist and British Labour Party worker, got the title when she was named to the House of Lords by Tony Blair in 1999. In fact, she comes from a working class family of coal miners in northern England and was the first member of her family to attend university.

In the late 1970s and early 1980s, she was an administrator and later treasurer and vice-chair of an anti-nuclear activist group, the UK campaign for nuclear disarmament.

That youthful activism is “obviously a good thing for her” in the eyes of Iran’s nuclear negotiators, the European diplomat said. “It shows her attitude on nuclear weapons from her youth — which has been used at points in the West as an argument against her — is an argument in her favor” in the view of the Iranians, who have frequently railed against perceived international “double standards” that permit other countries to have nuclear weapons but sanction Iran for its as-yet weaponless nuclear program.

A relatively junior European Commission trade official in Brussels, Ashton landed her present job as a compromise candidate and has “done reasonably well” in the confines of a 27-member bloc that works by consensus, an American diplomat who worked on Europe but asked not to be named told Al-Monitor. “She can’t be pushed into places where there isn’t consensus.” In the case of Iran, where there is, Ashton “is delivering,” he added.

While her lack of pretension and un-posh style have made her the occasional object of snobby derision in the British press, her modest roots may be another asset in dealing with the Iranians.

“She is totally working class,” the European diplomat said. “The criticism from the British press if anything is that she is from northern England, and speaks with a northern accent…Her manner and style are not that of a globe-trotting foreign minister. She has a subtle way of working. Her brand is relational diplomacy, whereas for the US, it’s power diplomacy.”

It is, of course, far too soon to say that these negotiations will succeed. Jalili refused to meet one-on-one with Sherman and in his final meeting with Ashton, he relentlessly pressed her to delay an EU embargo on Iranian oil due to go into effect in July, Al-Monitor discovered.

“He tested her, [but] you can expect that,” the European diplomat said of Jalili, who holds the title of Secretary of Iran’s Supreme National Security Council and is a veteran of the Iran-Iraq war and the paramilitary Basij. “Of course, they test and prod and push. They are keen for sanctions relief. They would like to get it for absolutely nothing. And she headed them off."