Egypt's currency is headed toward devaluation, and could lose as much as 50% of its value in the coming months. Carina Kamel writes that the only question is whether the pound’s fall will be messy and chaotic, or if Egypt’s new leaders can get their act together quickly enough to keep the process managed and orderly. 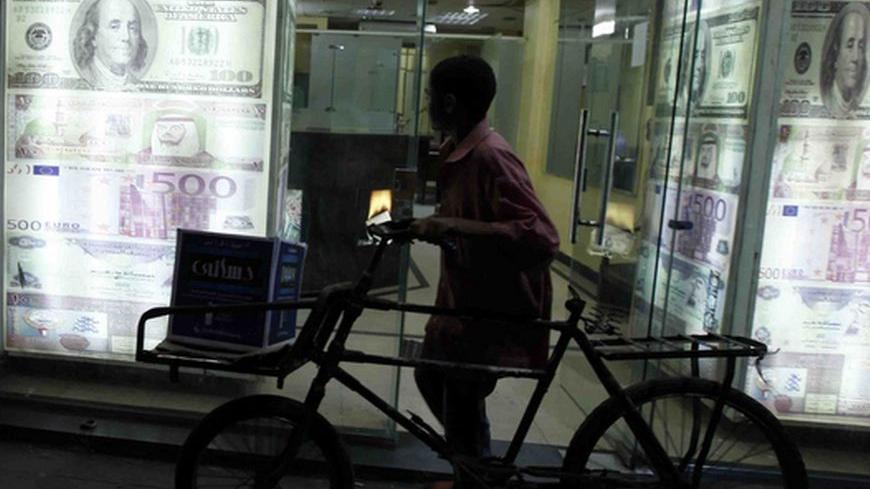 A boy pushes a bicycle as he walks past a currency-exchange office in Cairo September 18, 2011. - REUTERS/Mohamed Abd El Ghany
July 5, 2012

Egypt’s central bank never discusses it publicly, but the Egyptian currency is headed toward devaluation in the coming months, whether policymakers like it or not. The only question is whether the pound’s loss of value will be messy and chaotic, or if Egypt’s new leaders can get their act together fast enough to keep the process managed and orderly.

With the country’s safety net of foreign reserves now barely large enough to cover the cost of three months of essential imports like fuel, the next few weeks will be crucial to staving off a crisis.

But as with much of post-revolution Egypt, decision-making remains opaque and swift action is not forthcoming. It is unclear if President Mohammed Morsi possesses the authority to appoint a finance minister, let alone formulate a coherent economic policy.

This week, the new president met with the Egypt’s Central Bank governor on two separate occasions (Sunday, July 1 and Tuesday, July 3) to check on the health of the Central Bank and the banking system, according to a spokesperson.

Many foreign investors who fled in the midst of transition turmoil are sitting by the sidelines and do not plan to return until the future of Egypt’s currency becomes more clear. Egypt urgently needs foreign investment, with key tourism revenue greatly diminished and foreign reserves halved after the ruling generals of the Supreme Council of Armed Forces resorted to draining them to keep the pound afloat.

“I believe the Central Bank will continue to stand behind the currency as long as it can,” said Wael Ziada, head of research at regional investment bank EFG-Hermes.

But if political tensions between the SCAF, the new president and the disbanded parliament derail the assembling of a coherent economic plan, the bank may not be able to prevent a disorderly devaluation in which the pound would lose 50% or more of its value. If that happens, inflation will soar, prices of basic goods will skyrocket and, in a country with high poverty rates, social unrest could follow.

Even in an ideal scenario in which the pound loses between 10 and 30% of its value over the next few months, the currency could face yet another blow further down the line, possibly next year, once economic growth starts to pick up.

“Economic recovery could prove to be a double-edged sword: On the one hand, it is obviously very good for job creation, but on the other hand, it will start putting pressure on the currency if it is not met by significant capital inflows,” said Ziada of EFG-Hermes.

Ziada explained that because Egypt’s imports are skewed toward necessities like subsidized commodities, hydrocarbon products and capital goods, the trade deficit could widen once local demand for imports increases. That, in turn, would put further pressure on the pound.

A return of capital flows and investment would soften the blow of devaluation and pump liquidity into the economy. But that is unlikely to happen until the political situation becomes clearer. Two hurdles that have yet to be addressed: the drafting of a constitution and the dissolution of the parliament.

Hirsh sees tensions between the presidency and SCAF rising and noted that President Morsi’s decision on July 1 to raise salaries for civil servants was a gesture he interpreted as an attempt to win the support of public sector workers who will be “crucial in curbing the influence of the military in the country’s political institutions.”

External financing would also provide immediate relief, something many economists strongly urge, especially in light of the government’s record-high cost of borrowing, which reached 16% at debt auctions

But a key deal with the International Monetary Fund for a $3.2 billion loan has yet to materialize, delayed after months of political bickering between the Islamist-dominated parliament and the military-backed cabinet. Central to their disagreement was the government’s economic program, which Islamists described as vague and which the IMF insisted must gain “broad-based support” from across the political spectrum before any loan agreement.

An economic advisor to President Morsi confirmed that Egypt is open to resuming talks with the IMF but indicated that there could be some change to the terms and conditions once a new cabinet is formed.

But forming a government could prove challenging, given the complexity of negotiations with the army around key ministerial positions and also amid reluctance on the part of many qualified politicians to hold office in an Islamist government.

In the meantime, it is unclear who calls the shots in financing talks: the SCAF generals, who have retained legislative power; the new president, whose authority has been clipped or the outgoing government, which has been making a variety of economic announcements in recent days.

It is possible that the ministers, many of whom are on their way out, are trying to cobble together enough funds to tide Egypt over. Already, Saudi Arabia deposited $1 billion of direct budget support into the Central Bank’s coffers in June.

And one day after Morsi took the presidential oath, the outgoing government signed a $1 billion deal with the Islamic Development Bank to finance energy and food imports.

A few days later, the finance minister said Egypt needed at least $5 billion in long-term financing as an initial injection in the current period to fund essential needs like food imports and development projects aimed at job creation.

But Egypt is running out of time and options. Economists says officials should hurry up and take the IMF loan, being offered at 1.5% interest, a fraction of current borrowing costs.

The initial agreement was for a $3.2 billion in financing, although Brotherhood sources have indicated the amount could change. While only a fraction of the $11 billion needed to avoid a balance-of-payments crisis and plug the budget deficit currently around 10% of gross domestic product, the loan would send a signal of confidence to foreign investors and global financing institutions and unlock further aid.

Opponents of an IMF deal fear the austerity strings that accompany any lending, with the legacy of a deeply unpopular and mismanaged Mubarak-era IMF structural-adjustment program still fresh in their minds.

The breathing space Egypt may have bought itself with the swearing-in of a new president will not last long.

“Today we are in a better position — at least we have avoided a second revolution,” said Hirsh of Capital Economics. “We don’t think we are out of political trouble, but at least in [the] very near term, a worst-case scenario has been avoided.”

Alia Moubyed of Barclays Capital says that Egypt could avoid a disorderly devaluation “if a newly formed government manages to gather domestic consensus and resume negotiations with the IMF to mobilize external financial support before September.”

One factor working in Egypt’s favor is the low level of foreign debt, or “leverage,” in the banking system. The majority of public debt is held by local banks who don’t borrow large amounts from abroad, so the risk to the financial system would be contained.

“Egypt is a cash-rich society and the lack of private indebtedness is a very strong positive economic factor for Egypt, setting it apart from the southern EU states, for example,” said Angus Blair, founder of the Cairo-based think tank Signet Institute. “Even the banking sector remains relatively liquid.”

Egypt might also be able to avoid a disorderly devaluation if it can woo investors back, who might be persuaded to return given Egypt’s long-term prospects, which remain positive.

“Today there is a mindset [that] the central bank is defending the currency, there are capital controls in place, foreign direct investment is gone — all this needs to change,” said Ziada of EFG-Hermes. “You need to reverse the mindset that there is an upcoming disorderly devaluation.”