The inhabitants of Azaz — always an unruly lot known for smuggling, and in some cases, drug running — were in a celebratory mood as they showed off their “liberated” city. Still, in the bloody aftermath of the recent bombing, efforts to form new institiutions, like courts, remain a challenge. Justin Vela reports for Al-Monitor. 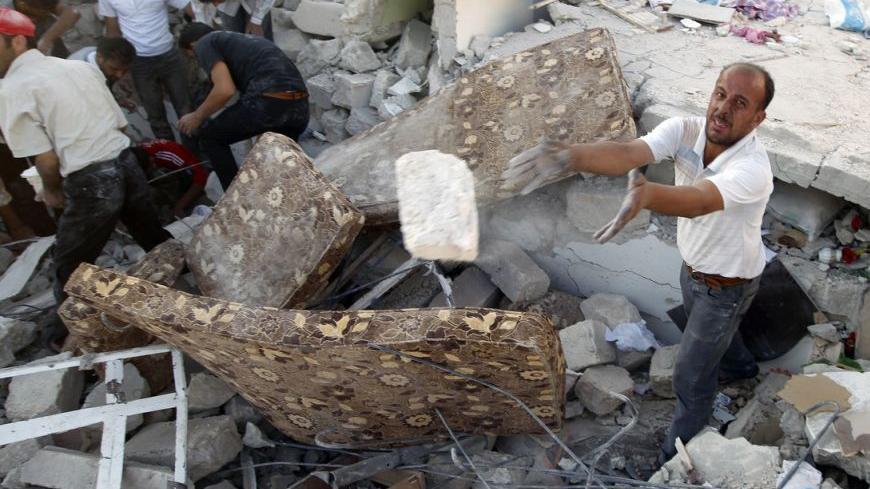 A man searches for the bodies of people who were killed during a recent Syrian Air Force air strike in Azaz, Aug. 15, 2012. - REUTERS/Goran Tomasevic
August 21, 2012

AZAZ, Syria – Tiny pieces of a dead woman were picked up one by one and placed in a white piece of cloth. It might have been a scarf or perhaps simply at hand when it was needed for a final task that certainly had not been its intended purpose. The young men filled the cloth with bits of the woman’s remains and moved broken pieces of concrete from around the rest of her body. The men carefully collected as much of her as possible.

The cloth went into a grave along with the rest of the woman, one of at least 40 victims of the Aug. 15 bombing in Azaz, a city of 75,000 in northern Syria, about three miles from the Turkish border. By bombing Azaz, the Syrian regime seemed to be making clear its belief that Turkey, despite its sometimes aggressive rhetoric, was not going to intervene to stop the bloodshed in Syria. The attack also came just one day after US Defense Secretary Leon Panetta told The Associated Press that a no fly-zone imposed by Western countries was not a priority.

Despite this prevailing attitude from the West, Syrian rebels have continued to make gains against a military and security apparatus that had held the country in check for 40 years.

Azaz was freed from government forces on July 19 — something that seemed unthinkable only a few weeks before. Opposition forces suddenly held the roads to Turkey. In an interview, a rebel commander in the Liwa al-Tawhid, or the Unity Brigade, a newly formed group of various rebel battalions around Aleppo, claimed that regime forces had been cleared from a 200-by-40 kilometer area.

“In the beginning we were used to being attacked every day,” said Yasser Haji an activist from Marea, a town southeast of Azaz. He said that had changed during Ramadan 2011 as the first villages around Aleppo province began to free themselves from regime forces. Unlike other areas of the country, there were no Alawite villages and only two Shiite villages, the inhabitants of which might have acted as militia with regime forces against the opposition. The roads were relatively safe, with the exception of the main highway between Azaz and Aleppo because of the presence of a regime air base that shelled the surrounding villages every afternoon and evening.

Azaz's inhabitants — always an unruly lot known for smuggling, and in some cases, drug running — were in a celebratory mood as they showed off their “liberated” city. In the days before the Aug. 15 attack, children played on an abandoned tank. They hung from its barrel and clambered on top of its turret. “Do you think it is beautiful?” one man said. “It is beautiful because we are free and the tank was captured from Assad.”

There had been no electricity or bread for two months, said Mohammad Nu, 31, an activist who wore a pistol on his side. “The whole situation changed when the regime came out of Azaz,” he said, adding that although a shortage of gasoline and food continued, the situation was far better than it had been. Safety was assured, but the “human condition” was still a problem, he said. “We have a lot of poor families who are needing gas and milk for babies. We need aid for the families who have come out of Aleppo.”

He insisted: “The situation is stable. We have bread, and we have electricity. Safety is 100%.”

Other Syrians in Azaz remained unconvinced by such proclamations, and the air strikes later proved them to be correct.

Now, it was Aleppo, not Azaz, that saw street-to-street fighting, bombings and constant shelling. Nu said that more than 600 families had fled to the relative safety of Azaz from Aleppo. Many of them were housed in three schools in the town.

Ahmad Hamda, 29, who was originally from the town of Menagh, had arrived in Azaz from Aleppo 10 days earlier. He was married, but with no children. First he had fled from Menagh to Aleppo, which he thought would remain calm. Yet, the war came to him there, and he fled again as, Hanano, the district in Aleppo where he lived, was shelled.

Hamda said that there were 37 families from Aleppo living in the school, 130 families total. Some food was being provided to them by the Red Crescent and wealthy residents of Azaz. “We need blankets. We are sleeping on the floor,” he said. In one room, five men were, indeed, sleeping on the floor. Many doors were open and not everyone had a blanket or mattress. Water covered the end of the hallway in a corner where dishes were washed. The smell of too many people living together permeated the place.

Omabda, 45, a woman from Aleppo, said that she had arrived one week before. Her husband was dead, and she had seven children. She said that she had been terrified by the fighting in Aleppo, but at the same time did not want to join the 70,000 Syrian refugees in Turkey. She was afraid to be in a foreign country where she did not know anyone. Yet, the safety offered by Azaz would not last long, she said. It was a statement that perhaps could be made of many rebel-held regions of Syria. It was never clear where the regime would attack next. “It is not safe in [Azaz]. I am afraid of the battles coming here again. We are expecting to go to Turkey and are preparing to go when the shelling begins in Azaz.”

In the next room, a man named Ahmet, 31, and his wife, who he refused to name and who did not speak herself, said that they were waiting for Azaz to be attacked. The couple had a newborn baby. He had been a factory worker and, like Hamda, had fled from Menagh to Aleppo and then to Azaz. That was eight months ago. It was only a matter of time before the war found them again, he said. “We will not go out [to Turkey],” he said. “I am going to die here in my country. We expect Azaz to be attacked soon.”

Ahmet was right. Regime aircraft attacked only two days later. Some of the Syrians displaced by the fighting in Aleppo died in the Aug. 15 bombing, Azaz residents told journalists who visited after the attack. The war had once again come to them. Though regime forces had been driven from the land, they could still reach anywhere in the country from the air.

The bombing prompted a reassessment of what is meant for Syrians to be free of the Assad regime. Aleppo province had enjoyed as much of that freedom as anywhere in Syria. They had even begun the first attempts to set up civil courts and try to from political parties.

In one school that was turned into a jail, a rebel named Abu Hatim held 250 prisoners — of whom 60% were shabiha, 20% secret service or police, 10% soldiers and 10% civilians.

Abu Hatim recently helped establish a court where they would try the prisoners. “It will be an open court for everyone to see,” he said, adding that the court would have five or six judges.

He ordered his men to bring in Ahmet Aswat 35, a captured shabiha militiaman. Interviewed in Abu Hatim's presence, Aswat claimed that he had already contacted a lawyer who would defend him in court. “A lot of things happened, including the raping of women,” he said.

When his trial would begin no one could predict. The constant bombings, such as the one in Azaz, pushed back the opposition’s ability to concentrate on civil institutions such as courts. As the semi-freedom seen in Aleppo province proves, the Syrian opposition has already managed great gains, largely unaided. Yet the bombings and shelling continue to hinder them.

“Shelling here, shelling there,” Haji, the activist from Marea, said. “We have no time for [creating civil institutions].” The bombings scare people and make them think that the regime will return. Some refuse to participate in forming new institutions or political parties, more people flee to Turkey when there are fresh attacks. “This affects our work,” Yasser said of the efforts to form new institutions free of the regime’s influence.

Despite its severity, a rebel commander said that the bombing in Azaz would not change rebel tactics. All opposition forces could do was continue in the same way, he said.

Justin Vela is an Istanbul-based journalist whose work has appeared in The Independent, The Wall Street Journal, The Washington Post and The Atlantic. Visit his blog here.. Follow him on Twitter: @justinvela