US Can Deter and Contain Iran, Brzezinski Says

Zbigniew Brzezinski says the United States has “no implicit obligation to follow like a stupid mule” an Israeli strike on Iranian nuclear sites and that a US or an Israeli attack on the Islamic Republic would be “the worst option” should negotiations fail, Barbara Slavin writes for Al-Monitor. 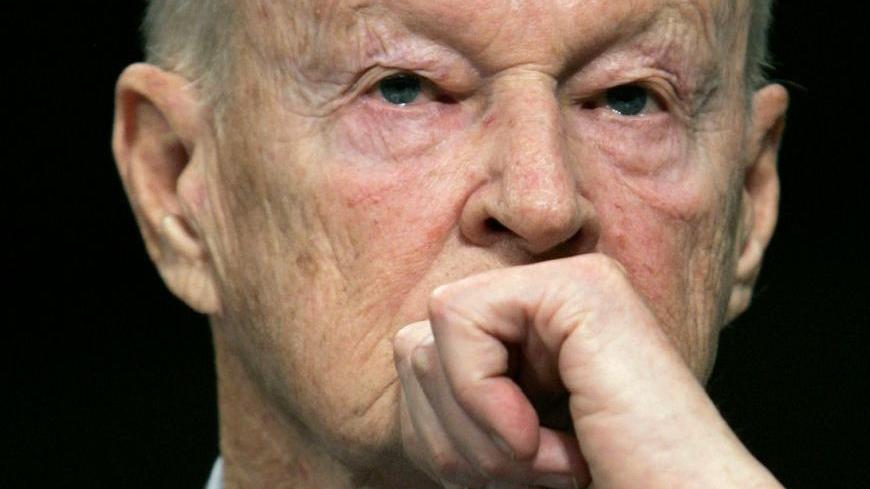 Former White House national security adviser Zbigniew Brzezinski said Monday [Nov. 26] that the United States has “no implicit obligation to follow like a stupid mule” an Israeli strike on Iranian nuclear sites and that a US or an Israeli attack on the Islamic Republic would be “the worst option” should negotiations fail.

It’s no secret that Brzezinski, who served President Jimmy Carter during the 1978-79 Iranian revolution and the subsequent US hostage crisis, opposes war with Iran. However, on Monday he fleshed out his arguments in favor of what amounts to a containment strategy as the “least bad” alternative in the event that Iran develops a nuclear weapon.

During the recently concluded presidential election campaign, both President Barack Obama and his losing challenger Mitt Romney insisted that containment of Iran was not an option and that they were prepared to use military force to prevent Iran from crossing the nuclear weapons threshold.

However, Brzezinski said that the problem of Iran’s advancing nuclear program pales in comparison to the consequences of an attack, which he called “an act of utter irresponsibility and potential immorality” given the civilian casualties that would likely ensue.

Striking Iran would produce a wider crisis that would set the region “aflame” and harm US interests from Afghanistan through Iraq and Syria, he said. It would also generate “widespread, long-lasting hatred” for the US among the Iranian people, he added.

While the veteran national security strategist was initially reluctant to use the word “containment” to describe potential policy toward Iran, he conceded under questioning from Al-Monitor that “something modeled on it if not identical” to the strategy the US pursued with the old Soviet Union, China and even North Korea was what he had in mind.

Speaking to an audience near Capitol Hill at an event organized by the Arms Control Association and the National Iranian American Council, Brzezinski said such a policy toward Iran would consist of “painful but not strangulating sanctions” shaped in such a way that they would assist forces seeking eventual democratic change in Iran.

He said sanctions should be combined with an “explicit security guarantee” to countries in the region, including Israel, that are friendly to the United States – much as the US protected Europe from the Soviets and is still deterring North Korea from using its nuclear weapons against South Korea and Japan.

Brzezinski said he was still hopeful that a diplomatic solution can be reached with Iran and suggested that a private US-Iran channel should be used in parallel to current talks between Iran and the five permanent members of the UN Security Council plus Germany, which are expected to resume soon. US officials have suggested that they would welcome such a channel and would be willing to talk about more than the Iranian nuclear program. But it remains unclear whether the Iranian government will be willing to meet in secret and how flexible either side will be. Trust between the US and Iran is lacking and previous attempts to improve the atmosphere through confidence building measures have foundered in part because of domestic politics in both countries.

If no solution is found, Brzezinski said Iran can be deterred and contained and those who say otherwise may not actually believe what they say. While nuclear weapons would give Iran “more influence, that doesn’t mean they [would] have a free hand, he said, or share the technology with others. As for Iran using a bomb against Israel, Brzezinski suggested that the chances for that were nil given Israel’s ample ability to retaliate. Otherwise, that would imply that “a country of 85 million people has no higher priority than an act of collective suicide,” he said.

Brzezinski, who has criticized Israeli policy toward the Palestinians as well as on Iran, said that it was very important for the US government to make sure that Israel understands that the US will not automatically join a war with Iran that Israel might initiate.

“You [Israel] are not going to making decisions for us,” he said. “The US has a right to its own national security policy.”

Barbara Slavin is Washington correspondent for Al-Monitor and a senior fellow at the Atlantic Council, where she focuses on Iran. Follow her on Twitter: @BarbaraSlavin1