Izzettin Dogan, the chairman of the Cem Foundation, a major umbrella organization for Turkish Alewites, claims “there is a systemic cleansing of Alewites people from all state institutions – including the judiciary.” 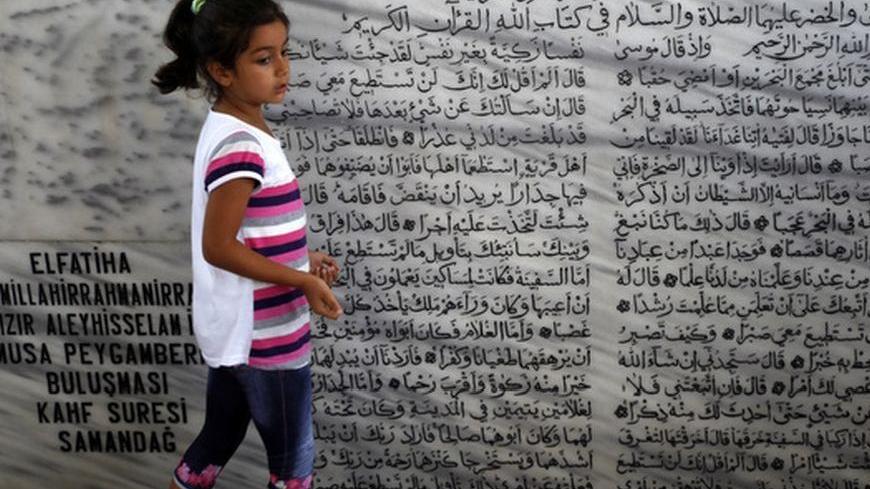 A girl stands in a tomb, a holy site for the Alawite community, in the Samandag district of Hatay province, close to the border with Syria, July 27, 2012. - REUTERS/Umit Bektas

Just holding elections is not enough unless wide respect of civil rights and pluralism principles is upheld. Unfortunately, Turkey lags behind developed societies in embracing religious tolerance and multiculturalism. The Turkish state continues to deny its people of Alawite origin the right to exercise their faith without being subjugated by the majority Sunni population.

Speaking to Al-Monitor, Izzettin Dogan, the chairman of the Cem Foundation, a major umbrella organization for Alawites in this country, compared Turkey’s Directorate of Religious Affairs to “a demon with unbelievable powers” and claimed that the head of this directorate is “Turkey’s real prime minister.”

Dogan was reacting strongly to a recent statement by the Turkish Parliament’s speaker saying, “Alawites, which is a subgroup of Islam, can not have a place of worship other than mosques or prayer halls, which are common places of worship of Islam.” Huseyin Aygun, Republican People’s Party deputy from Tunceli, filed a lawsuit against the Speaker’s office when his request to open a cemevi — a place of worship for Alevites people — in the Parliamentary compound was rejected.

“They’re trying to negate the Islamic perceptions of Alawites in Turkey,” Dogan told Al-Monitor. “And I don’t believe it’s the Sunnis of Turkey doing it, but the Saudis, and the Turkish Directorate of Religious Affairs, which embraces the Saudi version of Islam. This has been one of the serious challenges of Turkey where the state systematically imposes the culture of Arab Islam on Turkish people.”

For Dogan, being Alawite means Turkish Islam, separate from Arab Islam. As he explains, the major difference is that the former is about “rationalism” and the latter is primarily focused on “emotionalism.” And that emotional aspect of tradition, he suggests, allows radical Islam to flourish — meaning, “It’s permissible to kill and die for Allah.” Whereas for Alawites, he says, “use of force and violence, hatred and resentment” are not praised values.

As an international law professor, and a long-time leader of his Alawite community, he starts dwelling into the issue from the time that Ottoman Sultan Yavuz Sultan Selim defeated Safavid Emperor Shah Ismael in 1514 at Chalderan. “Shah Ismael built his army from the Anatolian Turks, which earned him a natural sympathy in these lands,” said Dogan. “But it was after this victory, the Ottoman Sultan understood that he lost people’s support and that he quickly needed to adapt to a new version of Islam. He conquered Egypt, and brought with him 2000 religious scholars from Al-Azhar mosque, and declared in 1517 for the first time the official sect of Ottoman Empire as being Sunni. He also proclaimed the Caliphate to the Ottomans.”

In an extensive interview with Al-Monitor, Dogan argues that to comprehend today’s challenges the key to is understand the past. Despite this strenuous historic background however, the Chairman of Cem Foundation says it’s only “since 2002 that the Islamic practice in Turkey is gradually orienting toward Arab Islam.” Dogan argues that the major difference between Sunni, Shia and Alawites is their approach to women. “While the first two considers women less than a man, Alawites see both men and women as being equal.”

Arguing that Turkey’s Sunni faith is closer to Alawite traditions, and that the Turkish women were granted the right to vote and get elected in 1934, Dogan says, “That’s what made Turkey different than the rest of the Arab countries in this region. But it is now time to admit that after almost 90 years, Turkey failed to build a social, democratic, and secular society.”

Dogan tells that the founding father, Mustafa Kemal Ataturk, wanted to establish an Islamic understanding based on “rationalism,” but that the governments that followed him could not walk in his footsteps, and his project got derailed from the day the multi-party elections were introduced in Turkey. “From day one, politicians exploited religion to win votes. They quickly discovered that people were open to religious manipulation,” he said. “But Turks were not ready to play such a demanding role for their democracy as they were not clear about what secularism meant, or what it meant that the state would stay at equal distance to all its citizens. The result is clear today. Turkey can not be defined as a secular country, but it is a Sunni democracy.”

For a democracy to be labeled as “Sunni” however runs against the very definition of what this system of state governance stands for. “I don’t know what to call it anymore,” says Dogan. “But this government makes all its policies by treating us as non-existent.” He goes on to say, “The state has no right to dictate whether a belief is legitimate, or where its followers will worship.”

As Turkey is working on a new constitution, Izzettin Dogan makes it clear that the Alawites will not accept the new preamble that defines the relationship between the state and the citizen unless it guarantees the right to worship, and puts into force an affirmative action. He says that the problem is not the written promises including today’s constitution, but the lack of an institutionalized system of checks and balances.

He reminds that in August 1997, then-Turkish president Suleyman Demirel, Prime Minister Mesut Yilmaz and his deputy Bulent Ecevit with a group of cabinet members of coalition government made a historic appearance at the remembrance of Haci Bektasi Veli, known as a principal teacher of Alawites.

“They promised the people then that the Directorate of the Religious Affairs will also allocate money for cem evleri, the houses of worship for Alevi people. They transferred nearly six trillion TL from the budget to be spent on the needs of Alawite citizens. Since AKP came to power in 2002, no one knows what happened to that promise or the money.”

Dogan told Al-Monitor that he has been serving as the leader of the Alawite community as Turkey changed five prime ministers. “All told me that they couldn’t bypass the Directorate of Religious Affairs,” he said. “The Parliament represents the people. It’s the most important institution of all. How is it possible in a democracy that the Directorate of Religious Affairs could issue a fatwa, and determine that the only worship place for people from Islamic faith is a mosque?”

Dogan said the Alawite community has lost its confidence in the state. “The ruling government started a new dialogue with Alawites, and kept us in the loop for three years, holding one meeting after another. That was called as Alawite opening,” he said. “At the end, they released the notes of these conversations in seven books, and said they described the problems of Alawites people in Turkey. One can only laugh to it.”

Sounding as if he has given up hope that Alawite people will achieve fair treatment and acceptance in their own lands, he emphasized that the climate against Alawites in Turkey is worrisome, and that it confronts Alawites with new sets of challenges.

“For the first time since 1517, Alawite faith is included in the curriculum of religious courses. While we appreciate this development as a right step forward, we’re not happy with the Erdogan government,” said Dogan. “We believe there is a systemic cleansing of Alawites people from all state institutions — including the judiciary. They are not prioritizing professionalism and knowledge any more, but they make sure to put Sunnis in all these key positions. And it is easy to do. The state recruits its personnel to all its institutions through competitive exams. I have numerous petitions in my hand, where Alawite people succeed in written exams but none can pass the oral one. This can’t be coincidence.”

Tulin Daloglu is a columnist for Al-Monitor and a foreign-policy analyst based in Ankara, Turkey. She tweets @TulinDaloglu.