Yes, Ahmadinejad Talked With Me

On Monday, the office of Mahmoud Ahmadinejad denied that the Iranian president was interviewed by Al-Monitor. "Imagine my surprise to read that," Barbara Slavin writes — as she was there. She asked him questions, he answered them and she and other journalists taped the encounter. 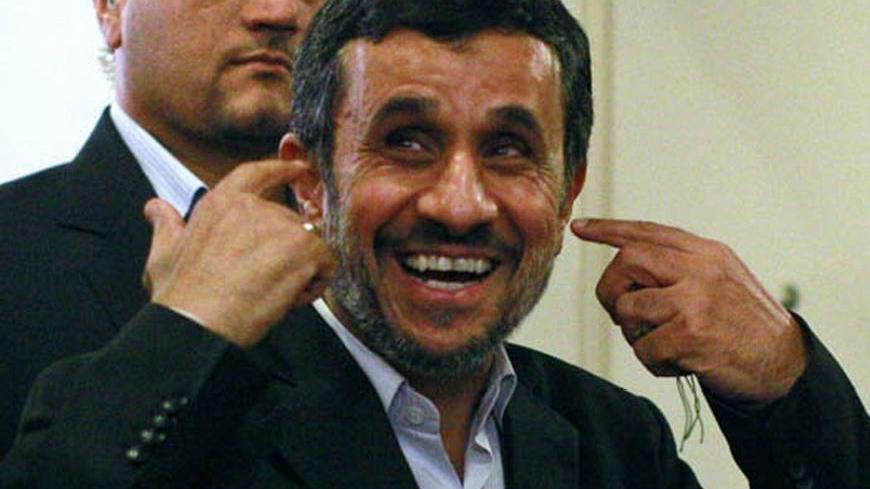 Mahmoud Ahmadinejad seemed pleased to see me last week when I met him in New York along with six other Americans who have written books on Iran.

Each of us had a chance to question the Iranian president for several minutes and I began by reminding him that I was the first US newspaper reporter to interview him after he was elected president in 2005.
So you can imagine my surprise to read that the president’s office on Monday denied “reports that President Mahmoud Ahmadinead had given interview to the US ElMonitor [sic] website.” (To be specific, the president's office described my article that quoted him as "unrealistic analyses with no credit" and "a sheer lie.")
Perhaps the Iranian president did not know that I was now Washington correspondent for Al-Monitor. But that seems unlikely since I had just visited Iran to cover the recent Non-Aligned summit in Tehran for Al-Monitor and Ahmadinejad made reference to my visit in answering one of my questions last week. Or there might have been confusion about the nature of the event, which was billed as a conversation with Iran experts rather than a traditional interview.
Of course, distinguishing fact from fiction can be a problem for some in the Iranian media, too. On Sunday, an Iranian news outlet — Fars News Agency — apologized to readers for running an item that quoted a story from The Onion. Not realizing that this is a satirical publication, Fars reported on a fake Gallup poll that found that white American voters from rural areas prefer Ahmadinejad to US President Barack Obama. (My colleague Eskandar Sadeghi-Boroujerdi was first to point out the Onion story in Fars.)
The presidential statement denying the “interview” did not single out any particular comment attributed to the president as incorrect and merely insisted that the encounter — witnessed by more than a dozen people and taped by several of them including me — had never taken place.
What specifically irked the Iranian president or his aides?
Perhaps there was an incredulous domestic response to his assertion — in response to my question about whether Iranians are better off now than when he became president — that “certainly people’s conditions are better than 7½ years ago.”
After all, as I pointed out to Ahmadinejad, inflation and unemployment are rising and the Iranian currency, the rial, is worth only a fraction of what it was a year ago.
Ahmadinejad’s response: “Those conditions may be prevalent in the US as well” and the “financial and economic problems [are] much bigger in Europe.”
Several Iranian media outlets have criticized Ahmadinejad for attending the annual UN General Assembly meeting in New York every year that he has been president and for taking a delegation of more than 100 people to stay in a deluxe New York City hotel at a time when average Iranians are struggling to make ends meet.
“His participation at the UN every year involves huge financial costs,” noted the newspaper Mardom  Salari on Sept. 24, according to a translation by Mideast Mirror. “Who is really accountable for the cost incurred in these repeated visits?”
The kerfuffle with Ahmadinejad’s office was not unusual for Iran. The media there often pounces on articles about Iran in the foreign press and uses them to score political points in Iran’s fractious internal politics.
In 2005, Mehdi Hashemi, a son of former Iranian President Akhbar Hashemi Rafsanjani, denied that he had given me an interview after I quoted him in USA Today as saying that his father, if re-elected, would turn the office of Supreme Leader into a ceremonial post akin to that of the King of England. Factions opposed to Rafsanjani cited the comment, which may have undermined Rafsanjani’s electoral chances and helped Ahmadinejad — a relative unknown at the time — win.
Barbara  Slavin is Washington correspondent for Al-Monitor and a senior fellow at the Atlantic Council where she focuses on Iran. Follow her on Twitter:  @BarbaraSlavin1.