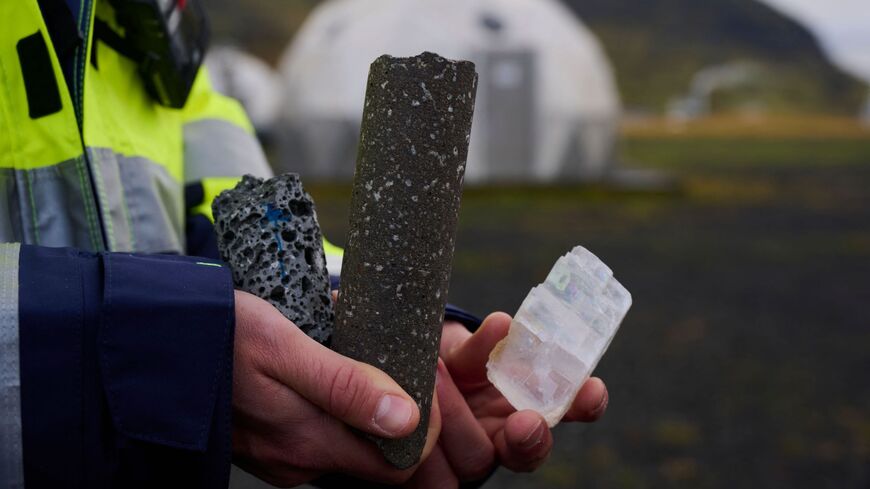 Thomas Ratouis, at Carbfix at the Hellisheidi power plant near Reykjavik shows rocks into which CO2 is mineralized during an interview with AFP on Oct. 11, 2021. - HALLDOR KOLBEINS/AFP via Getty Images

Several entities in the United Arab Emirates announced a decarbonization initiative that will utilize rocks on Tuesday.

The partnership was established between the state-owned Abu Dhabi National Oil Company (ADNOC), the Fujairah Natural Resources Corporation, the UAE sovereign wealth fund’s renewable energy company Masdar and the London-based decarbonization company 44.01. Together, they will remove carbon dioxide from the atmosphere by “mineralizing” it into rock formations in the Emirate of Fujairah, according to a press release.

What it means: Carbon capture refers to the removal of carbon dioxide from the atmosphere. The captured carbon is typically stored deep underground in oil and gas reservoirs, coal beds and aquifers.

In carbon mineralization, carbon dioxide becomes a solid material. The process occurs naturally as some rocks store carbon dioxide when they are exposed to it. However, carbon can also be artificially injected into rock formations as well, according to the US Geological Survey (USGS).

In the UAE project, the carbon will be captured from the air, dissolved in seawater and then injected into rock formations underground, according to the press release.

Why it matters: Carbon mineralization has advantages over other types of carbon storage. Storing carbon underground leads to the gas dissolving into water. However, when the carbon forms new minerals within rocks, it cannot escape back to the atmosphere, according to USGS.

The Abu Dhabi National Oil Company has been focusing on decarbonization efforts for some time. The company announced a $15 billion investment in carbon capture, carbon absorption and other green technology earlier this month. Last year, ADNOC announced a partnership with TotalEnergies on carbon capture.

The company’s interest in decarbonization is part of the UAE’s wider effort to gradually reduce dependence on oil and gas.