Heba Saadia has been selected as the Palestine's first referee to officiate the FIFA Women's World Cup 2023 matches. 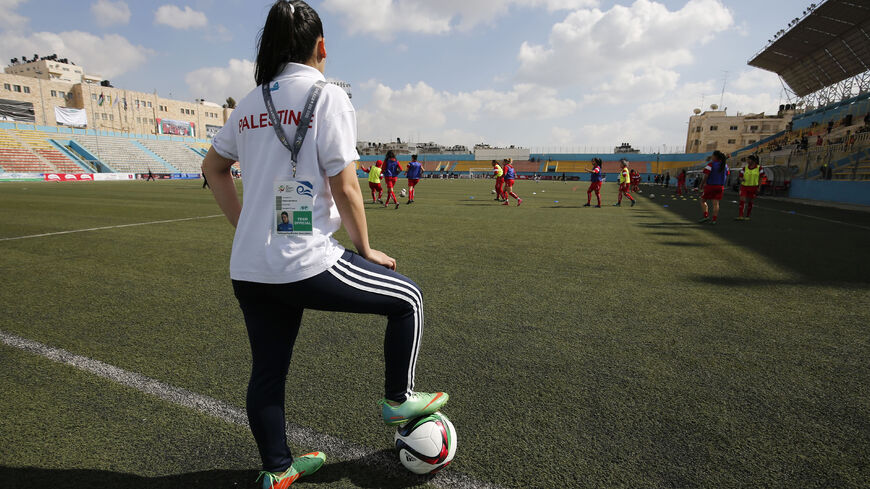 RAMALLAH, West Bank — Palestinian international soccer referee Heba Saadia has begun preparations to participate in the Women's World Cup, which will be held in Australia and New Zealand this summer, after having been officially selected by the International Federation of Football Association (FIFA) to officiate the matches.

Saadia is the first Palestinian and Arab referee to participate in this tournament, marking another achievement in her career, as she was previously selected as part of the referee team for the 2022 AFC Cup matches in Vietnam, in addition to refereeing many local, continental and international women's soccer matches, such as the Women's Asian Cup matches held in India last February.

In isolation and away from the media, Saadia is preparing for this year’s major soccer event. Al-Monitor tried to contact her, but she is currently not speaking to the media under FIFA instructions.

In a February 2022 interview with the Palestine TV Sports and Youth channel, Saadia recounted her journey with soccer refereeing, which she said began at the Palestinian Yarmouk refugee camp where she was born to Palestinian parents; she had always been fond of all kinds of sports and specialized in physical education while at university in Damascus.

Saadia said that she got into soccer refereeing by chance. “I was watching a group of referees train and noticed they had no women among them. When I asked them about it, they suggested I join them. So I did,” she added.

Saadia then joined the soccer referees committee in Syria, affiliated with the Syrian Football Association, and began her career as a fourth official — a referee who assists the main referees during matches.

“She is also one of the first Arab female referees to participate in an official tournament at this level, and she has proven the ability of Palestinian women to excel in any field,” he said.

“Saadia was selected after a lot of blood and tears on her end. She managed to gain great experience in the field of physical fitness and officiating soccer matches, in coordination with the PFA. She is a role model for Palestinian women who aspire to achieve success and greatness,” Abu Hilal noted.

He pointed out that the PFA nominated Saadia to obtain the international referee badge from FIFA, and followed up on the international tests she underwent prior to her selection in 2016, in coordination with several Arab federations.

Over the past few years, the PFA has paid great attention to developing and expanding women's participation in sports arbitration, specifically soccer, and tried to attract many young women to this field.

Following in Saadia’s footsteps, Yasmine Nairoukh from Hebron will be obtaining her international referee badge in early 2023.

“Our plan is to increase the number of women in sports arbitration at the local level and then nominate distinguished ones for the international level. We are currently working with 15 female referees and plan to attract more women by working with universities and sports clubs, and providing them with all the requirements to raise their level and experience,” Abu Hilal said.

Michel Hanania, lecturer and referee coach at the PFA and the Asian Football Confederation (AFC), has closely followed Saadia’s training and provided the AFC and FIFA with monthly reports to evaluate her performance.

He told Al-Monitor that Saadia has made a historic achievement for Palestinian soccer, but it was not a coincidence or a stroke of luck; this required a lot of effort by Saadia personally and great attention from the PFA.

“Saadia’s achievement is due to several factors, the first of which is her great talent, and acquiring the tools to hone her talent and develop it, in addition to having the opportunity to strive and prove her worth. Her experience from Syria to Malaysia and then Sweden played a major part,” Hanania explained.

“As part of Saadia’s preparations, we communicated with the Malaysian and Swedish soccer associations in order to give her the opportunity to officiate matches in the two countries. We also worked to develop her fitness level and addressed all the observations submitted by FIFA, so she is able to obtain her international badge and officiate in the Women’s World Cup,” he added.

Hanania stressed that selecting Saadia for this important international event, as well as Nairoukh’s international badge, will reflect positively on Palestinian female referees. He said that Nairoukh will officiate her first continental match after receiving the international referee badge in January, which is the West Asian Football Federation U-16 Girls Championship in Aqaba.