Turkey's foreign minister says Ankara wants to cooperate with the Syrian regime but will not let that get in the way of its fight against terrorism. 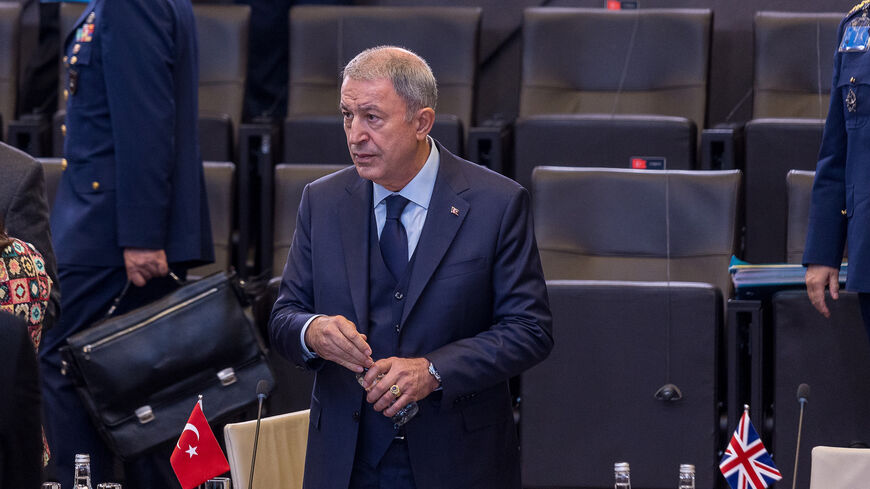 Turkish Defense Minister Hulusi Akar is seen at the start of a meeting at the NATO headquarters on Oct. 13, 2022, in Brussels, Belgium. - Omar Havana/ Getty Images

After a surprise meeting between the defense chiefs of Turkey and Syria in Moscow, Ankara indicated Thursday that Turkish-Syrian talks would continue in 2023 with a focus on joint efforts to combat terror groups and the return of Syrian refugees to their country.

The next step would be a meeting between foreign ministers, Turkish Foreign Minister Mevlut Cavusoglu told journalists at a year-end presser in Ankara. He said that a meeting date is not yet set, though sources in Ankara say it is to take place early in 2023.

Cavusoglu steered clear of any speculation about whether a meeting between President Recep Tayyip Erdogan and Syrian President Bashar al-Assad was in the cards. After making several overtures to Damascus in the second half of 2022, Erdogan announced in mid-December that he had proposed to his Russian counterpart Vladimir Putin to establish a trilateral mechanism with Russia and Syria and to hold a leaders meeting on security and migration. “First, our intelligence agencies, then defense ministers and then foreign ministers could meet. After their meetings, we as the leaders may come together,” Erdogan had told a group of journalists.

Wednesday’s defense ministers meeting between Hulusi Akar and Ali Mahmoud Abbas, hosted by their Russian counterpart Sergei Shoigu, is the first ministerial-level engagement between the two countries in 11 years. The ministers were accompanied by their intelligence chiefs. In identical statements, the Turkish, Syrian and Russian defense ministries said that the sides tackled three issues: the Syrian crisis, the return of the Syrian refugees and joint efforts to combat terrorist organizations in Syria.

“It was a useful meeting," Cavusoglu said. "We think this engagement is important in terms of reconciliation between the Syrian regime and the opposition on a road map for a political solution.” He added that he will also meet with Russian Foreign Minister Sergey Lavrov soon.

Cavusoglu and Akar both repeatedly underlined that the military operations in Syria were intended to secure Turkey’s border, not to target Syria’s territorial integrity. “We have told our interlocutors that our sole aim is the fight against terrorism. We have no other purpose,” Akar said in Moscow before heading to Ankara.

Cavusoglu commented on the outlawed Kurdistan Workers Party (PKK) and its Syrian offshoot the Kurdish People’s Protection Units (YPG), saying, “The PKK/YPG is a threat for us, but they pose even more of a threat to Damascus because of their separatist agenda.” He went on, “The [Syrian] regime also sees the threat very well, but we have not had any concrete cooperation in the fight against terrorism due to their conflicts with us.”

Following a blast in central Istanbul that killed six people last month, Ankara has launched multiple airstrikes against Kurdish militant groups’ bases across northern Syria and Iraq, which it said were being used to commit "terrorist" attacks on Turkish soil. Despite international resistance, Ankara has also kept the option open of a fresh ground offensive to establish a “security line” that Erdogan said would both protect Turkey’s borders and ultimately “ensure the territorial integrity of Syria and Iraq.”

Asked specifically about a possible Turkish land incursion, Cavusoglu said that in case of threat, a ground or aerial military campaign “could still be on the agenda” in parallel to the rapprochement process with the Syrian regime.

Veteran journalist and political analyst Murat Yetkin interpreted the statement as the ground offensive option being suspended, at least for the time being. “However, should there be a PKK/YPG attack, then it would come back to the table,” he wrote in the YetkinReport.

Yetkin said that one of the critical issues for Erdogan before the elections was the return of the Syrians under temporary protection in Turkey. Turkey hosts at least 3.7 million Syrian refugees, the world's largest refugee population. Their presence has become a point of vulnerability for Erdogan’s government, with the public sentiment turning against them as Turkey's economic woes and unemployment mounted.

“Erdogan wants to see a move here, no matter how symbolic,” he said. “Assad, on the other hand, is reluctant to make any goodwill gestures to Erdogan before the elections in Turkey.”