The former head of the Salafist Nour Party instructed listeners not to watch World Cup matches. 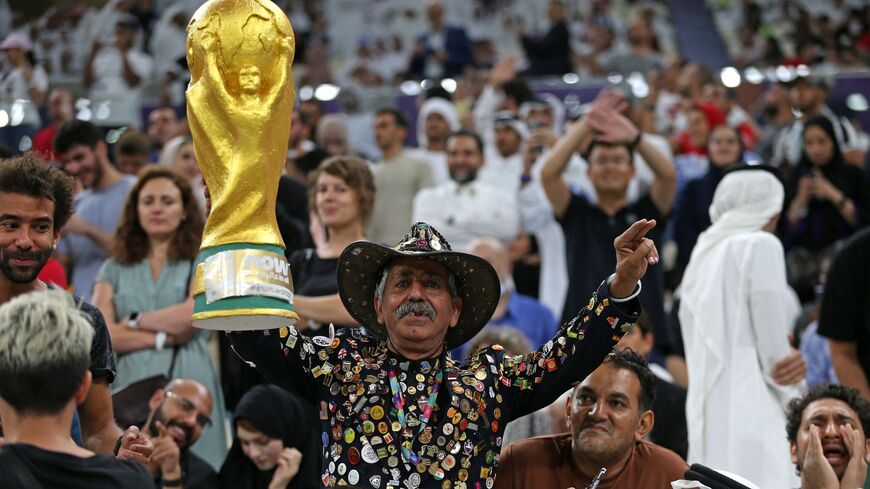 A fan carries a replica of the World Cup Trophy during the Lusail Super Cup football match between Saudi Arabia's Al-Hilal and Egypt's Zamalek at the Lusail Stadium on the outskirts of Qatar's capital Doha on Sept. 9, 2022. - MUSTAFA ABUMUNES/AFP via Getty Images

CAIRO — A Salafist sheikh in Egypt has banned watching soccer matches as the FIFA World Cup Qatar 2022 is in full swing.

The former head of the Salafist Nour Party, Younes Makhyoun, said in a Nov. 27 Facebook video that “watching the World Cup matches is a waste of time, and Muslims will be held accountable for the hours they wasted on the Day of Judgment.”

Makhyoun asked, “What is the benefit of watching soccer games?” He criticized soccer fans for idolizing players such as Lionel Messi and added, “We do not take pride in an Arab country that organized the World Cup and spent billions of dollars on the event. We hope that other fields would be a source of pride for us, like the manufacturing of a nuclear bomb, as Iran has been doing.”

Reactions to Makhyoun’s remarks have been split. While some Egyptians agreed that watching soccer is a waste of time, others argued that his statements are extremist and an effort to harass people and deprive them of their right to recreation, which is permissible under Sharia.

Egypt's Dar al-Ifta, the official body for issuing religious fatwas, responded with a message that watching soccer is permissible and legitimate in Islam.

Khaled Omran, secretary of fatwa affairs at Dar al-Ifta, commented to broadcaster Sada el-Balad Nov. 27, “Sport is mentioned in Islam. The prophet used to practice sports with his companions and his wife Aisha.”

He added, “Soccer is a sport that strengthens the body and mind and contributes to learning about cultures.”

In a Nov. 2 Facebook video, Yasser Borhami, the deputy head of the Salafist Dawa Party, commented on the World Cup, criticizing fans who are fanatics or grieve their teams' losses. He called their excitement a revival of “ignorant tendencies” from the pre-Islamic era.

Amna Naseer, a professor of faith and philosophy at Al-Azhar University, considers watching soccer matches permissible entertainment that stimulates the mind and that there is no Islamic objection to it. Naseer told Al-Monitor that such bans are a form of extremism.

“There is no objection to a Muslim country hosting such a tournament, as [soccer] has become the language of the times,” she added.