Three officers were killed and five others injured as police forces hunted a man suspected of killing a police colonel last week. 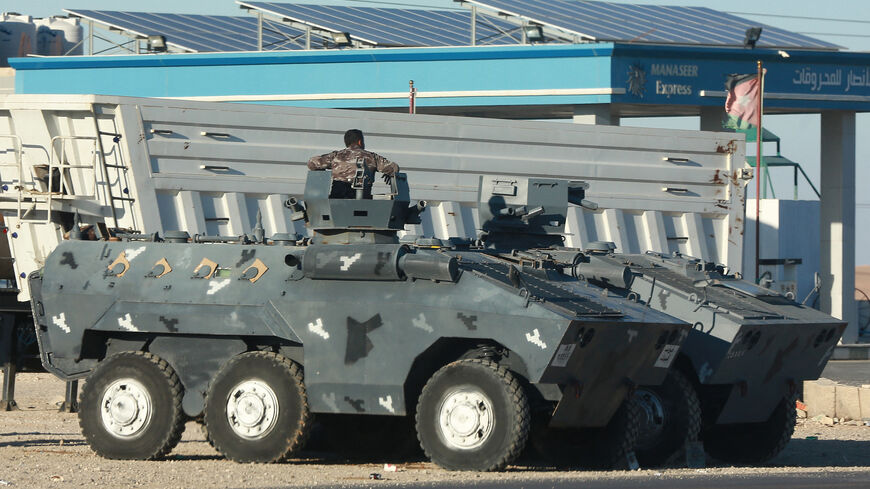 Jordanian security forces deploy in armored vehicles in the southern city of Maan, south of the capital Amman, on Dec. 16, 2022, hours after a senior police officer was shot dead in riots during a strike against rising fuel prices in the area. - KHALIL MAZRAAWI/AFP via Getty Images

Jordanian police said on Monday that three officers and a suspect were killed in a shootout in the southern city of Maan as protests spread across Jordan over fuel prices.

The shootout, which led to the injury of five additional officers, took place during a raid as police searched for a man suspected of killing another officer last week.

The suspect was killed on the spot and nine others were arrested on suspicion of belonging to an Islamic extremist group with "takfiri ideology," the Associated Press reported.

What it matters: This is the second such incident in less than a week. A senior police commander was shot and killed last Thursday. In a statement, the Public Security Directorate identified the officer killed as Col. Abdul Razzaq al-Dalabeh.

The directorate's statement read, "We will be dealing with the provisions of the law, using appropriate force with anyone who engages in riots and vandalism, wherever they may be, and will not allow criminals and vandals to take advantage of the circumstances to risk lives or intimidate citizens."

Know more: Political unrest continues to rock the kingdom, most recently with a strike by truck drivers over increasing fuel prices. Although the Jordanian government and parliament agreed on a few steps to soothe public anger, it failed to appease the protesters. Among the state's moves were “raising freight fares, disbursing financial support to the transport sector and abstaining from raising the price of kerosene during the winter season,” Al-Monitor reported last week.

At the beginning of 2022, the government started raising the prices of diesel, gasoline and kerosene, which poor Jordanians rely on for heating. Although a World Bank report projected the Jordanian economy to grow by 2.1% in 2022, it also warned that “rising commodity prices, supply bottlenecks and the impact of the war in Ukraine” all pose major risks to the country’s economic outlook.