Iranian dissident who disappeared in Turkey resurfaces in Evin prison

Mohammad Bagher Moradi who took refuge in Turkey has ended up in Iran's notorious Evin prison, five months after he went missing in Ankara, his lawyer told Al-Monitor. 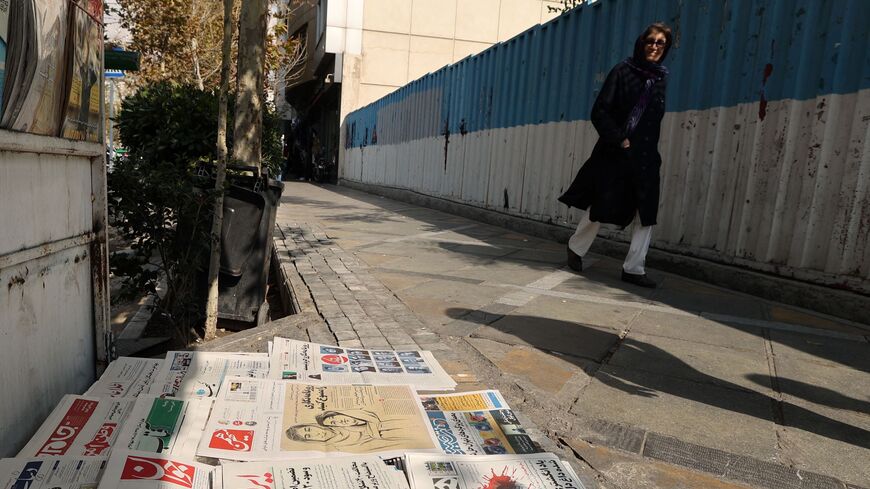 A woman walks past a kiosk in the Iranian capital Tehran on Oct. 30, 2022, displaying copies of the Hammihan newspaper. - ATTA KENARE/AFP via Getty Images

A dissident Iranian journalist who went missing in Turkey in May has resurfaced in the hands of the Iranian authorities and was placed in the notorious Evin prison in Tehran, according to his lawyer in Turkey.

Mohammad Bagher Moradi contacted his family in November for the first time since his disappearance in Ankara, saying he was in custody in Tehran, and made a second call in early December to say he was put in Evin Prison, attorney Salih Efe told Al-Monitor.

According to Efe, the 34-year-old Moradi was abducted by unidentified people at around 10 p.m., local time, on May 30 while on his way home in the Turkish capital. The lawyer cited witnesses as saying that two men clad in black left Moradi’s car on a street near his home the following morning.

Moradi had fled from Iran to neighboring Turkey in 2014 along with his father after he was sentenced to five years in prison for collusion against the state of Iran.

The family filed a missing person report with the Ankara police in June after Moradi's disappearance. They followed up with a criminal complaint to the prosecutor’s office about a suspected abduction.

The complaint, a copy of which was seen by Al-Monitor, asked for the investigation of a person who had tried to recruit Moradi as an informant, introducing himself with a non-Turkish name but claiming to be a Turkish intelligence operative. Moradi recounted the incident on the social chat platform Clubhouse and said he had been threatened by the person after turning down the offer, according to the complaint.

Despite the family’s efforts, Moradi’s fate had remained unknown for months.

In a meeting with his lawyers in Evin Prison, Moradi said he had been held in Turkey before being handed over to Iran in November, according to Efe.

The journalist’s father, Mohsen Moradi, had told the Turkish media in June he believed that Iranian intelligence agents had abducted his son, saying that Iranian operatives had been after him for some time.

In mid-November, members of the Islamic Revolutionary Guard Corps questioned Mohsen Moradi about his son’s activities in Turkey and pressed him to advise his son to make a confession on television, according to sources quoted by Radio Free Europe.

The journalist was officially acknowledged as an asylum seeker at the time of his abduction. The Turkish authorities had granted him conditional refugee status on April 21, meaning he was allowed to reside in Turkey until his resettlement to a third country.

Efe is planning legal action against the Turkish authorities on the basis of Moradi’s account to his lawyers in Iran. “I will file a criminal complaint against relevant officials and the government for unlawful actions against a person who was under the protection of the Turkish government and the UN High Commissioner for Refugees office in Turkey,” he said.

“Such actions cannot be legitimized by the government nor accepted by anyone in the world who cares about human rights, human dignity and refugee rights.”

“Turkey, I think, can no longer be considered a safe country for Iranian refugees," he added.

Turkish officials have kept mum on the issue. A written parliamentary question about Moradi’s fate, addressed to the interior minister and filed by an opposition lawmaker in June, has remained unanswered.