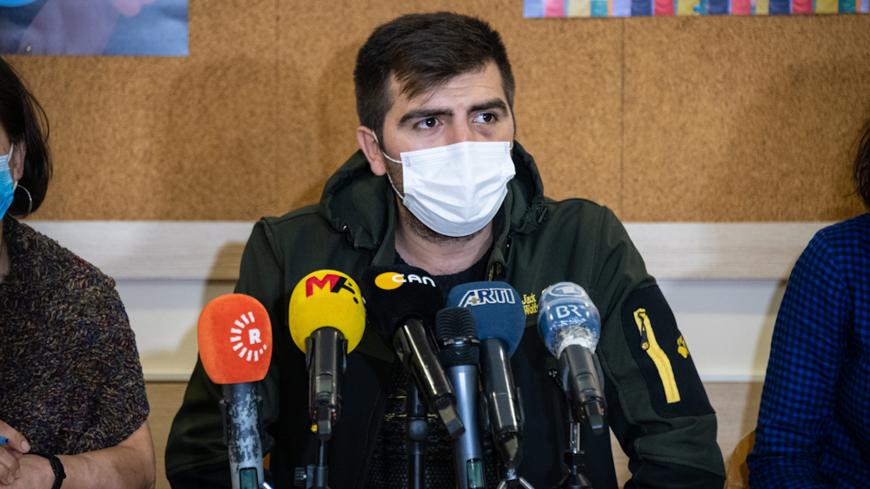 Gokhan Gunes speaks to the press upon returning home six days after his alleged abduction in Istanbul, Jan. 26, 2021. - Diego Cupolo

ISTANBUL — Six days after he went missing, a Turkish worker returned to his family Tuesday morning claiming he had been abducted and tortured by unidentified state agents in a forced disappearance.

Speaking with a bruise under his left eye, Gokhan Gunes, an electrician of Alevi descent with leftist political leanings, described the six days he was missing during a press conference at the Istanbul branch of Turkey’s Human Rights Association Tuesday.

“To make me submit, they gave me an electric shock,” Gunes said. “When I woke up again, my head was covered in a black bag. … I was taken into a building, given more electric shocks and beaten.”

He added he was doused in cold water and held in a place called “the grave” by men who called themselves “the invisibles.” Gunes claimed his abductors were trying to recruit him as an informant on the Socialist Party of the Oppressed, a Marxist group allied with the pro-Kurdish People's Democratic Party.

Gunes’ aunt, Zubeyde Gunes, told Al-Monitor police had repeatedly approached him for informant work in the past. Turkey’s Interior Ministry did not respond to requests for comment and no official statements have been released regarding Gunes’ accusations.

"The purpose of these attacks is because of the identity I have carried,” Gunes told reporters Tuesday. “There have been many attacks on people with socialist identities. It emerged as a policy in the 1990s. These practices will continue in the days to come.”

The Turkish government blames followers of Fethullah Gulen, a US-based Turkish cleric, for orchestrating the coup attempt and continues to detain suspected sympathizers on a weekly basis. Amid the ongoing post-coup crackdown, hundreds of civil society members, public workers, journalists and opposition party supporters have also been taken into custody on terror-related charges.

“The recent cases of suspected and confirmed forced disappearance are very concerning and signal a return to a particularly serious form of human rights violation — one that the United Nations describes as a crime against humanity,” Milena Buyum, a Turkey campaigner for Amnesty International, told Al-Monitor.

Buyum added, “Its resurgence in the last few years … is one of the most serious issues in Turkey, currently.”

Gunes said he was apprehended on Jan. 20 by four men when he got off a bus on his way to work in the Istanbul district of Kayasehir. The scene was captured by a nearby security camera. Gunes said he was forced into a car in which he was transported for about 30 minutes before being placed in a second car.

An hour later, he was brought into a building where he said a loudspeaker played music 24 hours a day along with racist content. In the undisclosed location, Gunes alleged he was beaten and subjected to torture for six days.

Gunes’ family staged daily protests, at times with opposition party members, in front of Istanbul’s Caglayan courthouse in an effort raise awareness and learn his whereabouts. The hashtag #GökhanGüneşNerede (Where is Gokhan Gunes?) trended on social media.

As his case attracted increasing media attention, Gunes was dropped off blindfolded Tuesday morning in the Basaksehir district of Istanbul, from where he took a taxi to his family home.

Sezin Ucar, a lawyer representing Gunes, said a legal team would apply for his alleged abduction to be reviewed by Turkey’s Constitutional Court and the European Court of Human rights.

“Our initial step will be starting legal procedures to find the assailants,” Ucar told Al-Monitor. “In the meantime, we will continue collecting documents and images to find evidence leading to perpetrators.”

Ucar said she had previously filed a complaint with the Istanbul prosecutor’s office, which she said has yet to open an investigation into Gunes’ case.

Gunes’ mother, Nazife Gunes, also spoke at the press event Tuesday. Holding back tears, she thanked those who helped raise awareness of her son’s apparent abduction, including the Saturday Mothers, a group that began organizing silent protests in the 1990s demanding to know the whereabouts of missing relatives.

“May other children not disappear,” Nafize Gunes told reporters Tuesday.

by Murielle KASPRZAK and Joseph SCHMID | AFP | May 26, 2022
END_OF_DOCUMENT_TOKEN_TO_BE_REPLACED