Human rights experts consider the involuntary disappearance of opposition activists at the hands of the state to be "sheer lawlessness." 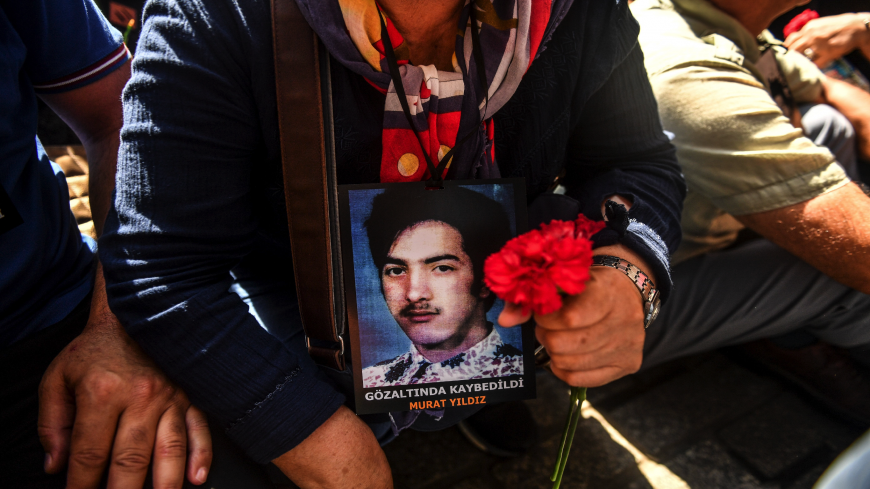 A member of Saturday Mothers holds a carnation and a picture of a disappeared person during a gathering on a side street that leads to Istiklal Street as part of a march to Galatasaray Square, where they meet every week, demanding to know the fate of their missing relatives, claimed to be last seen in the hands of security forces, in central Istanbul, on Sept. 1, 2018. - BULENT KILIC/AFP via Getty Images

“I want my child, I want my child alive. Whatever they did with my child, they need to bring him back.” The tearful appeal to Turkish authorities came from Nazife Gunes, the mother of 23-year-old Gokhan Gunes, a construction worker with socialist leanings who has been missing from his Istanbul home for the past five days.

His family says Gunes was bundled into a car and whisked away to an unknown destination on Jan. 20, most likely by undercover police, after he got off a bus outside his workplace in Istanbul’s Basaksehir neighborhood.

Turkish authorities have turned a deaf ear to the Gunes family’s entreaties to find their son, even after they presented what they say is visual evidence of his abduction captured by security cameras outside the construction site run by Turev Insaat.

Gunes’ story chimes with a pattern of forced disappearances of dissidents that has emerged in the wake of the 2016 coup attempt. The bulk of the targets are alleged disciples of Fethullah Gulen, the Pennsylvania-based imam who Ankara accuses of masterminding the putsch.

Gunes’ paternal aunt, Zubeyde, told Al-Monitor her nephew had been repeatedly approached by police to become an informant on like-minded leftists from the Socialist Party of the Oppressed (ESP), a small Marxist group that is allied with the pro-Kurdish Peoples’ Democratic Party (HDP).

The HDP is the third-largest party in the 600-member Turkish parliament. Both the ESP and the HDP face unremitting legal pressure from the state with thousands of members and sympathizers currently in jail over specious terror charges.

Gunes’ family and friends, along with members of opposition parties, have been gathering daily outside the Cagalayan courthouse in Istanbul demanding knowledge of his whereabouts. Zubeyde said she was briefly detained along with 11 others on Jan. 23 during the protest.

“Instead of trying to find my nephew, the authorities are seeking to criminalize our legitimate demands for accountability, for knowledge of his whereabouts,” she said.

According to the Human Rights Association of Turkey, at least 10 individuals were abducted and threatened by security officials and pressed to become informants and later freed in the first 10 months of 2020. Zubeyde said Gunes had squarely refused to become a snitch. “He is a very honorable young socialist who believes in equality and justice. He would never bow to such pressure.”

Gunes was jailed for eight months in 2018 over a tweet condemning Turkey’s invasion of the Kurdish majority enclave of Afrin in northwestern Syria that same year. He was freed pending trial, and his first hearing was scheduled for March. He was also engaged to be married in April this year.

HDP lawmaker Omer Faruk Gergerlioglu has submitted a parliamentary motion demanding the government establish the identities of the men who are seen hauling Gunes away in the video footage. The police’s reaction so far has been to investigate those who provided the footage to the Gunes family. The government has not commented on the case.

“The degree of sheer lawlessness in policing is shocking,” said Emma Sinclair-Webb of Human Rights Watch. “The authorities have the power to arrest people and take them into custody. The place of custody has to be known and there are rules to follow.” Sinclair-Webb added, “The trouble is that not enough people are talking about it in Turkey and only very few in the parliament — none of them in the ruling coalition.”

This is certainly true when alleged members of the Gulen movement are at the receiving end.

At least 26 Gulen-linked individuals are thought to have been forcibly disappeared since the coup, allegedly by the national intelligence agency, MIT. Many of the men have since resurfaced emaciated and broken, with authorities claiming they had “found” them here and there. The men have been jailed for their alleged role in the failed coup. During their courtroom trials, several mustered the courage to speak of the brutal physical and mental torture to which they say were subjected at the black sites where they were secretly held. Their tormentors’ main purpose was to get them to reveal the names of people associated with Gulen.

Several others remain missing. They include Yusuf Bilge Tunc, a former bureaucrat who disappeared on Aug. 6, 2019. Huseyin Galip Kucukozyigit, a legal adviser who worked for President Recep Tayyip Erdogan while he was still the prime minister, has been missing since Dec. 29, 2020. “Is this another case of an extrajudicial abduction?” Gergerlioglu asked. The government has not commented on his case either.

Ali Yildiz, a Brussels-based human rights lawyer who closely monitors such cases, said, “Enforced disappearance is a crime against humanity and is a common practice in Turkey, an aspiring member of the European Union.” Yildiz bemoaned what he called the EU’s wimpy response to spiraling abuses in Turkey. “The EU should stop airing concern and use its new human rights sanction regime to hold Turkey accountable for its behavior, including enforced disappearances,” Yildiz told Al-Monitor.