French Palestinian detained in Israel to be released, deported to France

Citing his support of terror activities, Israeli authorities have decided to release Palestinian and French citizen Salah Hamouri from administrative detention, revoke his Jerusalem residency and expel him to France. 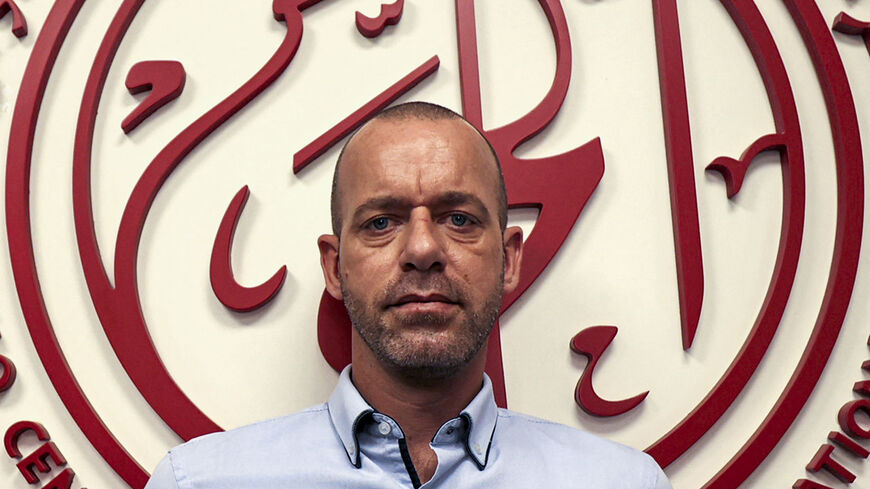 Salah Hammouri, a French Palestinian lawyer and user of one of six devices reportedly hacked with the NSO Group's Pegasus spyware, is pictured at the offices of al-Haq Centre for Applied International Law in Ramallah on Nov. 8, 2021. - ABBAS MOMANI/AFP via Getty Images

Israel’s Interior Ministry said today that the Jerusalem residency of French Palestinian lawyer Salah Hamouri has been revoked. The statement said the decision was made by Interior Minister Ayelet Shaked on the recommendation of the Shin Bet and with the consent of Justice Minister Gideon Sa’ar. The Foreign Ministry confirmed to Al-Monitor that Prime Minister Yair Lapid reviewed the issue a few months ago.

Hamouri has been held in administrative detention (without being charged and without a trial date) for about nine months. With his Jerusalem residency revoked, Hamouri will be deported to France tomorrow.

Shaked's statement read, "Hamouri is a terrorist operative, member of the Popular Front for the Liberation of Palestine and a French citizen currently being held in administrative detention. Tomorrow he is expected to be released. With his detention ended, he will be deported soon to France."

The statement also said that from an early age, Hamouri had taken advantage of his residency in Israel to advance acts of terrorism. He was detained on several occasions and imprisoned for terror-related activity including plotting to attack late Rabbi Ovadia Yosef. A few years after his imprisonment over the Yosef incident, he was released in the framework of the 2011 Gilad Shalit prisoner exchange. Israeli security agencies, it noted, believe that Hamouri continued his dangerous activities after his release.

The expulsion of Palestinians holding Jerusalem residency is rare because of international laws to prevent statelessness. Hamouri’s French citizenship enabled Shaked to take the step.

Hamouri has been imprisoned in Israel's Hadarim jail. If he decides to appeal his expulsion order, he will be kept in a detention center run by the Israeli immigration authorities until a ruling is made.

The French Foreign Ministry noted today that that it is in constant contact with Hamouri's family members and has maintained contact with the Israelis on this issue. The ministry said that President Emmanuel Macron has been engaged in efforts to see Hamouri released and allowed to live in Jerusalem with his family. Macron reportedly brought up the issue during a telephone call with Israeli Prime Minister Yair Lapid on Aug. 22.

On Oct. 10, Al-Monitor reported that Hamouri went on a hunger strike. Still, today's decision-making seems to go back much further. In December 2020, then-Interior Minister Aryeh Deri said he intended to revoke Hamouri’s residency. Shaked, who replaced Deri, initiated her move for revoking his residency last July.

According to Israeli press reports, the French consulate in Jerusalem was notified by the Interior Ministry about Hamouri’s expected release and revocation of his residency. The consulate declined to confirm to Al-Monitor that this was the case.