Expulsion of Jews from Arab countries on display at UN headquarters

For the first time, Israel features at the United Nations an exhibition of documents and pictures that tell the story of the Jews forced to leave their homes in Arab countries and Iran over the establishment of the State of Israel. 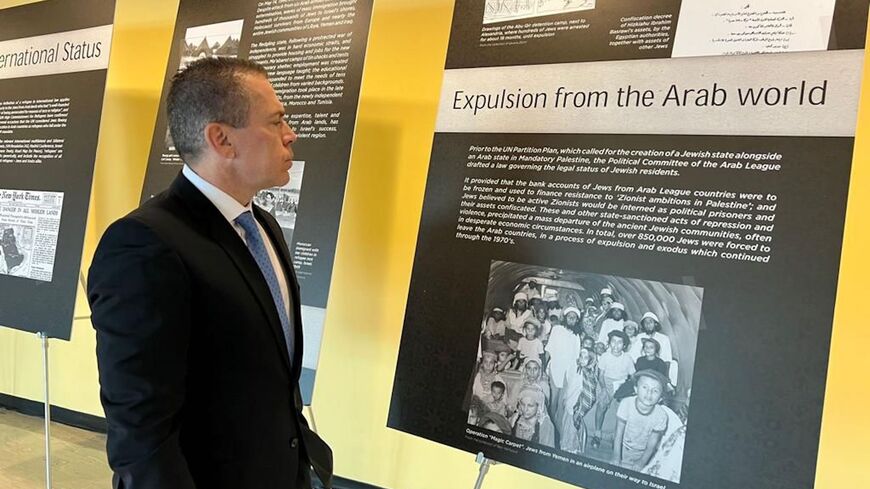 Israel's UN envoy Gilad Erdan inaugurating an exposition on the expulsion of Jews from Arab countries and Iran, UN headquarters in New York, NY, Nov. 29, 2022. - The Israeli delegation to the UN

Israel’s Ambassador to the United Nations Gilad Erdan criticized Nov. 30 the organization’s decision to commemorate the Palestinian “Nakba" in May 2023. The Arabic term Nakba — which means disaster — is used to designate the anniversary of the creation in 1948 of the State of Israel, and is annually marked in Israel, the West Bank and Gaza Strip with anti-Israel demonstrations. Erdan argued that instead of marking the Palestinian Nakba, the United Nations should commemorate the “Jewish Nakba." He was referring to the expulsion of between 750,000 and 1 million Jews from Arab countries and from Iran in the years after the November 1947 UN resolution on the partition plan and the ensuing establishment of Israel in May 1948.

Speaking at the UN podium, Erdan called to recognize the expulsion by force of Jews from Arab and Muslim countries, stating, “These Jewish communities did not revolt against the international community’s decision; they did not try to annihilate another people; their only crime was being Jews. This is the true Nakba. This is the disaster carried out against the Jewish people, and this is the disaster that this body has ignored for decades. Look at this family [picture of Jews fleeing an Arab country] that was expelled. Stop ignoring the ‘Jewish Nakba’!"

After the vote on the resolution, approved by 90 votes against 30 and with 47 abstentions, Erdan said, “What would you say if the international community celebrated the establishment of your country as a disaster? What a disgrace."

One day before the vote, Erdan inaugurated at the New York United Nations headquarters a first-of-its-kind exhibition, which documents the expulsion of the Jews. Apart from pictures from the expulsions, it also includes historical documentation and photos illustrating the lives of Jewish communities in Arab countries and in Iran.

“A day after the decision [on the partition plan], the Jews were violently and cruelly expelled from Arab countries and Iran,” said Erdan, adding that the story of the Palestinian Nakba has been told at the United Nations, while the story of the expulsion of the Jews was erased from the collective international community’s memory.

In 2014, at the initiative of Mizrahi legislators (of Middle Eastern origins), the Knesset decided to commemorate officially the expulsion of Jews from Arab countries and from Iran. The date of Nov. 30 was chosen for the official commemoration — one day after Nov. 29, the day the partition plan was adopted by the United Nations. Last year, on May 9, 2021, a memorial statue commemorating the forced departure and expulsion of Jews from Arab lands and Iran was inaugurated in Jerusalem.