Bipartisan bill targets US visas for children of Iranian officials

New legislation aims to bring pressure on Iranian officials and their family members by denying them entry to the United States. 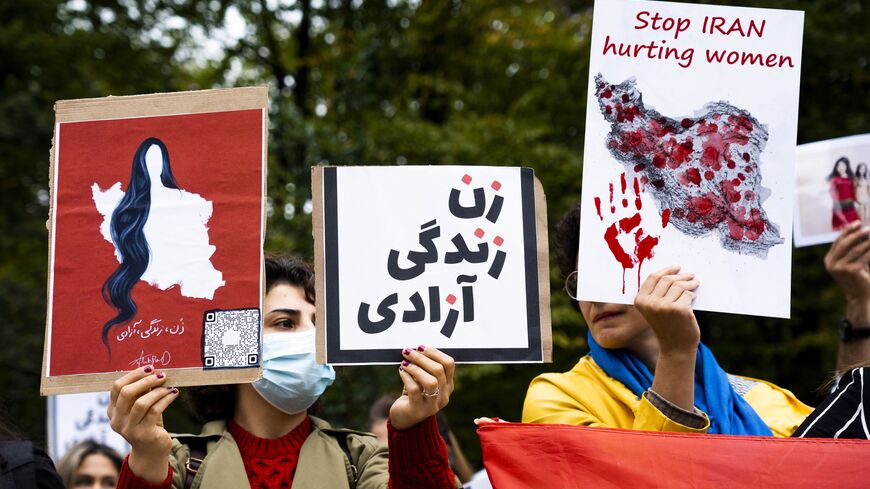 Protesters hold placards during a rally against the Iranian regime outside the House of Representatives in The Hague on Sept. 23, 2022, following the death of an Iranian woman after her arrest by the country's morality police in Tehran. - LEX VAN LIESHOUT/ANP/AFP via Getty Images

As nationwide protests in Iran enter their fourth month, a new proposal from US lawmakers would target not only Iranian officials responsible for the crackdown, but their children, Al-Monitor has learned.

It would direct the US secretary of state to conduct a review of whether a wide-ranging group of Iranian officials — including members of the Islamic Revolutionary Guard Corps (IRGC), the supreme leader’s office and law enforcement — and their immediate family members are in possession of US visas or have applied for them.

Any visas issued to individuals who meet the criteria under Section 7031(c) of the annual State Department appropriations act must be revoked, according to the bill text.

“In light of the actions of the regime it is particularly unbelievable that Iranian officials and family members are being given visas to come to the US to enjoy the very liberties their own citizens can only imagine,” Wilson told Al-Monitor.

“The REGIME Act, which I introduced along with my bipartisan colleagues, will make sure those visas — which never should have been issued —  are revoked,” he said.

The Section 7031(c) authority cited in the bill requires the secretary of state to make foreign government officials involved in a “gross violation of human rights” or “significant corruption” ineligible for entry into the United States. Those visa bans, which can be public or private, also extend to the immediate family of the targeted human rights violator or kleptocrat.

Imposing this designation on rights-abusing foreign officials, however, is harder than it sounds. A State Department official speaking not for attribution said credible evidence is required before a determination can be made that an individual has been involved in a gross violation of human rights for actions such as ordering a killing or participating in torture. Other sanctions authorities have lower legal standards and determining which tool is most appropriate for a particular target is “a very fact-intensive process,” the official said.

Biden’s State Department has designated at least three Iranian officials using this visa restriction authority. Two IRGC interrogators and their families were handed visa bans in March 2021 over their alleged involvement in the torture of political detainees, and in October the State Department designated the chief of police in Iran’s central province of Isfahan for protest-related violations.

Proponents say wider use of such visa bans could inject some hesitancy into the decision-making of Iran’s rank-and-file officials as demonstrations against the regime continue.

Critics of the legislation are likely to question whether it is fair to punish children for the sins of their parents. It’s also unclear how many Iranian officials and their offspring are even seeking entry into the United States to travel, work or study, although Wilson’s office says determining that number is one aim of the legislation.

Media reports have previously identified several relatives of Iranian officials living in the United States, including the son of Masoumeh “Mary” Ebtekar, who acted as the spokesperson for the hostage-takers during the 1979 embassy takeover.

Their names are known to the US government. A former US official said that the State Department maintains records of Iranian officials and their relatives who are traveling to the United States on temporary or more permanent visas.

“Each visa application is reviewed on a case-by-case basis and because visa records are subject to visa confidentiality under US law, no further details may be disclosed,” the spokesperson said, adding that exceptions can be made for those whose entry would be in the interest of the United States, such as fulfilling obligations under international agreements.

The Biden administration, for example, granted visas to Iranian President Ebrahim Raisi and other Iranian officials traveling to New York to attend the UN General Assembly summit in September, as is required under a 1947 pact with the United Nations. The REGIME Act also makes an exception for Iranians coming for UN business.

The new legislation arrives as the protests, which began in mid-September over the death in morality police custody of 22-year-old Mahsa Amini, have evolved into a much wider fight for political change. More than 450 people have died in the demonstrations, according to the Norway-based nongovernmental organization Iran Human Rights, and Iran has twice carried out death sentences for those jailed in connection with the protests.

The Iranian regime’s heavy-handed response to the months-long uprising has been met with several rounds of sanctions from the United States that have included designations on the morality police, security officials and employees of the state-run broadcaster.

The administration has also issued sanctions over Iran’s transfer of drones to Russia as well as its illicit oil sales abroad. In an effort to diplomatically isolate Iran, the administration led a successful push to remove it from the UN’s Commission on the Status of Women last week.

Biden officials have pledged to find new ways of raising costs on Iranian officials responsible for the protest violence. Some analysts say putting the officials’ family members on notice is one way to do that.

“Ultimately, one of the key reasons the regime in Iran does the many malign things that it does is because it can get away with it,” said Matthew Levitt, a former US counterterrorism official and now a fellow at the Washington Institute for Near East Policy.

“We need to come up with toolkits of multiple different types that put in place costs and might make them think twice.”

This story has been updated since initial publication.