Israel and Qatar have no diplomatic relations, but a special visa deal will allow thousands of Israeli soccer fans attend the world tournament. 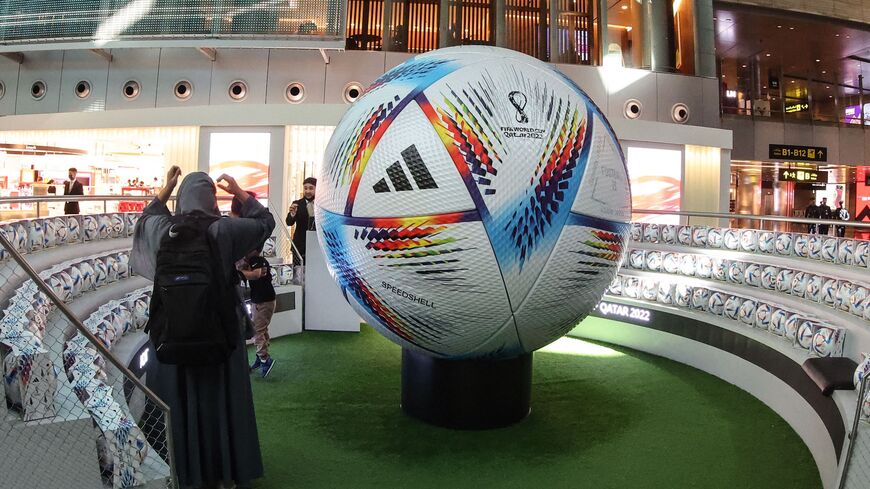 A traveler stands next to a giant soccer ball in the new central concourse building at the Hamad International Airport on Nov. 10, 2022, in the Qatari capital Doha, ahead of the Qatar 2022 FIFA World Cup football tournament. - KARIM JAAFAR/AFP via Getty Images

Israel’s Foreign Ministry announced today that Jerusalem reached a deal with FIFA, the international football association, for direct charter flights between Ben Gurion airport and Hamad international airport in Qatar during the World Cup. Israel and Qatar have no diplomatic relations and there are no direct flights between the countries.

According to a prior arrangement reached five months ago, World Cup flights from Tel Aviv were to stop over in Larnaca and then continue to Doha. Israelis seeking to attend the tournament must first buy a ticket to a game and then apply online for a Fan ID card. Card holders are granted an entry visa to Qatar, enabling them to book flights and hotel rooms. Passengers would not have to change planes and the flight crew would continue on with them. Israeli fans can also travel to Jordan, Turkey or the United Arab Emirates to catch a direct flight to Qatar.

The new deal will shorten flight times and lower the cost of air fare. It will also enable Palestinians to fly directly to Doha for the games.

The new agreement also allows Jerusalem to send a team to offer Israeli fans consular services in Doha. The Israeli office will be temporary — only for the duration of the World Cup — and does not reflect a change in diplomatic relations. Still, it will be the first time official Israeli representatives will openly operate in Qatar since ties were severed two decades ago.

Still being negotiated is the issue of cellular service. Israel has submitted a request to FIFA and the International Telecommunication Union of the United Nations for cellular access in Qatar. Jerusalem would like for Israelis to be able to use Qatar's cellular networks. So far, Qatari cellular companies have refused to cooperate with Israeli companies.

A reported 30,000 Israelis are expected to travel to Qatar in the coming days to attend the much-anticipated World Cup soccer tournament. According to reports, more than 20,000 Israelis have already bought tickets and more are expected to buy tickets this week ahead of the opening of the games on Nov. 18.

Israelis are normally not allowed to enter the country on their Israeli passports. But one of the conditions set by FIFA, the international football association, for countries that host the World Cup is to open the games to all fans.

After the 1993 Oslo Accords, Qatar hosted an Israeli trade office with two Israeli diplomats and their families staying in Doha. But when the second intifada broke out in 2000, the office was closed and relations were severed. Since then, Qatar had repeatedly said it will not follow the example of the Emirates and Bahrain in normalizing ties with Israel until the establishment of a Palestinian state. Qatar is also known for its close ties with Gaza-based Hamas and with Iran. Nevertheless, Israeli authorities have not yet issued any warnings on security concerns for Israelis traveling to Qatar for the World Cup.

The Foreign Ministry’s director Alon Ushpiz thanked FIFA and the Qatari hosts today, noting, "Today's announcement will allow Israeli citizens to freely travel to Qatar and attend matches at the World Cup. We have successfully secured all guarantees, including access to consular services for Israelis during their stay in Qatar. As the first World Cup ever hosted in the Middle East, it promises to be a celebration of football and an opportunity for Israelis to build connections and share cultural experiences with people from across our region and the wider world."