Thousands of Israeli fans flock to World Cup in Qatar

Lack of diplomatic relations did not deter Israeli soccer fans from traveling to Qatar and mixing with other fans from Lebanon, Jordan, and even Iran. 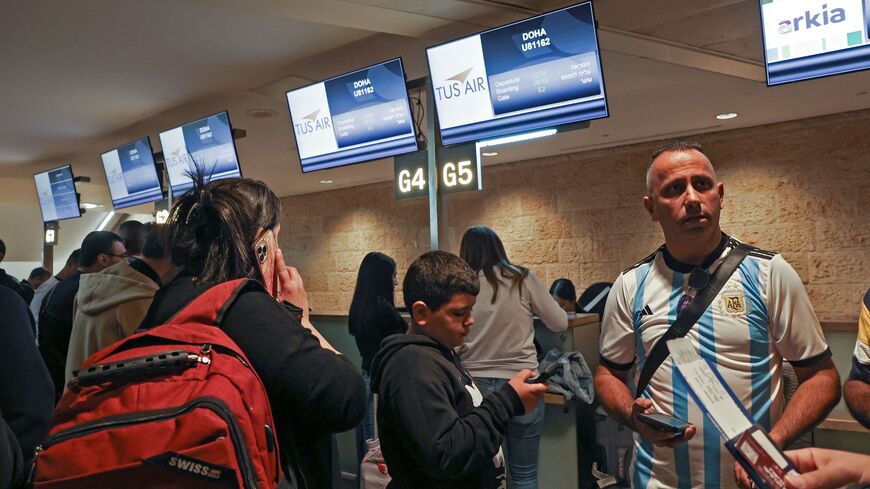 Football fans check in at a Tus Air counter in Israel's Ben Gurion International Airport in Tel Aviv, for a flight to Doha to attend the World Cup tournament on Nov. 20, 2022. - GIL COHEN-MAGEN/AFP via Getty Images

Thousands of Israeli soccer fans have traveled in recent days to Qatar for the World Cup.

The Israeli national team had qualified for the Cup only once, in 1970, but that hasn’t stopped Israeli soccer lovers from attending these events. Traditionally, Israelis root for the Argentinian, Brazilian, Dutch or British teams, but the Israeli commentators could not hold back their enthusiasm over the Saudi victory against Argentina and Lionel Messi. Several of them noted that the Saudis made the whole region proud. Designated Prime Minister Benjamin Netanyahu called Saudi blogger Muhammed Saud, known for his ties with Israelis, congratulating him on his country's win.

On Nov. 20, 180 Israelis made history, boarding the first direct flight from Israel to Qatar. The new route, operated by Cyprus-based TUS airways, was made possible because of a first-of-its-kind agreement between the two countries, mediated by FIFA (the international football association) especially for the World Cup matches.

As part of the agreement, for the first time since 2009, Israel was allowed to open a temporary consulate in Doha during the games to assist the thousands of visiting Israelis.

Clearly, this is an unprecedented experience for these travelers. They are able to fly to a Muslim country in the Persian Gulf  which has no diplomatic ties with Israel. Neither the lack of diplomatic ties, nor any cultural differences, deterred the Israeli soccer fans from making the journey. Apart from the direct flights (six round trips were scheduled, including the Nov. 20 flight), thousands of Israelis and Palestinians made their way to Qatar through Jordan or through the Emirates.

And yet, not everyone is happy to welcome them. Many fans, both local and from various other Arab states, are unhappy with running into Israelis or even hearing Hebrew spoken outside the stadiums and in the streets.

Ohad Hamo of Israel’s Channel N12 was surrounded by local soccer fans who chanted, “There is no Israel. There is only Palestine.” Hamo responded, “Israel is a fact on the ground.”

Journalist Tal Shorrer of Channel 13 News posted on Twitter that he was greeted with calls of “Israel out! Get out!” or “You’re Jews. No one likes you. Get out of here!” There are even accounts on social media platforms with names like “Youth Against Normalization,” which call on people to boycott any encounter with the “Zionist enemy” during the World Cup as a sign of support for Palestine.

On the other hand, many Israelis, including journalists, have also reported on positive encounters with soccer fans from Lebanon, and even from Iran.

The World Cup made its way also into the Knesset. Legislator Ahmad Tibi of the Arab Joint List made no effort to hide how happy he was to see the World Cup take place in an Arab state. In a speech in Arabic to his Jewish colleagues, he said: “Lose the sour faces. It’s an Arab state that organized and is hosting the best World Cup games in all of history!”