In a sign of strengthening relations, a first-of-its-kind symposium this week in Abu Dhabi discussed election results in Israel and the political and security climates there. 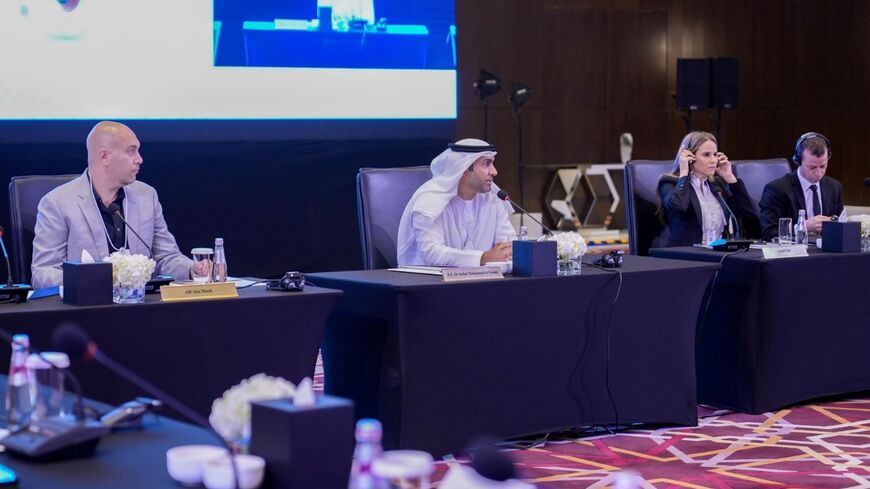 Al-Monitor correspondent Afif Abu Much (left) participates in the Emirates’ Center for Strategic Studies and Research forum on Israel in Abu Dhabi on Nov. 9, 2022. -

Abu Dhabi - The Emirates’ Center for Strategic Studies and Research (ECSSR) in Abu Dhabi hosted a symposium this week on the results of the recent Israeli elections and the implications for the region.

The symposium took place in the presence of the first Emirati ambassador to Israel, Mohamed Al Khaja, and the Israeli ambassador to the United Arab Emirates, Amir Hayek. Among the speakers were prominent Israeli journalists, as well as Israeli and American experts on Israeli politics.

Never before has an Arab state hosted a symposium with so many Arab and Israeli speakers to discuss an internal Israeli affair. It highlights the importance of the developing relationship between the UAE and Israel in the wake of the Abraham Accords.

Sultan Mohammed Al-Nuaimi, director general of the ECSSR, told the symposium that Israel and the Emirates are taking advantage of both countries' capabilities in economics, technology and other areas. He noted that the emerging bilateral relationship should serve the interests of both countries and the development of the entire region. He also noted that academics and research cannot be separated from other areas of cooperation.

The Israeli leadership will not miss an opportunity to hold up the relationship established by the Abraham Accords to the rest of the world, and the other side is also eager to learn as much as possible about Israel and its social and political complexity. I could feel this in the many questions I encountered as a participant in the symposium, and especially as a native Arabic speaker. This helped quite a few people feel more at ease in conversations with me about Israel.

Further evidence of the growing interest in Israel could be seen in the heavy coverage of the elections in the Arab world. Al Jazeera fed constant updates throughout the day on Nov. 1, much like the Israeli press. Other Arab outlets reported so frequently on the Israeli election that one might have thought it was a local one.

However, while Israeli tourists are traveling en masse to the UAE, especially to Dubai and Abu Dhabi, and posting about their trips on social networks, there is almost no tourism in the other direction.

Israeli diplomats suggest that this is a cultural question, and that tourism from the Emirates and Bahrain will surely increase, only at a slower pace.

Another reason could be the al-Aqsa Mosque, potentially the most interesting site for Muslim visitors to Israel. However, Palestinians are not always happy about seeing tourists from the Emirates at the third most important mosque in the world, because of the anger and betrayal Palestinians feel over the Abraham Accords.