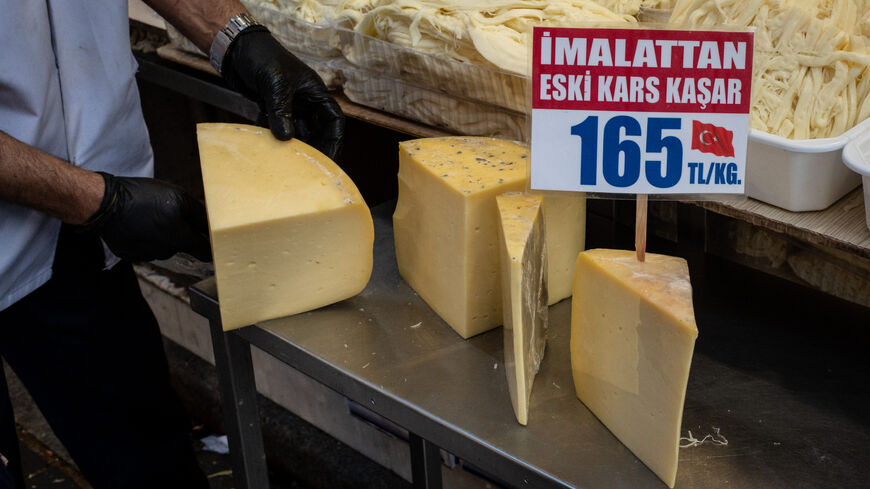 A man prepares cheese for a customer on a busy market street on Nov. 03, 2022, in Istanbul, Turkey. - Chris McGrath/Getty Images

Turkey’s annual consumer inflation climbed to a 24-year high of 85.5% in October as prices rose 3.5% month-on-month, the statistics agency announced Thursday amid growing doubts that it could be glossing over gloomier market realities.

Clothing, food and household equipment prices drove the surge in October, rising respectively by more than 8%, 5% and 4% from the previous month, data by the Turkish Statistical Institute (TUIK) showed.

Food inflation hit an annual of 99%, standing out among popular grievances in the run-up to crucial elections next year. The annual price increases topped 117% in the transportation group and 85% in housing expenditures.

The 85.5% consumer inflation — a staggering upsurge from about 20% in October 2021 — is Turkey’s highest since June 1998. In the G20 group of major economies, it is comparable only to that of crisis-ridden Argentina and is about six times the Dutch and Russian rates, the next highest.

Yet the TUIK data remains under widespread criticism at home for not reflecting the actual price increases in the market. Skeptics point to the widening gap between the TUIK figures and other inflation surveys such as the one conducted by the Istanbul Chamber of Commerce (ITO), which has monitored inflation in Istanbul, Turkey’s largest city and economic powerhouse, since 1927.

According to the chamber's Nov. 1 report, consumer prices in Istanbul rose almost 4% in October from the previous month and annual inflation hit near 109%.

Though the ITO survey covers only Istanbul and differs to some extent from the TUIK basket, its measurements used to be largely in unison with the TUIK’s overall figures for the country until a visible divergence began earlier this year. The gap, which stood at two percentage points in March, widened fast in the ensuing months to reach 23.5 percentage points in October. The growing divergence is seen mostly as the result of the TUIK tweaking data under government pressure.

Also, Turkey’s inflation rate has largely decoupled from that of the Turkish Republic of Northern Cyprus, which uses the Turkish lira and is heavily dependent on Turkey economically. The Turkish Cypriot consumer inflation hit an annual of 120% in September, soaring 37 percentage points above Turkey’s. The gap had stood at only five percentage points in January, when Turkish Cypriot consumer prices were up 53% year-on-year as opposed to a 48% rise in Turkey. Its expansion to 37 percentage in just nine months is rather perplexing.

Mistrust in the TUIK has led to the creation of the Inflation Research Group (ENAG), an independent team of economists that compiles and releases alternative inflation data. ENAG had put Turkey’s annual inflation at 82% at the end of 2021 as opposed to 36% announced by the TUIK. The gap has kept widening since then, reaching a whopping 100 percentage points in October as ENAG put annual inflation at 185.3%.

Though some critics dispute ENAG’s methodology as unscientific, its work has become a reference for many who doubt the accuracy of TUIK figures, including opposition parties as well as some economists and social scientists. The opposition media has come to routinely juxtapose the TUIK data to that of ENAG, which it releases simultaneously on monthly basis.