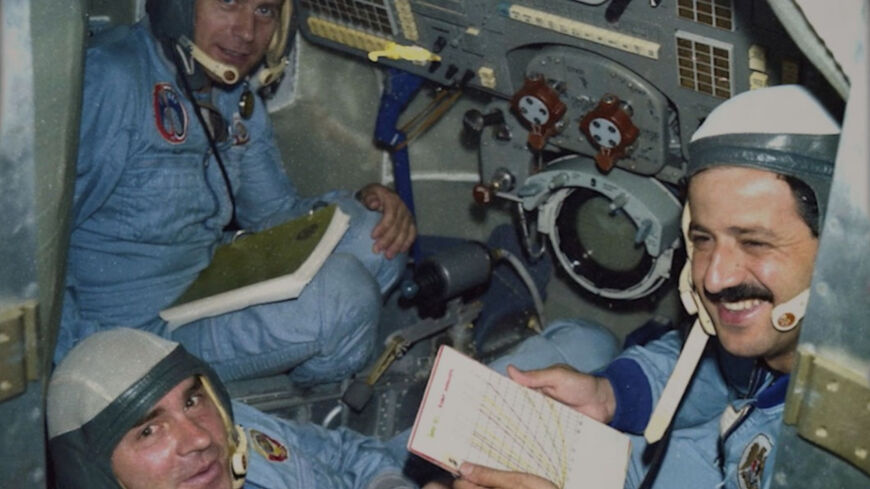 Muhammed Faris (R) is seen during the spaceflight aboard the Soyuz TM-3, July 1987. - Instagram/"The Syrian Cosmonaut"

The documentary "The Syrian Cosmonaut" (2022) opens with an animated scene showing Muhammed Faris hopping across the screen as if he was on the moon instead of in Istanbul being chased by assassins. Faris, the real-life spaceman, donned in black, is then seen looking into the camera, saying, “This is Syria’s story, not just mine.”

Faris became a Syrian national hero when he participated in the Interkosmos program in July 1987, becoming the first Syrian in space. Syrian President Hafez al-Assad had crushed a major insurrection by the Muslim Brotherhood in Hama a few years prior and wanted to reassert Syria onto the world stage through the Soviet-Syrian space expedition.

The 13-minute documentary directed by Charles Emir Richards traces Faris’ personal history to when he was a child in Aleppo, where on summer nights he would sleep on his roof staring up at the stars and wondering how he could reach them. He then became a fighter pilot in the Syrian army and became interested in space travel after hearing of Yuri Gagarin’s trailblazing journey beyond Earth’s atmosphere.

Faris spoke to Al-Monitor about the selection process for him to participate in the space program. Fifty Syrian air force pilots were selected and screened by a Soviet committee, with four of them being flown out to Moscow and on to the Baikonur Cosmodrome in southern Kazakhstan for training. After rigorous preparation, Faris was chosen to fly in the Soyuz TM-3 in 1987, the third crewed spaceflight to the Soviet space station Mir.

Faris had to practice for hours in a rotating chair that he coined "The Nightmare" in order to get used to floating around in space. “At first, the challenge was to achieve my dream of going into space. After being selected, the hard work actually started because all preparatory training was in Russian,” he said. Regrettably, he could not bring any Syrian food, but he did try to consume the dry space food that was closest in taste. However, more than Syrian food, he missed his family and his country during the training and the weeklong mission.

“Every time we passed over Syria, my whole body would shake. It looked so small. I missed and still miss my country. It is where my hopes and dreams are,” he noted. Everything changed when he saw Earth from space. “After coming back, I realized that everything I knew was just a small dot called Syria. The bigger picture: All humans live on the same planet and share life on it,” he said. Upon his return, he was awarded various titles including "Hero of the Soviet Union" and later the "Order of Lenin."

Richards told Al-Monitor what first got him interested in making "The Syrian Cosmonaut," saying, “One of my film students mentioned Faris in class. I thought it was so incredible he was at the peak of human technology; he was going to outer space and then he found himself as a refugee in Istanbul with assassins chasing him.”

Richards also saw that Faris could help audiences see space programs in a different light. “We always see outer space as the United States versus Russia. You never hear of anyone else in the space program,” he said. Faris, for example, brought the first recorded Earth dirt into space, taking a vial of Damascene soil.

Faris defected from the Syrian air force in 2012 and joined the opposition. He eventually fled to Istanbul where he was later appointed the Syrian Interim Government’s defense minister. He was deemed a traitor and the Syrian government removed his past scientific contributions from Syrian museums and textbooks. In Turkey, he participates in conferences, lectures students and gives advice to Turkey’s own space program. He said that he hopes space exploration will shift away from its predominantly military focus, and highlights, for instance, “the tens of thousands of satellites that block the sun from reaching Earth.”

The documentary was recently screened at the Antalya Golden Orange Film Festival and the Bosporus Film Festival in Istanbul, and will be featured at the Izmir Film Festival later this month. With anti-Syrian rhetoric and hate crimes on the rise in Turkey, the documentary touring around the country comes at a sensitive yet important time.

“We were expecting a backlash,” Richards said. “Not another refugee film.” Yet, during the Antalya festival, Richards recalled an audience member saying how he had had a lot of animosity toward Syrians in Turkey. “But the documentary had really confused him in what he thought he knew,” Richards recalled being told. “It appears to at least be breaking the ice.”

At the end of the documentary, Faris considers aloud, “If there are aliens, I think they would wonder why humans have this beautiful Earth with all the pleasures of life and yet they keep killing each other.”