The police of the Syrian National Army assaulted protesters near the city of al-Bab following civil protests calling for controlling the security situation in the city and holding the killers of a prominent activist accountable. 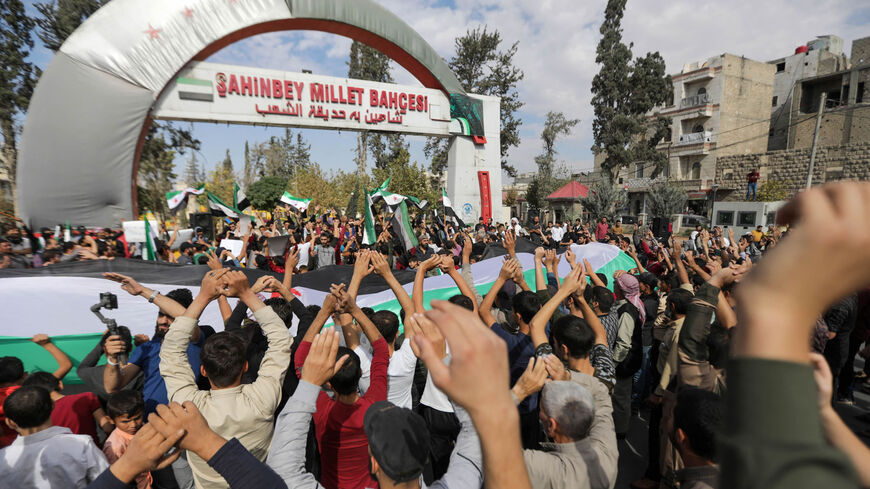 Fighters from the Syrian National Army (SNA) affiliated with the Turkish-backed Free Syrian Army (FSA) assaulted Nov. 16 civilians protesting in the city of al-Bab in the northeastern countryside of Aleppo. The protesters were calling for holding accountable the killers of media activist Mohammed Abdul Latif, nicknamed Abu Ghannoum, and his pregnant wife, purportedly shot dead by members of Al-Hamza Division, an armed opposition group linked to the SNA, in October.

On Oct. 7, Abu Ghannoum was killed in the city of al-Bab after he had repeatedly criticized Al-Hamza Division and exposed several corruption cases among the SNA.

The protests coincided with a series of Turkish airstrikes against various areas held by the Kurdish-led Syrian Democratic Forces in the countryside of Aleppo and in Raqqa on the evening of Nov. 19.

Moataz Nasser, a journalist-blogger who took part in the protests in al-Bab, told Al-Monitor, “At a sit-in dubbed by activists 'Day of Truth' and staged by peaceful protesters masked armed members affiliated with the security apparatus [of the SNA] destroyed the sit-in tent, following orders by Lt. Col. Youssef al-Shibli. They attempted to suppress the protest by force, but the protesters confronted them, pushing the commando forces to use pepper spray directly against the protesters and threaten to shoot at them with live fire.”

He said, “We want to reveal all the circumstances and facts surrounding the assassination of Abu Ghannoum and his family and we seek a fair punishment of the criminals. We want the factions to stop interfering in the city's administrative affairs. A security plan must be set up to control the situation in the city in cooperation and coordination with the local residents. The FSA-controlled area enjoys relative freedom of expression more than the areas controlled by the Syrian Democratic Forces, Hayat Tahrir al-Sham and the Syrian regime, albeit not to an ideal extent. This is mostly due to the efforts of the peaceful civil movement and to the revolutionary activists who are combating corruption and violations.”

Shibli, head of the security apparatus in al-Bab who is accused of leading the attacks against the protesters, told Al-Monitor, “We dispatched our patrols to protect the protest from any intrusion. This is a routine procedure for all protests and sit-ins. The protesters refused to remove the tent that obstructed the movement of citizens and altercations took place between the police forces and the protesters that escalated into a clash. We already apologized for what happened.”

He affirmed that the security members who caused the clashes were held accountable and that some of them were sentenced to imprisonment.

Shibli concluded, “We protect media activists and hold accountable any security member who offends any civilian or media activist or figure. Separate clashes have occurred and they have been addressed. Our offices are open to anyone who wants to file a complaint against any police official. We did not want to disperse the protest. Everyone has the right to stage peaceful protests. We support the judicial investigations into the murder of Abu Ghannoum and his wife, and we will punish anyone proven to be linked to this crime.”