Syrian children in Idlib take part in their own World Cup

Refugee and internally displaced children in Idlib are taking part in the "Camps World Cup" event, to shed light on their suffering. 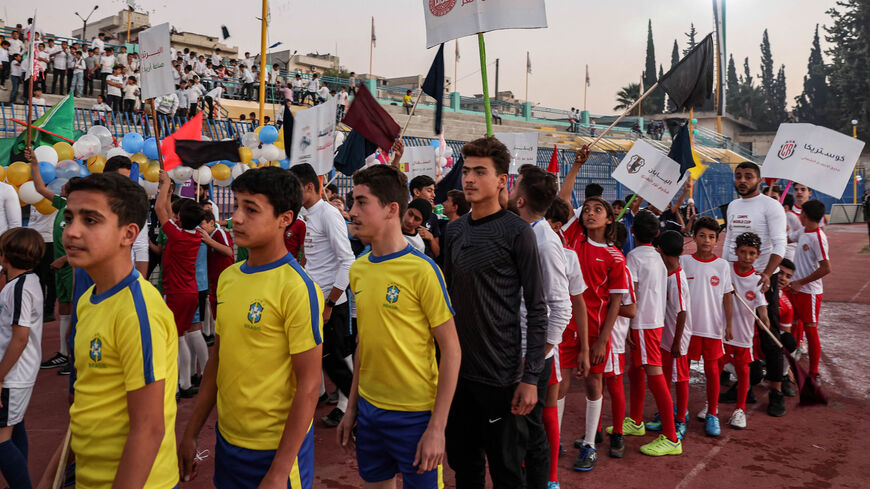 Hundreds of children aged 10 to 14 from the camps for internally displaced persons (IDP) and industrial zones in northwest Syria kicked off their own World Cup tournament at the municipal stadium of Idlib Nov. 19, which the Syrian Salvation Government affiliated with Hayat Tahrir al-Sham inaugurated a few days before.

The event, dubbed “Camps World Cup,” will run in parallel with the FIFA World Cup Qatar 2022.

The Violet Organization, a humanitarian nongovernmental relief organization, organized the event in Idlib with the aim of shedding light on the difficult living conditions of children in northwest Syria, specifically in the IDP camps.

A total of 32 teams will wear the official jerseys of the national teams currently participating in the Qatar World Cup. The first game in Idlib stadium was held between the children's teams representing Qatar and Ecuador, the same as the opening match in Qatar.

Hassan Mutaweh, a child from Idlib city who sells biscuits and who is playing in the tournament, told Al-Monitor, “I am trying to put food on the table for my siblings after my father was killed in an airstrike years ago. It is my job to provide for my family. Every day, I start selling my biscuits from a garage in Idlib, before I head to the city center. Some days, I am forced to go to Sarmada on the Syrian-Turkish border and other areas to sell biscuits. I am very happy when I manage to sell two boxes of biscuits a day.”

He said that he had dropped out of school more than six years ago to provide for his siblings.

“When I have to train or play a game at the stadium in Idlib, I stop working and play soccer instead, which I love,” he said.

Mutaweh said that he had scored a goal during the opening game, noting, “I hope my team will make it to the finals to raise the name of my martyred father, Safwan Mutaweh.”

Ibrahim Sarmini, director of the protection program at the Violet Organization, told Al-Monitor that the "Camps World Cup" kicked off with the participation of 256 children distributed over 32 teams, similar to the Qatar World Cup. The children come from 25 camps and seven different industrial areas, he said.

“The residents of the camps are very excited to watch the games at the event held here [in Idlib], and they are following the teams that represent their camps to see who will win,” Sarmini noted.

He explained that the training lasted six months, adding that the children from industrial zones, who are part of the organization’s protection program, were selected to take part in the event because they are among the most vulnerable groups as they are exposed to high-risk work-related injuries, including with sharp objects.

The "Camps World Cup" will continue until the finals in Qatar, with the final match being organized in one of the camps in Idlib province.

Meanwhile, Qatar has opened five centers in Idlib and Aleppo countryside as part of a humanitarian initiative to allow people to watch the World Cup matches for free.

In addition, the Qataris have also set up 10 fan zones for refugees and IDPs in eight different countries.

An official working as part of the Qatari project in Syria told Al-Monitor on condition of anonymity that the fan zone initiative aims to entertain the besieged Syrians, since there are many people who like soccer but do not have TV or internet access.

He said that the viewing centers are located in the cities of Azaz, al-Bab and Afrin in Aleppo province, al-Mahmadiya camp in Afrin countryside and al-Dana city in Idlib province.

Qatar, which is hosting the FIFA World Cup between Nov. 20 and Dec. 18, is the first country in the Middle East and the Arab world to host the international soccer championship.