Turkish analysts believe that the enthusiastic handshake between Sisi and Erdogan may facilitate the budding rapprochement but will not be a magic wand, particularly in Libya. 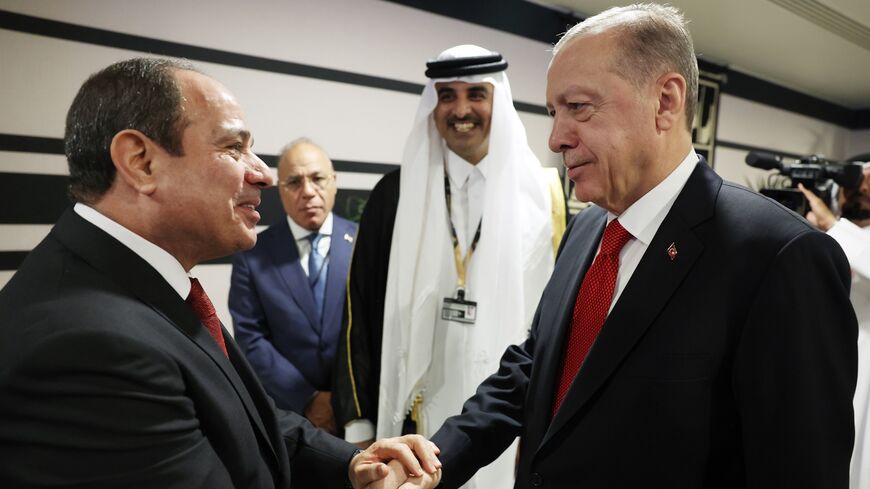 Brushing aside name-calling and accusations of the past, the Turkish and Egyptian presidents shared an enthusiastic handshake on the sidelines of the opening ceremony of the 2022 World Cup in Qatar and followed it with claims of a “new era” in the ties that have been strained for the last decade.

Egyptian President Abdel Fattah al-Sisi’s spokesman, Bassam Rady, said late Monday that the handshake between the two presidents “would be the beginning of the development of bilateral relations.” Turkish President Recep Tayyip Erdogan echoed the same tone on his way back from Qatar, saying further actions would follow to rebuild relations between Cairo and Ankara. “The historical ties between the Turkish and Egyptian peoples are very important for us. What prevents it from being so again? We have provided proof of our good intentions,” he told journalists on the plane.

But for many experts, it is doubtful whether the jovial photo is a harbinger of a quick rapprochement between the two estranged Middle Eastern heavyweights. Despite recent efforts of normalization, ties between Ankara and Cairo still carry the strains of a nosedive in 2013 after the Egyptian military overthrew Mohammed Morsi, president and leader of the Muslim Brotherhood. Erdogan, whose Justice and Development Party (AKP) has ties with the Muslim Brotherhood, repeatedly attacked Sisi as a putschist and tyrant, leading Egypt to announce that it scaled back its diplomatic relations with Turkey to the level of charge d'affaires.

“The photo of the two presidents shaking hands is high in news value but low in consequential value,” Safak Gokturk, Turkey’s former ambassador to Cairo, told Al-Monitor. Gokturk pointed out that despite Ankara’s efforts, the rapprochement with Egypt moved slower than any other regional normalization process, such as with the United Arab Emirates, Saudi Arabia and Israel.

The main stumbling block is the competing interests in Libya where Ankara is allied with the Tripoli-based government while Cairo supports the eastern parliament in Tobruk. The two countries came to the brink of war in the summer of 2020, with Turkey’s mili­tary intervention in the Libyan civil war and Cairo’s threat of interceding with troops in the event of further advances by units of the then-internationally recognized government backed by Ankara.

“Both sides seem interested in an arrangement. But it is unclear what this might look like. It is difficult to imagine any grand bar­gain. For Egypt, a long-term Turkish military presence in Libya would be hard to accept. Conversely, a complete withdrawal of Turk­ish units would be an unlikely option for President Erdogan,” wrote Hurcan Asli Aksoy, deputy head of the Center for Applied Turkey Studies at the German Institute for International and Security Affairs in Berlin in her paper “A Thaw in Relations between Egypt and Turkey.”

The handshake between Sisi and Erdogan was unexpected for several reasons: Only three weeks before the two presidents' meeting, Egypt’s Foreign Minister Sameh Shoukry announced that talks with Turkey, where senior diplomats came together to improve ties, had come to a halt over Turkish policies in Libya. The so-called exploratory talks between the two sides, carried out by the country’s deputy foreign ministers, have been held twice — in Cairo in May 2021 and Ankara in September 2021. Shoukry’s announcement of a halt in talks, made several weeks after Turkey and the Libya government in Tripoli signed a hydrocarbons deal, was also one of the reasons that the meeting between Erdogan and Sisi came as a surprise. Another reason was that Erdogan, on his way back from Bali where he attended a G20 meeting, said that while he may meet and turn a new page in ties with Sisi and also Syrian President Bashar al-Assad, it would be after the elections, meaning in the second half of 2023.

“Qatar organized the encounter as a demonstration of the country’s desire to use the World Cup as a platform of diplomatic encounters and fence-building,” Sinan Ulgen, chairman of the Istanbul-based Center for Economic and Foreign Policy Studies (EDAM) and a former diplomat, told Al-Monitor. In the photo, Qatari Emir Tamim Bin Hamad Al Thani beams at the two men as they shake hands.

“But it is not simply Qatar’s organization; both sides had been working on this for some time now, trying to pick up a time and place for the two men to meet,” Ulgen added.

Various gestures on both sides made the meeting easier to arrange. 2022 has seen Turkey’s moves to tighten the grip on Muslim Brotherhood leaders and media organs, as well as moves to boost trade between the two countries. In May, Treasury and Finance Minister Nureddin Nebati traveled to Egypt to attend the annual meeting of the Islamic Development Bank Group, which made him the first minister to travel to Egypt in nine years.

While Erdogan did not attend the COP27 summit in Egypt, he wrote a letter to Sisi, explaining his absence and wishing him success in hosting the international event, according to independent news agency ANKA. Following the Istanbul blast last week, the Egyptian Foreign Ministry was among the first to condemn the attack. The ministry called for all countries worldwide to “maintain solidarity in the face of this hateful phenomenon and to drain its sources of support financially, intellectually or in any way.”

While the top-level meeting partially overcomes the “bad blood” between the two pragmatist leaders, it is unlikely that it will be a magic wand to solve the bilateral problems.

There are three essential elements for a comprehensive rapprochement, Ulgen told Al-Monitor. “While there is some progress on Egypt’s request from Turkey to halt the activities of the Muslim Brotherhood members, the erosion of trust between the two countries is far too great to be overcome by a handshake,” he said. “The second — and the overwhelming issue — is Libya, a country essential for Egypt’s security perception. Turkey’s political leaders extend support to the Islamist groups, including those close to Muslim Brotherhood, which is impossible to accept for Cairo. But Turkey cannot backpedal there either because it needs those groups to stay in power to maintain the [maritime delimitations and gas and oil exploitation] agreements it has signed. Then there is the third issue, which is the energy alliance formed by Egypt, Greece, the Republic of Cyprus and Israel, who founded the East Mediterranean Gas Forum, which leaves out Turkey.”

While talking to journalists on his way back from Qatar, Erdogan said, “Our only request from [Cairo] is to establish peace in the Mediterranean, despite those who take a stance against us,” referring to Greece.

“The Turkish position is to improve relations with the littoral states of the East Mediterranean as tensions with Greece and Greek Cypriots are on the climb,” Aksoy told Al-Monitor.

Aksoy pointed out that certain aspects of Egypt-Turkish ties have been untouched by the political strain in ties. “Intelligence sharing has been ongoing; the economic relations have always been strong,” she said, referring to the fact that Turkey is Egypt's third-largest importer of goods, while Cairo is Ankara's largest trading partner in Africa.

In Ankara, Erdogan’s meeting has come under heavy attack by the opposition, which mocked what they called the president’s “volt-face” toward Sisi. “Erdogan is kissing the face he spit on,” tweeted Ozgur Ozel, a senior member of the main opposition Republican People’s Party (CHP), while Kemal Kilicdaroglu, the CHP chair, said that the whole world laughed at Erdogan’s efforts to make friends with the very people he insulted a few years ago.

However, Devlet Bahceli, Erdogan’s political ally, expressed vocal support for the president’s meeting with Sisi, adding that Assad should be next.

“We think that restoring relations with President Sisi in Qatar is the right move, and the relations should be taken further. We also think Turkey should make a similar move toward Syria Arab Republic President Assad. We need to form a common will against terrorist organizations,” the Nationalist Movement Party chair said in parliament Tuesday.