Far-right politician Bezalel Smotrich and ultranationalist Itamar Ben Gvir, both likely to serve in Israel's next Cabinet, are ramping up their attacks on human rights organizations. 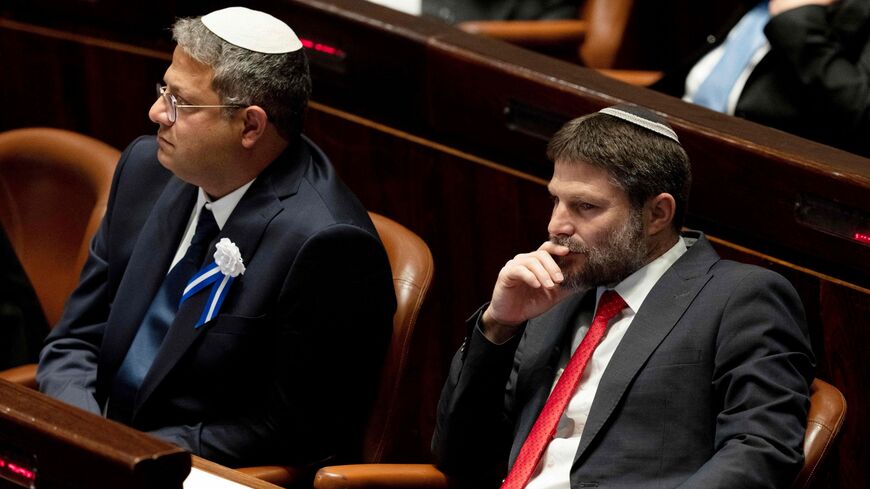 Israeli right wing Knesset member Itamar ben Gvir (L) and Bezalel Smotrich (R) are pictured during the swearing in ceremony of the new Israeli government at the Knesset (Israeli parliament) in Jerusalem, on Nov. 15, 2022. - MAYA ALLERUZZO/POOL/AFP via Getty Images

Far-right legislators, including those set to become ministers in Benjamin Netanyahu’s new government, are multiplying their attacks against human rights groups and against Israeli Arab legislators.

Likud Knesset member Nissim Vatori reacted this morning to the double bombing attack in Jerusalem, saying that the Arab Knesset members must be removed from the Israeli parliament. He accused them of encouraging terror attacks.

On Nov. 21, right-wing political leaders held an event in the Knesset under the hyperbolic title, “Human Rights Organizations Being Run by Hamas.” Based on the content of the speakers’ remarks, changes to the status of human rights groups could be felt very soon.

The discussion was organized by the group Ad Kan in response to reports on TV about human rights groups operating in the West Bank. It was claimed that these groups are, in reality, undermining the State of Israel.

The speakers at the event took this one step further. They also discussed Israeli groups and NGOs, including the New Israel Fund, Breaking the Silence, and Peace Now, all of which have been an integral part of Israeli society for decades.

According to Religious Zionism party leader Bezael Smotrich, who could soon serve as finance minister and member of the Security Cabinet, “Today we realize how powerful the threat [these human rights groups] pose really is, just like the radical nationalist trends among the Arab sector in Israel. That also began small, only to grow and develop over time.” He then added, “A state that is able to fire a missile through the window of a room in Gaza by using precise information and adapting the weapon’s load to the size of the room. ... should be able to do this too.”

Likud Knesset Member Amichai Chikli said, “Under the guise of human rights groups engaged in humanitarian acts, lies a radical anti-Semitic and anti-Zionist ideology, whose entire purpose is to challenge the legitimacy of the State of Israel and justify the killing of its soldiers and citizens.”

Other speakers from the Likud and the Religious Zionism party made similar remarks, while promising to mend the current situation through legislation and ordinances.

Ultranationalist legislator Itamar Ben Gvir, likely to soon serve as public security minister, has been waging a struggle for years against these organizations. Reports on the ongoing coalition talks reveal that Ben Gvir is demanding expanded power over police, transferring some of the responsibilities of the police commissioner to the minister himself.

“Smotrich recognizes that these human and civil rights groups will be stubborn opponents of the steps he plans to take in order to sabotage democracy, the rule of law, and human rights,” said Rabbi Noa Sattath, executive director of the Association for Civil Rights in Israel. “We will confront him to defend human rights. We are ready for this. We have all the supporters of democracy in Israel on our side.”

Labor Party leader Merav Michaeli also responded to Smotrich, saying, “This is a clear and obvious attempt to eliminate the democratic side of the State of Israel and make it subject to the force that is now called ‘Jewish.’ This is an unrestrained use of force by people who are now strong.”