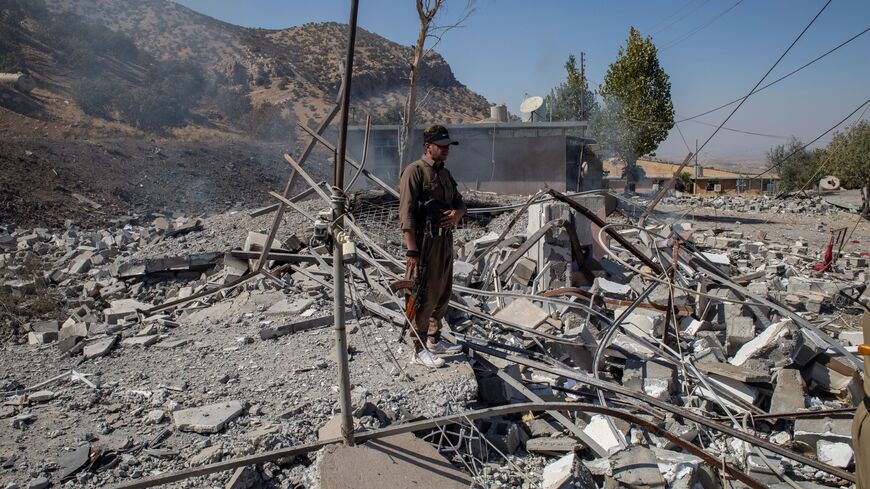 A member of Komala opposition party stands in the remains of what used to be their headquarters a few hours prior. Iranian missiles and drones struck multiple headquarters of Kurdish opposition groups in the KRI on Sept. 28, 2022 in Sulaymaniyah, Iraq. - Hawre Khalid/Getty Images

Iran's semi-official Tasnim news agency, which has close links to the Islamic Revolutionary Guard Corps (IRGC), announced today that the attacks on Iranian Kurdish opposition groups in Iraqi Kurdistan will continue until these groups are disarmed or leave the region completely.

The news agency quoted an unnamed military official as saying that yesterday's attack was the beginning of series of operations under the name of Rabi’ 2, which will continue until Tehran reaches its goal.

Iran has been bombing the region for months. Previous attacks were organized under a long operation called Rabi’s 1.

The IRGC had warned previously that it could invade the autonomous Kurdistan region in northern Iraq if the opposition threats continued.

In a phone call yesterday, Iranian Foreign Minister Hossein Amir-Abdollahian told his Iraqi counterpart, Fuad Hussein, “The Islamic Republic does not expect to be threatened by the Kurdistan Region of Iraq, and the central government is responsible for these actions."

The call followed the Iraqi foreign ministry's condemnation of the Iranian attack.

The attacks on the region have increased significantly following the rise of protests in Iran about two months ago. Iranian authorities accuse the Kurdish opposition in Iraqi Kurdistan of being behind the unrest in Iran. The military official told Tasnim that 100 people with connections to the Kurdish opposition have been arrested in Iran so far.

Iran had targeted Erbil, the capital of the Kurdistan region, last June before the protests erupted, under the pretext that Israel was conducting activities against Iran in the area.

Kurdistan was also a frequent target of Iran-backed militias in Iraq during the first half of this year when the Kurdistan Democratic Party was in alliance with Muqtada al-Sadr, who was working on eliminating Iranian militias from the new government. The attacks by drones and Katyushas stopped when the KDP formed an alliance with the Coordination Framework and finally formed the new government in Iraq.