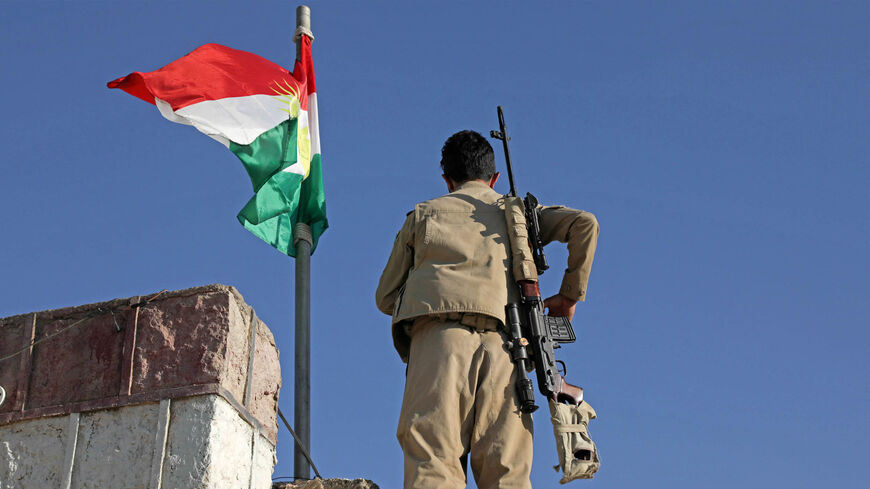 SULAIMANIYAH, Iraqi Kurdistan — Iran’s Islamic Revolutionary Guard Corps (IRGC) bombed the Koysinjaq area in both Erbil and Sulaimaniyah provinces on the morning of Nov. 14. At least five rockets hit both sides of the border between the two provinces, injuring many residents, according to the local health authorities. Two deaths have been reported so far.

Maj. Gen. Mohammad Hossein Bagheri, chief of staff of the Iranian armed forces, said Oct. 16, “We will never accept that 3,000 armed men on the other side of the Iranian border have factories to produce bombs. We will carry on with the operations targeting them, and there will be large-scale operations,” in reference to the Iranian opposition in Iraqi Kurdistan.

On Oct. 12, Saudi Al-Sharq Al-Awsat newspaper quoted sources in Tehran as saying, “The IRGC announced that its ground units are ready to carry out limited operations targeting the sites of the opposition Komala party and the Kurdistan Democratic Party [KDP].”

This is not the first time that Iran threatens to invade Iraqi Kurdistan. In 2016 and 2021, it threatened to invade the Kurdistan Region, which borders Iran through the city of Sulaimaniyah. The latter is controlled by the Patriotic Union of Kurdistan, led by Bafel Talabani, son of former Iraqi President Jalal Talabani.

In an interview with the official website of Iran’s Supreme Leader Ayatollah Ali Khamenei — khamenei.ir — on Nov. 10, Iranian Minister of Intelligence Esmail Khatib accused foreign actors including the United States, Israel, Saudi Arabia and several other regional parties of being involved in Iran's ongoing “riot.”

On Sept. 1, Irfaasawtak news site quoted Khaled Wanosheh, a leading figure in the opposition KDP, as saying, “The IRGC continues to mobilize soldiers, tanks, heavy artillery and all kinds of weapons and equipment, in the heights stretching between [the border areas of] Bradost and Qilsheen, as well as other parts overlooking the villages in Seidkan district, up to the heights facing Mount Halgurd [that is also on the border with Iran].”

In an Emirates Policy Center’s study published May 11, Iraqi researcher Diyari Salih wrote, “It is not unlikely for the IRGC to carry out a military invasion of some border areas in Erbil governorate under the pretext of undermining sources of threat to Iran’s [national] security. Despite the fact that the Iranian opposition, which is present in some parts of Erbil, has not represented so far any serious threat to Iran’s national security.”

Iran followed in Turkey’s footsteps in the military attacks targeting the Kurdistan Region. Iraq's two neighboring countries justified their attacks due to the presence of Iranian and Turkish opposition parties.

The security situation in the Kurdistan Region has been unstable for weeks due to the ongoing Iranian and Turkish attacks. This would worsen if Iran follows Turkey’s footsteps in operating ground assaults, too.

He noted, “The available information does not point to the possibility of any attack, nor to a large-scale military build-up of the IRGC on the border. So far, there has not been any attempts to launch a ground attack.”

Yawar spoke of a lack of information at present about Iran’s intention to launch military ground attacks on the Kurdistan Region, but he did not deny the presence of an Iranian plan or idea to attack the region and enter its territory, as the Turkish forces did in the past five years.

Human Rights Watch spoke to local residents and witnesses in Iraqi Kurdistan about the recent Iranian bombardments of the villages and towns in the past weeks. “Some of the attacks by the Iranian Revolutionary Guard on Iranian opposition party offices in the Kurdistan Region of Iraq struck towns and villages where the parties were not carrying out any military activity,” according to local residents.

The continuous missile attacks by the IRGC from Iran toward Iraqi Kurdistan has raised fear among the locals that they could turn into a military ground attack similar to the Turkish incursion into Iraqi territory.

Iran is seemingly seeking to have official forces in Iraqi territory, as Turkey did in Ninevah and in other parts of Iraqi Kurdistan. This is linked to other files, including a war against Iran's opposition inside Iraqi territory and the pressure on the Kurdistan Region following the gas sales to Turkey, which has caused the Kurdish gas to compete with the Iranian gas marketed to Turkey.

In conclusion, the large-scale Turkish incursion into northern Iraq has motivated Iran to seek geographical influence in the Kurdistan Region, particularly since it has the pretext that would justify its action, including the presence of Iranian opposition parties or the so-called “Israeli spying headquarters.”