Several areas of the Kurdistan Region of Iraq were targeted overnight after an IRGC commander warned of possible ground invasion and the Iranian ambassador set out demands. 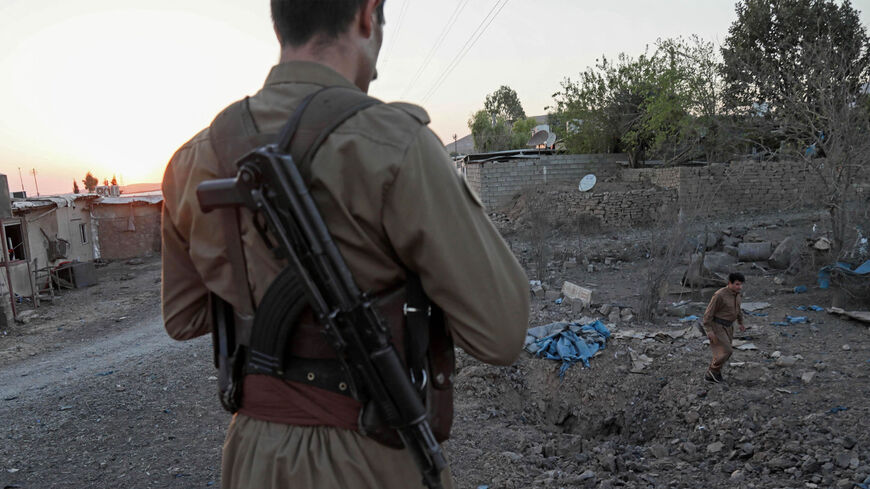 ERBIL, Iraqi Kurdistan — A massive orange fireball lit up the sky in an area outside the capital of the Kurdistan Region of Iraq on the night of Nov. 20-21, as sirens sounded at the US Consulate within the city itself.

In the early morning hours of Nov. 21, reports trickled in of rockets and drones that had targeted several areas of the autonomous region bordering Iran to its east.

The attacks came amid surging tensions across the region.

During a recent visit to Baghdad, the commander of the Quds Force in Iran's Islamic Revolutionary Guard Corps (IRGC), Esmail Ghaani, threatened a military ground operation in the Kurdistan Region if "the Iraqi army does not fortify the countries’ shared borders against Kurdish opposition groups," the Associated Press reported Nov. 18.

Iranian Ambassador to Iraq Mohamad Kadhim al-Sadiq had prior to the attacks, on Nov. 20, discussed his government’s demands in negotiations between the two countries, according to local media outlets.

Sadiq said that the new Iraqi government under Prime Minister Mohammed Shia al-Sudani had asked for extra time prior to disarming Iranian opposition groups in its territory.

"We stipulated that the Iraqi side should maintain the borders of the central government,” since the borders are not controlled on the Iraqi side by the Kurdistan Regional Government (KRG), the Iranian ambassador reportedly stated.

He continued, "Among the conditions is also the disarmament of the Iranian opposition and their return to the camps as refugees," noting that his government was also demanding that those wanted by the Iranian judiciary be handed over.

A photo of a 22-year-old fighter from a Kurdish-Iranian opposition group in exile with bases in Iraqi Kurdistan who had reportedly been killed in the attack appeared online in the early morning hours of Nov. 21, but no official confirmation had been received by the time of publication of this article.

Social media accounts linked to the Iran-led regional "muqawama" (resistance), factions claimed the young man was a “leader” in the “terrorist group.”

The IRGC have accused Iraq-based Kurdish armed opposition groups of "attacking and infiltrating Iran … to sow insecurity and riots and spread unrest."

Earlier, a KRG media officer had tweeted, “Tonight, rockets and drones targeted several areas in the Kurdistan Region. Mainly targeting Koya and Bahrka [Baharka] towns, and several other areas aiming to target the Iranian opposition groups. So far, Ministry of Health has not recorded any casualties.”

Erbil Mayor Nabaz Abdulhamid told local media outlet Kurdistan 24 that two drones had “crashed in the Jazhnikan camp in Baharka village in Erbil [province],” but that there were no casualties.

The same outlet reported on the morning of Nov. 21 that the camp, which houses Kurdish-Iranian refugees, had been evacuated “following the Iranian suicide drone attacks.”

The district of Koya, aka Koysinjaq, is located in Erbil province but is closer to the Iranian border than Erbil. The district capital of the same name has a population of fewer than 50,000 people.

Videos circulated online of panic caused at a university in the town following the overnight attacks.

It continued, “These indiscriminate attacks are occurring at a time when the terrorist regime of Iran is unable to stop the ongoing demonstrations in Kurdistan.”

Several other attacks have targeted the Kurdistan Region since mass protests broke out in Iran following the Sept. 16 death in custody of a young Kurdish woman who had been reportedly subjected to severe beatings.

In late September, Iranian attacks killed "13 people — including a pregnant woman — and wounded 58, most of them civilians, including children," Iraqi Kurdistan counterterrorism services said in a statement, as Al-Monitor reported at that time.

"More than 70" strikes were carried out by Iran on Iraqi territory in the Kurdistan Region using "ballistic missiles" and armed drones, it continued.

US Central Command (CENTCOM) spokesperson Joe Buccino had also noted at that time, “US forces brought down an Iranian Mojer-6 Unmanned Aerial Vehicle headed in the direction of Erbil as it appeared as a threat to CENTCOM forces in the area.”

The United States maintains an “advise, assist and enable role” in Erbil, Baghdad and at Ain al-Asad base in western Anbar after an official transition at the end of last year.

The tempo of attacks — and threats of more substantial military action — by Iran against the Kurdistan Region have increased since September, but many others were conducted in the previous months as well with different justification provided.

The IRGC took responsibility for an attack on Erbil involving at least a dozen ballistic missiles in the early morning hours of March 13.

The IRGC had after that attack claimed to have hit "a strategic center" for Israeli spies.

A KRG statement noted in relation to the latest attack, “Iran’s repeated violations of the sovereignty of Iraq and the Kurdistan Region of Iraq are inexcusable and a gross infringement of international law and neighborly relations.”

It continued, “We call on the Republic of Iran to stop this violent campaign against the Kurdistan Region. Stability will never be achieved through violence.”